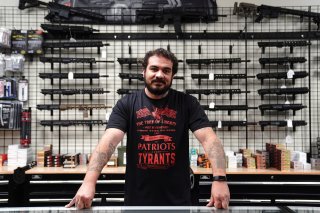 With more than twenty million in consumer hands, the ubiquitous AR-15 has remained the most popular category of rifles sold in the United States. That fact likely isn’t good news to the likes of Joe Biden or Beto O’Rourke, who have called for bans on the popular category of modern sporting rifles. The automatic rifle market shows no signs of slowing down. In fact, throughout the pandemic, the automatic rifle was among the top-selling firearms.

One factor for the continued popularity of the modern sporting rifle is that the modular platform can allow shooters to build their own firearms from a selection of parts, while there are plenty of off-the-shelf options for all budgets. There is a difference between affordable and cheap, however, and the expression “you get what you pay for” all too often rings true with firearms, as the AR market is filled with many cheap automatic rifles.

However, American Tactical a firearms manufacturer in Summerville, South Carolina, has carved out a niche with rock bottom prices that aren’t rock bottom in quality. This month the boutique gun maker introduced its Alpha-15, a budget-friendly AR-15-pattern carbine that is the newest rifle in the company’s expansive product line.

At just 5.51 pounds unloaded, it weighs less than many rifles in the class. Chambered in 5.56, it is able to deliver both power and accuracy in a surprisingly lightweight package. Its barrel length is a full 16 inches and features a 1:8 twist with pencil style 4150 CRMOV.

The Alpha-15 further includes a carbon fiber-infused buffer tube and a nanocomposite trigger kit, and it comes with a 30 round American Tactical polymer magazine, an 8-inch MLOK rail and flip-up sights.

American Tactical has also strived to keep the weight of the Alpha-15 by its minimal use of metal parts. While this hasn’t impacted the quality, it is a firearm that could be an ideal option for coastal areas, southern areas with high humidity and maritime use. This unique composition also greatly reduces the overall weight of the Alpha-15, allowing it to achieve the impressive 5.51-pound total weight.

While fans of Colt, Smith & Wesson, Daniel Defense and Armalite may not likely be swayed by the lower cost Alpha-15, for those looking for a quality entry-level AR-15, this might just be the one.