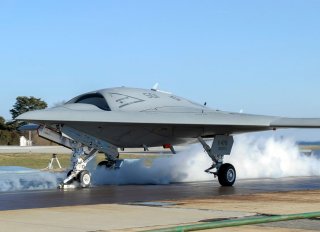 Key point: These drones share technology that was discovered before but is only now being put to full use. Here's how it happened.

The U.S. Navy’s new MQ-25 Stingray aerial-refueling drone bears an uncanny resemblance to an experimental U.S. military plane from the late 1970s. And that similarity could point to the way for the Stingray’s potential evolution from a tanker into a stealthy surveillance and strike aircraft.

On Aug. 30, the Navy awarded Boeing an $805-million contract for the construction of the first four MQ-25s. The service hopes to acquire as many as 72 MQ-25s as part of a $5-billion acquisition effort.
The Stingray should begin assuming tanking duties aboard the Navy’s 10 aircraft carriers in the mid-2020s, freeing up F/A-18E/F strike fighters currently handling the refueling mission.

But the MQ-25 could do more than merely refuel other aircraft. The Carrier-Based Aerial-Refueling System competition that produced the Stingray is just the latest version of a drone-development effort dating to the early 2000s. For more than a decade, that effort aimed to field carrier-launched drones for air-to-ground attack missions and intelligence, surveillance and reconnaissance, or ISR.

To save money and simplify development, the Navy in 2016 decided its first carrier drone would be a tanker. “The intent is to significantly reduce development timelines from contract award to initial operational capability by five to six years,” the Navy explained in a statement. “By reducing the number of key performance parameters to mission tanking and carrier suitability, industry has increased flexibility to rapidly design a system that meets those requirements.”

But a year later, there was still talk of the MQ-25 eventually growing back into its original attack and ISR roles.

“The Navy expects to provide primarily aerial refueling and ISR capabilities first, while using open systems standards to support incremental capability upgrades in the future like adding the capability to receive fuel, weapons and improving radars,” the Government Accountability Office explained in a 2017 report.

Boeing clearly expects the MQ-25 to grow. While the tanking mission doesn’t require significant stealth, ISR and attack missions do require stealth. And the Stingray’s airframe is inherently low-observable. After all, it shares key features with the Tacit Blue stealth demonstrator that first flew in 1978.

Built by Northrop Grumman and overseen by the Defense Advanced Research Projects Agency, Tacit Blue embodied a new approach to radar low-observability. DARPA’s previous stealth demonstrators, built under the Have Blue program that ended in 1979, relied on a heavily-faceted airframe to scatter radio waves and avoid returning a clear radar signal. By contrast, Tacit Blue tested curved surfaces and a unique, top-mounted air inlet to achieve the same effect.

The Tacit Blue demonstrator, currently residing at the Air Force Museum in Ohio, is 56 feet long — 15 feet longer than the MQ-25 is — and features a one-person cockpit. Other than that, the two aircraft are eerily similar, with similar thin, gently-swept wings; outward-canted twin “butterfly” tails: smooth, round contours and flush, dorsal inlets. “Like a butter dish with wings,” according to Northrop.

DARPA pitched Tacit Blue as a stealthy battlefield-surveillance plane. But the butter-dish plane, known to its creators and crews as “Whale,” proved finicky. “Many engineering problems had to be overcome,” Northrop stated.

For one, Tacit Blue was extremely difficult to fly. “You’re talking about an aircraft that at the time was arguably the most unstable aircraft man had ever flown,” John Cashen, a Northrop engineer who worked on Tacit Blue and many of the company’s other stealth aircraft designs, told Air Force Magazine.

When the 707-based E-8 proved to be safer, cheaper and more effective for battlefield surveillance, the Air Force and Northrop instead mined Tacit Blue’s technology to support other development efforts. “The program turned into a test-bed because its low-observable technologies proved to be more valuable than its [mission] contribution,” George Muellner, then an Air Force lieutenant general, said during Tacit Blue’s public unveiling in 1996.

Tacit Blue contributed to the development of the B-2 stealth bomber, helping to give the bigger plane its smooth, round shape and buried inlets. Northrop’s YF-23 stealth fighter demonstrator borrowed Tacit Blue’s tail and engine outlet design.

The Stingray could become much more than just a tanker. It already has the shape for it.