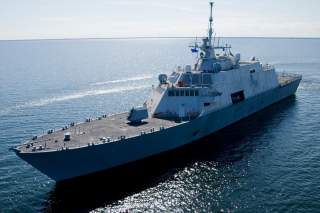 Any such assault, the results of which might largely depend upon the speed of undersea and surface movement, could quite likely encounter highly-dangerous mine fields. These mines would be in place to explode approaching platforms, or deny any ability for attackers to conduct offensive operations in vital combat areas.

Enemy mine threats, increasingly becoming both more pervasive and complex, span a large sphere of operational areas to include both shallow-water littoral and deep, or

“blue water” attacks. Should an attacking force come under heavy fire, enemy mines would need to be found -- and destroyed or neutralized -- quickly. Some mines are buried beneath the ocean floor, simply tethered to the bottom or merely suspended in different parts of the water column.

The growing modern mine threat is so significant, that the Navy has been fast-tracking a wide range of new countermine attack and defense strategies. The approach is focused on both littoral mine fields as well as higher-tech deep water mines associated with threats posed by great powers as well, according to senior service leaders.

“We have significant gaps in our capability to defeat 100,000 Russian and Chinese mines which will not be laid in shallow water,” Maj. Gen. David Coffman, Director of Naval Expeditionary Warfare, told an audience in 2019 at the Surface Navy Association Symposium.

All of these dangerous warzone dynamics amount to the simple reason why the Navy and Northrop Grumman are engineering what developers call the “fastest” mine-hunter of all time. Called the AQS-24, the technology merges sonar with laser mine scanning and human command and control to sustain high-resolution countermine sensing and identification at speeds as fast as 18-knots.

“We are working on AQS-24C, which will bring volume search capability and greatly increase the timeline for searching. It will, among other things, provide rapid detection of moored mines,” Capt. Danielle George, Mine Warfare Programs Manager, said in January at the 32nd Surface Navy Association Symposium, Arlington, Va.

George said the Navy plans to deploy the AQS-24C as soon as this year; the AQS-24C, described by George as a Volume Search Sonar, is an upgrade to existing “A” and “B” variants. The first two “C” variants were delivered in 2018 through a Navy deal with Northrop Grumman, George added. The existing “B” system was first fielded with MH-53E squadrons in 2017. AQS- 24B systems have “over 700 hours towed in 2019,” George said.

The AQS -24 system leverages an integrated combination of technologies to include Synthetic Aperture Sonar (SAS) and Laser Side Scanning built into a cylindrical vehicle towed through the water beneath an Unmanned Surface Vehicle (USV). USVs, quickly becoming more autonomous, can be remotely operated by a ship or shore station miles away.

“The AQS-24C is designed to keep the man out of the minefield at speeds up to 18 knots - which means it is the world's fastest mine hunter. This means you can get out there, find mines in the field and get things done quickly, making the mine mission go much better,” Dave Allan, International Business Development Manager, Undersea Systems, Northrop Grumman. “Having an integrated laser for identification brings safety to the fleet. It finds bottom mines, closely tethered mines and some volume mines.”

“Think of it as being able to double the speed you can operate at, because we are pinging at the same rate but we go twice as fast. We figured out how to do that. We still get the benefits of synthetic aperture sonar. We get the benefit of going 18 knots and we maintain the benefit of high resolution. We maintain the same resolution over the full speed range of the vehicle,” Gene Cumm, Director of International Mine Warfare Programs, Northrop Grumman, told Warrior.

Performing this mission, Northrop Grumman developers explain, relies upon sonar and laser scanning technology complementing one another; the sonar scans a wide field of view at longer ranges than the laser, pointing the laser-imaging technology toward a threat or area of interest.

Cumm explained that the success of the system hinges upon two distinct optical windows; one optical window transmits a beam of light on a rotating shaft to emit a laser beam across the bottom, while the other optical window functions as a receiver.

“One of the mirrors has a laser light fired against it. The mirror transmits an image to the sea floor. The second mirror is looking for reflected energy from that laser light, creating an optical image of what is on the bottom,” Cumm said. ​​

Cumm described that the AQS-24 is able to quickly complete four out of five key elements of mine warfare -- detection, localization, classification and identification.

“The fourth aspect, mine ID, is performed by the laser,” Cumm said. The 5th tenet of mine warfare, Cumm added, is mine “neutralization.”

Interestingly, the advantages of laser side scanning underwater were anticipated, if not predicted, in a 2015 essay from the National Institute of Health, called “Optical Sensor and Methods for Underwater 3D.” (US National Library of Medicine, National Institutes of Health. ...Massot-Campos, Oliver-Codina).

The essay seems to foreshadow the AQS-24, stating “regarding the foreseeable future, more research on laser-based structured light and on laser line scanning underwater is needed. These new devices should be able to scan while the sensor is moving….software development and enhanced drivers are required.”

Scanning at high-speeds, described as a way to bring increased value to undersea sensing, is precisely what the AQS-24 is engineered to do. While lasers have been working on the Northrop Grumman undersea sensor system since 2005, the 2015 essay also seems to suggest that improved, modern laser technology can generate images with new levels of precision, clarity and resolution, therefore reducing the effects of obscurants and “scattering” likely to compromise image quality. With these technical challenges in mind, Northrop Grumman has recently updated its laser to address these challenges.

“Another challenge for the future is to develop imaging systems that can eliminate or reduce scattering while imaging. Solutions such as pulse gated cameras and laser emitters are effective, but still expensive,” the essay states.

“In the past when you would find contact on a sonar, you would hand it off to a diver or use a remotely operated camera,” Cumm, told Warrior.

The significance of the mine threat is well articulated in a 2011 Naval War College Review article called “Taking Mines Seriously - Mine Warfare in China’s Near Seas.” Author Scott Truver says “mines are ‘weapons that wait.’ They are the quintessential naval asymmetric threat. Since the end of WWII, mines have seriously damaged or sunk almost four times more Navy ships than all other means of attack combined.”​

Industry and Navy countermine technology developers are all too aware of the toll mine warfare has taken on U.S. forces throughout history. For instance, an interesting 2015 essay from Naval History and Heritage Command, called “Mine Warfare,” recalls a catastrophic mine attack on U.S. forces during the Korean War in the 1950s. The essay specifies an instance in 1950 during the well-known Battle of Inchon amphibious assault.

The essay cites a particularly damaging mine warfare scenario during the assault:

…...On September 26, off North Korea, U.S. destroyer Brush struck an enemy mine that killed 13 sailors, wounded 34 more, and put the ship out of action. Two days later YMS 509 of the ROKN sustained damage from a "floater" on the south coast. The next day Mansfield, spared at Inchon, hit a mine in North Korean waters that sent her to a shipyard in Japan. Then, in one day, October 1, Communist mines destroyed the wooden-hulled U.S. minesweeper Magpie, killing or injuring her entire crew of 33 men, and badly damaged ROKN YMS 504…..(“Mine Warfare,” Naval History and Heritage Command, Edward J. Marolda, 2015).

Decades beyond WWII, mines have claimed U.S. lives and introduced significant levels of combat danger and peril. The Navy’s Frigate, the USS Samuel B. Roberts, was devastated by Iranian-laid mines in 1988 in the Arabian Gulf. An essay on the incident written by Navy History and Heritage Command, explains how USS Samuel B. Roberts crew members battled dangerous, raging fires while the ship was “slowly but inexorably sinking.”

Several years later during the Gulf War, the Navy’s helicopter carrying USS Tripoli was disabled by a mine attack, which exploded at 25-foot hole in the forward starboard section of the ship, according to a 1991 UPI news report. On the same day, a guided missile cruiser, the USS Princeton, was also hit by a mine; the ship’s midsection was cracked and the ship had to cut power by 50-percent due to damage to a propeller.