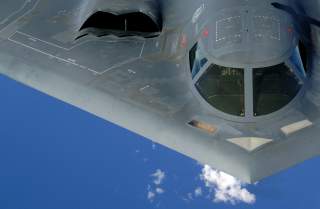 Wilson told the audience he in recent weeks visited Northrop Grumman’s facilities in Melbourne, Florida, where he was “looking at the B-21.” Northrop is “moving out on that pretty fast.” Wilson said, adding he has an app on his phone “counting down the days … and don’t hold me to it, but it’s something like 863 days to first flight.”

“That would put the first flight of the B-21 in December 2021,” Air Force editor John Tirpack noted. “The Air Force has said from the beginning that the first B-21 would be a ‘useable asset’ but has also said it doesn’t expect an initial operating capability with the B-21 before the ‘mid-2020s.’”

The Air Force still is mulling how many B-21s to buy. “We’re exploring the force structure between the B-1, the B-2 and the B-52,” Wilson said.

But Heather Wilson's announcement raises a multi-billion-dollar question. How does the Air Force plan to equip the five new bomber squadrons the service said it needed as part of its September 2018 plan to grow from 312 squadrons to 386?

Since the Air Force announced that plan, it has shuttered one F-22 squadron and redistributed the unit's planes, meaning that in early 2019 the service had just 311 squadrons. It would need to add 75 new units to meet the expansion goal.

Those units could require hundreds of new aircraft costing hundreds of billions of dollars.

The flying branch expected a single new B-21 to cost around $600 million. It could set back U.S. taxpayers $45 billion to equip the extra bomber units with new planes.

For now, the Air Force holds competing positions. One, that an expansion of the bomber force is necessary. And two, that it will maintain an inventory of 175 bombers, just enough for the current force structure. It’s unclear how the service will reconcile the two positions.

So why not just keep B-1s and B-2s flying for longer? As recently as 2016, the Air Force estimated the B-2s could continue operating into the 2060s. The swing-wing B-1s are mechanically unreliable and suffered heavy wear and tear during the air campaigns over Iraq and Afghanistan. The Air Force in 2016 assumed the B-1s would retire in the 2040s.

The Air Force is spending billions of dollars upgrading the B-52s with new engines, electronics and weapons. Similar upgrades, in theory, could extend the useful lives of five squadrons' worth of B-1s and B-2s at lower cost than 75 new B-21s.