America’s Next War Will Be Urban 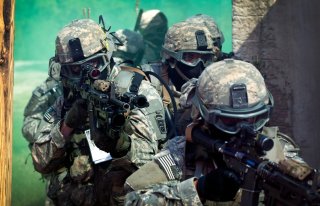 Cities have remained a center of gravity for most conflicts and conventional wars, though they became a focal point in strategic planning only at the beginning of the twenty-first century. The Russo-Ukrainian War has reignited the debate on the future of modern warfare and the trends that continue to point toward its urban nature. Battles raging in the major cities highlight the importance of strategic control. In the context of political optics, there is no better example than the intense battles which occurred in Mosul, Aleppo, and Raqqa between 2011 and 2018 to retain control as part of broader politico-military objectives.

Recently, American military leaders have predicted that the next urban battles will be fought in megacities. Gen. Charles Krulak contended that the foundations of future warfare were not laid by Operation Desert Storm but by U.S. combat missions in Somalia and Russian lessons from the First Chechnyan War. These predictions are based on two factors: the migration from rural to urban areas, and the rise of intra-state conflicts.

By 2050, the overall growth of the world’s population could rise to 2.5 billion people residing in urban areas. The U.S. Army Training and Doctrine Command (TRADOC) recently highlighted the immediate need to identify alternative approaches to urban operations. History continues to remind us that urban warfare is no longer an instrument of war, as close-quarter battles and house-to-house sieges have elevated from tactical alternatives for small unit action to the main offensive as a part of broader strategic planning.

Urban operations are tactical maneuvers (part of an offensive or defensive action within the gambit of strategic planning) involving at least two actors and are carried out with an intent to lay siege to a city to gain access to its infrastructures. Three cases of urban operations conducted between 2016 and 2022—Kyiv, Marawi, and Mosul—are especially notable.

The offensive to take Kyiv used standard Russian doctrine and started with the bombardment of the city following a sabotage attempt from special operations forces (dressed as Ukrainian soldiers). The Ukrainian authorities killed approximately sixty saboteurs in intense battles. After heavy artillery bombardment, Russian armored columns began approaching the city, with the intent to siege it. This advance met a Ukrainian counter-offensive which not only destroyed Russian armor but the resulted in severe Russian casualties, including the tank column commander, and forced them to retreat. The Ukrainian population and military quickly mobilized to defend the city from Russian forces, and the siege was broken.

The siege of Marawi was a five-month-long urban battle that raged in the southern Philippines. The battle occurred between the Philippine armed forces and the Maute and the Salafi Abu Sayyaf groups (ISIS affiliates). The battle witnessed government troops trained in irregular warfare engaging in house-to-house combat, which decimated the main city. With a population of 200,000, the city of Marawi was divided geographically between majority Catholic neighborhoods and Muslim-dominated areas in the south. In Marawi, combat operations were strictly limited to the city center after the fighters retreated there and remained throughout the battle. The ISIS affiliate groups intended to use the conflict for propaganda that would enflame regional and global inter/intra-religious tensions.

The operation began with Iraqi and coalition troops retaking control of areas in Nineveh Governorate surrounding Mosul, and engaged ISIS on three main fronts outside Mosul, clearing one village after another. In addition to the significant loss of both military and civilian lives, Mosul was decimated during the nine-month-long offensive. ISIS never aimed to retain explicit control over the city but sought to inflict serious losses to the Iraqi army and create instability in Baghdad by prolonging the fight. It also tried to propagandize the fight and the harm committed against civilians to bolster recruitment.

Taking the aforementioned case studies into account, it is important to comprehend the true character of urban operations:

First, cities and towns have symbolic importance. This is reflected by the various governments’ decisions to accept infrastructure damages and loss of civilian lives if it meant controlling urban areas. The siege of Kyiv is one such example that highlights how capturing a capital city can strengthen one’s political motivation. However, if such a campaign fails, it provides many opportunities for propaganda, as witnessed during the offensives on Mosul and Marawi where the symbolism was effective for terrorist groups in attracting recruitment.

Second, civilian casualties are vital for propaganda. Civilian casualties were exploited by ISIS in Mosul and Marawi. Nonetheless, civilian populations were used as human shields, scouts, weapon carriers, and drivers, which allowed ISIS fighters to lay improvised explosive devices or reinforce their positions without being targeted by coalition fire.

Third, complex scenarios overruled commanders’ intent. For offensive actions, commanders had to weigh their losses and analyze the use of superior firepower against the expected loss of civilian lives. In Kyiv, Marawi, and Mosul, air strikes and artillery were directed primarily to minimize losses of coalition troops and overcome challenges arising from a lack of close-quarter battle training.

Fourth, urban warfare is unconventional and improvised. Tactical operations constantly evolved throughout the battle. In the case of Ukraine, territorial defense forces employed Molotov cocktails against infantry fighting vehicles and they mounted man-portable air defense systems (MANPADS) on 4x4 vehicles to increase mobility. In the other instances, ISIS equipped vehicles with explosives and altered commercially available drones for kamikaze attacks by lacing them with explosives.

The battles of Mosul, Marawi, and Kyiv have reignited the debate on troop deployments for urban campaigns/offensives. Though U.S.-led coalition forces contributed air and support assets to the campaign, close-quarter offenses were mainly undertaken by Iraqi troops in Mosul. Kyiv became another example where the burden of counter-offensives was undertaken solely by Ukrainian territorial defense forces.

By this, NATO member nations continue to actively revise their capabilities through training simulations dedicated to urban environments. One such initiative is integrating the use of drones with infantry. During urban combat, fire engagement is loosely disciplined and results in a greater expenditure of ordinances in comparison to rural regions. Drones can provide ammunition to a unit pinned under heavy fire. For example, the Ukrainians have used drones to supply ammunition to their units but also employed small hand-held quadcopters for reconnaissance. The U.S. Army is also looking to modernize its mechanized infantry by integrating unmanned small drones with infantry fighting vehicles for intelligence, surveillance, and reconnaissance (ISR) purposes.

Although modern militaries do seem to understand the need for effective, realistic training, not all militaries have the necessary mechanisms to support it. The Israeli army continues to train its units in simulated settings modeled on urban scenarios; the U.S. and the British Army are still in the process of formulating an urban ecosystem-based training platform. Training sites not only help develop tactical skills for urban offenses but aid in mastering the art of close combat without relying heavily on superior firepower.

Nonetheless, democracies will remain skeptical of participating in urban offensives, and the question of whether decisive firepower should be deployed will remain a point of contention between political leaders and military commanders since the latter share the burden of responsibility when casualties occur among either their troops or civilians. This makes urban offensives additionally unique as residents armed with smartphones may potentially record an engagement and live-stream the operation to the world. This changes such offensives from a battle of tactics to one of narratives, especially for political leaders who may face domestic and international opposition to actions that are perceived as disproportionate or excessive. The ongoing Russian invasion of Ukraine offers numerous such one-sided illustrations.

Is NATO Prepared for Urban War?

Russian military operations in Ukraine have turned into a full-blown war, risking its spillover into Eastern Europe. When drawing lessons from the ongoing operations, the outcome of this long war will likely be decided in urban cities such as Kyiv, Kharkiv, Kherson, Chernihiv, or Mariupol—like in most wars fought since the early twentieth century.

NATO cannot forfeit the concept of urban warfare when it considers combined operations. As population centers remain a form of gravity. Judging by our discussions with a senior instructor at the NATO Joint Warfare Centre and with a former instructor at the U.S. Army Infantry School, in Fort Benning, Georgia, it is evident that NATO has taken note of the above context and introduced dedicated training mechanisms for urban operations, including new tactical level training modules and revised techniques for breaching doors/windows and scaling walls. However, the training focuses on evolving tactics and is devoid of operational/strategic-level implications for large-scale urban operations.