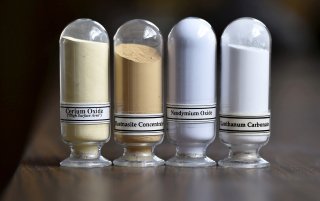 Over the past two decades, China has quietly built a global dominance in the raw materials needed for green energy—and they’re willing to use them to achieve their political ends. By withholding crucial materials, China could threaten parts of America’s energy, transportation, and economic needs. America is in a chess match with China for securing the materials needed for the world’s fastest growing energy source. Avoiding dependence on an adversary for these technologies necessitates making the right moves.

Cobalt, lithium, and a geologically scattered group of materials called “rare earth elements” are necessary to create wind turbines, solar panels, and electricity-storing batteries needed for electric vehicles and power grid storage. While China and America both have rare earth element reserves (though China has significantly more), both countries must look abroad to secure cobalt and lithium resources—and, in this, China is winning.

While still a small amount of overall energy supply, green energy is the world’s fastest-growing energy source, shifting investment patterns away from traditional energy sources. Moreover, the Biden administration plans to make rapid investments to “irreversibly” lead America down a path to green energy reliance. If that’s the case, then changes have to be made so we’re not irreversibly dependent on China for our energy.

They’ll have to be made fast because Chinese companies, backed by their government, are making a major power grab for those most crucial materials. By acquiring foreign mines, securing voting shares in natural resource companies, and buying long-term contracts abroad, China is trading capital for influence. For example, two-thirds of the world’s cobalt production, which is necessary for batteries, comes from the Congo—but Chinese companies control half of it. Taking cobalt processing into account, over 80 percent of cobalt chemicals needed for batteries flow through China.

China’s going after lithium, too. Nearly all of the world’s lithium, critical for batteries and electric vehicles, is in three countries: Chile, Argentina, and Australia. Yet government-supported Chinese companies now control or influence 59 percent of the world’s lithium production, including controlling three-quarters of Australia’s lithium reserves. We must pay attention to how many private Chinese companies are using government-backed investments to infiltrate market economies.

Within China’s borders are roughly one-third of the world’s reserves of rare earth elements, as well as many digital technologies common in modern life. Since 2000, China has produced a whopping 80 percent of the world’s supply.

In a show of their tight grip, China temporarily cut off rare earth exports to Japan in 2010 over a political dispute and imposed export quotas several times, shaking the confidence of governments and manufacturers. Flexing its trade war muscles, China even raised the specter of cutting off rare earth exports to America as recently as last year before pulling back to save face internationally. Dominating these materials has been China’s plan since 1990. They’re not afraid to wield them as political weapons.

With a President Joe Biden, this Chinese dominance could become a problem for America. Biden has big plans for a carbon-free power sector within fifteen years, which will require significant increases in green energy. But right now, America imports 100 percent of over 20 key minerals needed for green energy technology and is almost as reliant on imports for rare earth minerals. In fact, the only rare earths mine in America ships its materials to China for processing. And American trade disputes with China have been no secret over the past few years, which is a trend the Biden administration appears poised to continue.

Even so, we need China for our green energy.

We can reduce this dependence. Indeed, there are things we can do to prevent China from keeping its stranglehold over our energy source. America can start by increasing mining of more necessary minerals at home, specifically rare earth minerals. And we’ve got plenty. Under one-third of American lands are adequately mapped for mining and exploration, but increased mapping can encourage more domestic mining, too. Evidence from Canada and Australia—two environmentally-conscious allies active in heavy mining—indicates that each $1 of government investment in mapping draws out $5 of private investments.

Why aren’t we doing that already?

Shortening the amount of time it takes to open a mine in America would also help. At the moment, it takes five times as long to open one here as it does in Canada and Australia—countries that are also environmentally conscious and responsible miners. The good news is that the Biden administration’s energy plan already shows interest in cutting red tape for other aspects of the energy sector. They should consider cutting some red tape here as well.

Moreover, only one percent of these minerals are recycled for reuse. Better recycling practices for these minerals can put them back on the market at competitive prices.

Due to brute geographical facts of where these resources lie, America will also need an international approach. Inking trade agreements with friendly countries to strengthen flows of and investment in new sources of crucial green energy minerals is a must. Partnerships with countries also targeted by China for their natural resources should also be pursued. President-elect Biden’s self-professed skills for forging international partnerships should be put to use.

America is looking to dramatically increase its green energy usage in coming years. These technologies depend on specific minerals and metals, the mining and processing of which are largely controlled by China. In order to avoid relying on an adversary for crucial resources, America must start making the right moves, both at home and abroad. The natural resource chess match with China has already begun. After all, energy is vital to all aspects of modern life, so the stakes are, to say the least, quite high.