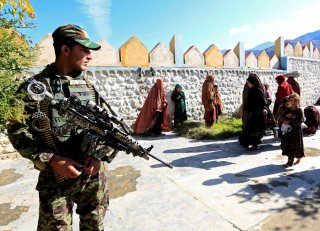 The horrific attack against a girls’ school in Kabul on Saturday, May 8 once again made us stare at the horror which is terrorism. But despite the carnage, the United States has an unfortunate habit of declaring victory and prematurely leaving conflict zones. President Donald Trump withdrew American forces from Syria after pronouncing the Islamic Caliphate defeated. Having concluded that Afghanistan no longer poses a threat to the U.S. homeland, President Joe Biden has ordered our troops to return home by September 11. Before that, the United States abandoned its allies in Afghanistan in 1992, precipitating the civil war and the Taliban takeover in 1996.

These decisions are understandable. America and its allies have grown weary of their nations’ “forever wars” in far-off lands that cost so much in blood and treasure yet fail to produce conclusive results. (France as well is reducing its force presence in the Sahel, after years of slogging it out with terrorists from Mali to Burkina Faso.)

Unfortunately for us, withdrawal does not bring security. While it may protect our armed forces from attack and spare us the expense of military involvement in protracted civil conflict, the threat from violent extremism will not disappear. Instead, it will inevitably come home to roost in subtle, subversive, and dangerous ways. Preparing for this eventuality is a national security imperative that requires decisive, long-range planning by federal and local policymakers.

According to the United Nations, in Syria alone, there are 64,000 foreign fighters and accompanying women and children from fifty-seven countries. Afghanistan hosts more than twenty active terror groups that represent a potent threat to South and Central Asia’s stability. Until now, the world’s leading democracies have preferred to kick this can of worms down the road. Of the estimated 2,000 foreign fighters and family members from France, only thirty-five—all children—have been repatriated. Twenty-two of 1,200 Germans have returned home. As one German member of parliament ominously warned, “At one point or another, these people will eventually escape, or they will be released. They have not undergone any deradicalization programs. They are free-floating. We don’t know how they are or where they are. From a security perspective, doing nothing is the worst of all options.”

While the numbers for the United States are much lower, the alarm bells are nevertheless ringing. According to a study by the Counter Extremism Project, the United States has prosecuted more than 400 jihadist terrorists. Between 2018 and 2024, sixty-one of these convicts—a quarter of those currently incarcerated—will complete their sentences and re-enter society. With recidivism rates of between 44 percent for federal prisoners and 20 percent for Guantanamo detainees, we clearly have not seen the end of jihadi-inspired domestic violence.

Added to this is the more recent danger of right-wing extremism, which shares disturbing parallels to ISIS-type recruitment and mobilization. Both exploit online tools to attract and propagandize adherents, and both are adept at fostering social isolation to perpetuate their ideologies.

If America is to get a handle on domestic terrorism—no matter what its source—it will have to implement a comprehensive national rehabilitation and re-entry program for convicted extremists and their family members. Ironically, although American experts have taken the lead in helping other countries rehabilitate terrorists and their families, there currently exists no such nationwide program in the United States.

Kazakhstan is an example of a country that has—with considerable U.S. assistance—pioneered one of the world’s most successful efforts to repatriate and reintegrate these wayward members of society. They include hundreds of Kazakhs from battlefields in Syria and Iraq. An integrated and multi-disciplinary combination of family outreach, education, community support, and social assistance like housing and employment has not only produced genuine rehabilitation but has resulted in no increase in extremist activity or domestic threat levels. U.S. experts have contributed to launching rehabilitation and reintegration programs for returning families.

Earlier this century Kazakhstan repatriated hundreds of thousands of fellow Kazakhs from China, Russia, Central Asia, and other former Soviet republics. The keys to Kazakhstan’s success, which the United States and others should emulate, are political will and discipline. The country’s first president, Nursultan Nazarbayev, and his successor, President Kassym-Jomart Tokayev, made the correct but politically tough calculation that Kazakhstan’s long-term security was better served by taking responsibility for these individuals, as opposed to leaving them on the battlefield or allowing them to return home unsupervised. A whole-of-government approach ensured that social programs worked hand-in-glove with law enforcement.

As one senior U.S. official put it: “If Kazakhstan can do this, the countries with greater means, especially in Western Europe, should definitely be able to do this.” The ideology of violent extremism has taken root both at home and abroad. Just because the American troops are coming home does not mean the threat will go away. To the contrary, it will only evolve in new and unpredictable ways. Unless we recognize that coercive measures alone will not defeat it and take concerted measures to address the social dimensions of the problem, our populations will remain at risk.

Ambassador J. Adam Ereli was the U.S. State Department spokesman and the Principal Deputy Assistant Secretary of State for Education and Cultural Affairs.