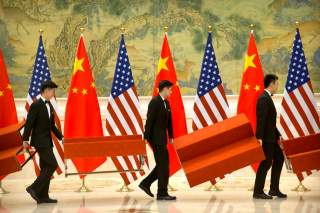 Key point: China has more to lose and Trump is right to finally push back.

a fair game. If all sides start in balance, the rules are the same for everyone, and no player has coercive power over any other, the winning strategy is for everyone to cooperate. Economics 101.

But if one country starts with a massive trade deficit, the existing rules are written to favor its opponents. And when the country with the trade deficit just happens to be the most powerful country in the world, it's safe to say that there are multiple paths to victory.

Despite being widely ridiculed in the press, the homespun wisdom encapsulated in President Donald Trump's April 4 tweet that “When you’re already $500 Billion DOWN, you can’t lose!” is essentially correct. The only thing incorrect was the figure. The U.S. trade deficit was $568 billion in 2017, and that figure incorporates America's trade surplus in services. America's trade deficit in goods alone was a whopping $811 billion.

The headlines on April 4 blamed Trump for a 350-point intraday fall in the Dow Jones Industrial Average. They neglected to credit Trump's for the fact that by the close of trading the Dow was up 610 points on the day. In fact, over the three months of Trump's “trade war” to date, the Dow has been essentially flat (up 170 points).

Nor is market volatility particularly high. It's now back at 2015–2016 levels, after a particularly calm 2017. That's right: Trump's first year in office war marked by historically low stock market volatility. All in all, the Dow has risen more than 30 percent since Election Day, 2018. Ah, the perils of using the market as a guide to politics.

Trump is right to push on trade. A simple return to anything resembling a balanced international trading system would result in massive gains for the United States. What presidential advisors Peter Navarro and Wilbur Ross call the deficit drag depresses the American economy by about 3 percent overall. That is to say, if international trade were balanced, the American economy would be 3 percent larger than it is now.

To be fair, there are lots of reasons why countries run trade deficits, and not all of them are bad. For example, the fact that foreigners want to invest in the dynamic U.S. economy pulls money in, which ultimately has to go somewhere. But it's wrong to say that a trade deficit doesn't matter at all. It all depends on the context.

The United States has consistently run a trade deficit since 1976. The worst deficit of all time was in 2006, when it hit $762 billion. That was 5.5 percent of GDP, nearly double the 2.85 percent deficit recorded in 2017. The trade deficit shrank sharply during the Global Financial Crisis (GFC) as consumers cut back, an “improvement” that was not at all a sign of strength. But the dramatic rise in the deficit between 2001 and 2006 didn't do the economy any favors, either.

When trade flows change due to economic shocks, as in 2008–2009, the direction of causality is clear: the GFC caused a reduction in the U.S. trade deficit, and you can't give the government any credit for that. But sometimes trade flows are changed as a direct result of government policy, and when that happens the government really is pulling the strings.

China's entry into the WTO in 2001 was one such policy intervention that dramatically revised the rules of the international trading game. Like the creation of NAFTA (1994) and the WTO (1995), it was an active intervention in the economy that drove up the U.S. trade deficit. As a result, economic growth that would have happened in the United States under the old rules went instead to China.

In much the same way, if the Trump administration actively intervenes to tilt international trading rules back in America's favor, that will boost U.S. economic growth—at the expense of its trading partners. That's hard luck for Canada, Mexico, the European Union and (most of all) China. Depending on your point of view, it may not be right or fair. But that's the fact.

Put under pressure by the Trump administration, America's trading partners are bound to squeal, and sure to mobilize Trump’s unpopularity against him. Truth be told, global trading rules are so complicated that it's virtually impossible to tell how level the playing field is, or which way it's tilted. But one thing seems certain: with a $568 billion trade deficit, the U.S. is not the overall beneficiary of the current rules.

The European Union and China have threatened the United States with tit-for-tat tariffs on iconic American products like Kentucky bourbon, Harley-Davidson and even fresh Maine lobsters. That may generate news headlines, but the simple fact is that Trump's potential tariff list is $151 billion longer than Angela Merkel's and $376 billion longer than Xi Jinping's. Europe and China can't win a trade war, and they know it.

If Trump is smart, he won't use his bargaining leverage just to sell more bourbon and lobster, popular as that might be in Kentucky and Maine. He'll use it to safeguard and expand America's technological lead. Amidst all the talk of American decline, people seem to forget just how much the U.S. leads Europe and Asia in high technology. That's the real foundation of America's future prosperity.

The Trump administration has repeatedly used the authority of the Committee on Foreign Investment in the United States (CFIUS) to block direct Chinese purchases of American technology—and rightly so. In the brewing trade war with China, the administration could go further to rein in illegal Chinese practices like forced technology transfer and outright technology theft.

American foreign policy has long been dominated by people who seemed to care more about being admired for their good works than about getting the best deal for the American people. That yearning for external validation has clearly been thrown to the wind. But being tough on trade is not enough by itself.

To win a trade war, the Trump team also has to play smart. Given all the weapons in at their disposal and all the advantages on their side, they should be able to win a trade war without a fight, the way Reagan beat the Soviet Union without firing a shot. With Europe in political turmoil and China on the verge of economic meltdown, a burst of presidential bluster might be all it takes for America to win on trade.

Salvatore Babones is an American sociologist and professor at the University of Sydney, Australia. He focuses on China, the global economy, quantitative methodology and the long-term impact of technology. He has written extensively and is the author of The New Authoritarianism: Trump, Populism, and the Tyranny of Experts. This first appeared in July 2018.