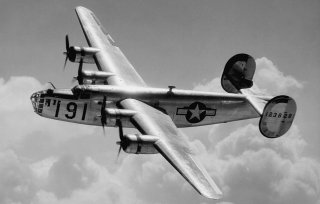 Key point: Victory was ultimately measured by the determination, fighting spirit, and sacrifice demonstrated by thousands of Allied airmen.

Cut off in mid-transmission, this contact report came from a U.S. Navy patrol bomber operating over the Atlantic Ocean some 95 miles north of Cape Peñas, Spain, at 0316 hours on November 12, 1943. Repeated attempts to restore radio communications with the Consolidated PB4Y-1 Liberator, nicknamed Calvert n’ Coke, all went unanswered. Controllers finally listed the aircraft as overdue—presumed missing.

When Air Sea Rescue planes reached the Liberator’s last reported position, no evidence of the bomber or its 10-man crew could be spotted. Searchers did discover two fresh oil slicks—one large and one small—five miles apart. A fight to the death had occurred there, but it would take years for investigators to learn the truth about this fateful nighttime encounter.

The mysterious disappearance of Calvert n’ Coke marked just one incident in the three-year Bay Offensive, fought between Allied antisubmarine forces and the U-boats of Admiral Karl Dönitz’ Kriegsmarine during World War II. From June 1941 until August 1944, thousands of airmen and sailors patrolled the Bay of Biscay, an Atlantic gulf along the coast of France and Spain. Most of these sub hunters wore British Commonwealth uniforms, but several groups of American aviators also played an important role in this campaign.

Ugly interservice rivalries, however, almost grounded the effort before it began. Senior officers in the U.S. Navy and Army Air Forces, deeply suspicious of each other and at odds over even the most minor matters of doctrine and tactics, seriously undermined the nation’s antisubmarine effort. Hard-pressed British commanders stood by helplessly while their American counterparts quarreled and postured. In the meantime, long-range strike aircraft pledged by President Franklin D. Roosevelt to join the Bay Patrol instead sat parked on U.S. runways.

The Bay of Biscay: “the Trunk of the Atlantic U-Boat Menace”

Following the fall of France in 1940, German submarine forces started operating from bases along the Biscayan coast. As the war intensified, upward of 100 U-boats sailed to and from massive concrete-roofed pens at Brest, Lorient, St. Nazaire, La Pallice, and Bordeaux every month. These undersea predators proved extraordinarily difficult to defeat and by 1941 were sinking a large percentage of the war matériel, fuel, and food that Great Britain needed to stay in the war.

Something had to be done about Germany’s U-boats, and soon. Air Chief Marshal Sir Philip Joubert, in charge of the Royal Air Force (RAF) Coastal Command, put his Operational Research Section (ORS) to work on the problem. The ORS consisted of British scientists and mathematicians charged with advising operational commanders on technological solutions. Already, ORS’s out-of-the-box thinkers could claim credit for developing a reliable magnetic detonator fitted to aerial depth charges and a more effective camouflage pattern for low-flying patrol aircraft. Their work on increasing the lethality of air-delivered antisubmarine munitions through improved explosive filler and shallower detonation settings had, by the middle of 1941, begun to pay dividends in angry North Atlantic waters.

Noting that a large percentage of U-boats transited the 300- by 120-mile Bay of Biscay en route to or returning from their patrol areas, Coastal Command analysts recommended launching an air campaign to catch them as they moved across this narrow sea corridor. Enemy submarines surfaced often to charge their batteries; it was while on top that these U-boats were most vulnerable to attack.

The Bay of Biscay, then, was where Allied airmen would most likely find a regular concentration of German submarines. Air Marshall Sir John Slessor, who replaced Joubert as air commander of Coastal Command in February 1943, described it as “the trunk of the Atlantic U-boat menace, the roots being in the Biscay ports and the branches spreading far and wide to the North Atlantic convoys, to the Caribbean, to the eastern seaboard of North America, and to the sea lanes where the faster merchant ships sail without escort.”

Finding the Right Aircraft For the Mission

Coastal Command’s No. 19 Group, flying from bases along England’s southwestern tip, took on the task of chipping away at that trunk. First, they needed proper tools for the job. Due to the distances involved (Cape Finisterre on the bay’s southernmost point measured 800 air miles from British airfields in Cornwall), long-range aircraft were essential. Patrol planes also needed to carry an adequate payload of 250-pound depth charges and fly fast enough to catch a surfaced U-boat before it could dive.

Flying boats like the Short Sunderland and American-designed Consolidated PBY Catalina possessed the necessary range, but their bulk and poor maneuverability limited these patrol planes’ utility against fast-diving U-boats. Coastal Command employed both types throughout the war with some success; however, another bomber then coming off U.S. assembly lines seemed a perfect fit for No. 19 Group’s Bay Offensive.

This aircraft was the Consolidated B-24 Liberator. Designed as a high-altitude strategic bomber, the Liberator’s impressive range, speed, and ordnance-carrying capacity also distinguished it as an ideal antisubmarine weapons system. In 1941 it represented the cutting edge of warplane technology; consequently, air chiefs everywhere wanted the Liberator for their own missions or theater of operations.

General Henry “Hap” Arnold, commanding the U.S. Army Air Forces (USAAF), was the man responsible for allocating land-based aircraft production. Arnold had an unenviable position—until American industry fully mobilized for the war there were never enough Liberators being built to satisfy global demand for these versatile bombers. And behind his amiable public façade, Hap Arnold kept a secret agenda regarding the Liberator.

For years, Arnold had been seeking to form an air force independent from the U.S. Army. The approaching conflict presented him with a unique opportunity to demonstrate how such a strategic bomber command could destroy the enemy’s industrial means to fight, thus decisively affecting the war’s outcome. To accomplish this mission Hap Arnold needed bombers, and plenty of them.

The first few Liberators sent to Great Britain through Lend-Lease went immediately to RAF Bomber Command. Only in late 1941 did Coastal Command receive a small allotment, which it immediately modified into very long-range (VLR) patrol aircraft. By this time U-boats were wreaking havoc on Allied merchant shipping, especially within a region called the Mid-Atlantic Air Gap, an area unreachable by land-based planes. One 12-plane squadron of VLR Liberators, each boasting a remarkable 1,150-mile patrol radius, soon began covering that gap.

But it soon became clear to the British that Hap Arnold was not about to offer up large numbers of Liberator aircraft despite an urgent need for them over the Eastern Atlantic. After the United States entered World War II, Arnold saw as his priority the need to build up the American strategic bomber force. Other users, such as the RAF and U.S. Navy, would have to wait until Liberator production capacity grew to meet their demands.

The trickle of Consolidated Liberators flowing into Great Britain was paralleled by an exchange of British technological innovation with their American allies. One such device that greatly affected future operations in the Bay of Biscay was Air-Surface-Vessel (ASV) radar. In 1940, scientists at Oxford’s Clarendon Laboratories invented a microwave radio transmitter far superior to the long wave radar set then in use by British patrol planes and warships. Their “cavity magnetron” produced a 9.7 centimeter radio wave—a focused, high-resolution beam that, when mounted on an aircraft, proved highly effective at detecting surfaced submarines. As British manufacturers then lacked the capacity to mass produce this microwave radar, Prime Minister Winston Churchill agreed to share the technology with American engineers.

Called the Mark III by the British and the SCR-517 by American aviators, this new radar went into large-scale production by mid-1942. It came as a nasty surprise to the U-boat fleet as German warning receivers, calibrated for long-wave radar, could not detect its emissions. It took the Kriegsmarine two years and dozens of submarines lost before it fielded an effective countermeasure.

The Allies shared other sub-hunting innovations as well. The British Leigh Light, named for its inventor, a Coastal Command squadron leader, enabled Allied patrol planes to illuminate and attack U-boats at night. American-made radio altimeters proved crucial for maintaining a safe altitude over water during conditions of low visibility. Long-range navigation aids produced by both Allies assisted aircrews in accurately plotting their position over the vast Atlantic Ocean.