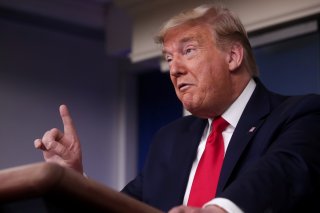 The stimulus package currently being negotiated in Congress to alleviate the economic impact of the Coronavirus crisis tops two trillion dollars, which would make it the largest federal emergency funding package in American history. It offers a one-time direct payment topping off at $1,200 for those making under $75,000 thousand dollars, provides much-needed $130 billion relief to hospitals and $150 billion to beleaguered state and local governments, establishes $367 billion in small business loans for employers to meet payroll, puts aside $500 billion as credit for struggling industries deemed vital to national security such as aviation (with its distribution overseen by an inspector general), and significantly expands unemployment benefits (namely covering wages for furloughed workers for up to four months and including self-employed and independent contractors not covered previously).

The stimulus is certainly a step in the right direction. However, as the bill stands now, it does not come close to addressing or even substantially mitigating the severe economic shocks that lie ahead. Forget the Great Recession; if we are not prepared, this could get much worse than the Great Depression.

Great Depression II, or the Corona Depression, is not a regular economic downturn instigated by a demand shortage, but an extraordinary event where a public health crisis is forcing a demand freeze. It is, therefore, an entirely different beast from the usual recessions that are part of the regular cycles of capitalism. It requires truly extraordinary measures, not a typical stimulus package that follows the conventional business-as-usual blueprint.

With the stay-at-home directives expanding to more and more states covering forty percent of Americans at the time of this writing, we have essentially shut down the American economy. And despite President Donald Trump signaling that he would restart America’s economic engine by Easter, this remains highly unlikely in practice given the visceral nature of the crisis and the accompanied psychology of panic that continues to devastate market confidence absent a “cure.” The economic hiatus could last a minimum of three months. And while experts tell us this is necessary to flatten the curve of the infection’s spread and prevent a pandemonium at hospitals, we have got to be mindful that the problem of exponentiality applies equally to our economic situation as it does to the public health crisis. The president’s gut feeling of apprehension is the right one. If our politicians do not wake up and soon, the result could be catastrophic to America and her future.

Despite America’s growing GDP, the economic wellbeing of the average American has suffered greatly through the years with 40 percent of American adults unable to cover an unexpected expense over $400. The U.S. economy relies heavily on consumption and individual domestic spending. In turn, many Americans literally live paycheck to paycheck managing a tight budget that does not leave much room for liquid savings. In fact, over the past century, America has seen a dramatic rise in corporate savings accompanied by a sharp drop in personal savings. According to the Bureau of Economic Analysis, Americans today save just under eight percent of their income, while corporate savings stand at half a trillion dollars. In contrast, the individual savings rate at the time of the Stock Market Crash in 1929 that spawned the Great Depression exceeded eighteen percent.

On the supply side, small businesses which comprise 99 percent of America’s 28.7 million firms and 44 percent of U.S. economic activity (via GDP) will be most severely affected by the crisis. According to J.P. Morgan Chase, 88 percent of U.S. small businesses are small firms with less than twenty employees and 80 percent are non-employer individual-owned enterprises—to extrapolate, that is roughly 70 million Americans, who are also the most avid consumers and hence the lifeblood of U.S. economy, taking a bludgeoning. Already with less than two weeks into the shutdown, a record number of three and a half million people have filed for unemployment.

Given the circumstances, the funding package in question remains too small, too bureaucratic, and too establishment relative to the gravity of the calamity on the horizon. Estimates are that the U.S. economy could contract by some 25 to 35 percent by the end of the second quarter. We could see an unemployment rate at historic levels, exceeding the 30 percent mark. To say this is unprecedented is an understatement; the crisis could spell a socio-economic collapse with devastative cultural ramifications the likes of which no person living today has witnessed. Note that at the height of the Great Depression, only close to a quarter of Americans found themselves without work, and that meant long lines at soup kitchens, poverty, and hunger. A grim picture begins to emerge: that of millions of our fellow Americans struggling to survive. If the Wuhan virus were the seismic event, its economic tsunami is quickly reaching our shores. We need to do all we can to prepare for it and fast—if our Titanic of an economy sinks, we will all drown, rich and poor together.

What is necessary is for the government to establish a temporary Universal Basic Income with direct monthly payments of $2,500 minimum to every American adult for the duration of the presidential national emergency order, a six-month moratorium on all rent and mortgages and all outstanding debt including credit card payments, student loans and related interest. At least $500 billion in emergency relief should be allocated to states worst affected by the contagion, with the fund supervised and distributed by the Treasury in consultation with the Coronavirus Task Force. Congress should also triple the size of its small business loan proposal and introduce various debt forgiveness programs for firms freezing layoffs. The total cost of what is actually required for a comprehensive response would, therefore, be more than three times the current package, roughly equal to the amount the U.S. economy is expected to shrink without the emergency funding. Such measures would also go a long way toward giving people a sense of security and certainty, ensuring market stability in the long run and keeping people on payroll through the crisis. In other words, flattening the curve of expected unemployment and exponential economic loss should receive at least as serious attention as that of the contagion.

We could aid the industries most affected by COVID-19 to help them stay afloat during the crisis with government-backed loans and grants but must place loophole-free stipulations to ensure the money actually goes to cover payroll—strictly banning stock buybacks, executive compensations, and dividends. The largesse of the American taxpayer to these companies cannot be unconditional or go unchecked. Corporations that request access to government-backed loans must be legally required, not merely advised, to restrict layoffs. Our lawmakers must ensure the emergency package does not become yet another instance of corporate welfare prioritizing profits over the national interest—a plausible scenario given the control K Street lobbyists exercise over the text of the act itself and the mayhemic urgency of the process absconding proper oversight. At this crucial time, we cannot afford further public distrust and resentment toward America’s big business. The business community would not want that. We would do well then to adopt a “trust but verify” approach to our corporations.

If we have learned anything from the Coronavirus emergency, it is that self-sufficiency in medical production and creating a secure independent national supply chain for critical goods (including lifesaving drugs and medical equipment) are both a public health and a national security imperative. The Wuhan Coronavirus is an opportunity to help put us on the path toward a more national economic policy that puts the country first, and to ensure we have access to secure supply chains for essential goods. Economic patriots and populists from the Left and Right should not give in to the corporate lobbyists who fight tooth and nail for a bailout of their respective industries but blackball the necessary new supply chain provisions. The time for business as usual in Washington is well and truly over.

A Moment for Reckoning

Every American generation has its defining crisis and comes to be remembered in light of its response to it. The Lost Generation, already disoriented from the Great War and the frenzy of modernity, failed in confronting the Great Crash of 1929, ushering in the Great Depression in which it was forever lost. The G.I. Generation accepted the challenge of WWII head-on to become known as the Greatest Generation. We should use history as our guide. There already exists a profound generational gap between millennials and the boomers. Our polarized politics is only a reflection of this divide. Inept handling of the Corona Crisis by the boomer generation elite would only aggravate the rift between the young and the old and tear at the seams of our already distressed social fabric.

It is about time we learn that national interest supersedes corporate profits. That despite their fleeting and superficial boons, reflexive untethered globalization and unrestrained movement of peoples are recipes for disaster in the long run. Moments of national crisis are opportunities to renew our bonds with each other as compatriots and strengthen our solidarity as a nation. We should hold both Republican and Democrat lawmakers accountable for the decisions made today and take them to task for the corporatist globalist stances which disregard the plight of the American citizen and put the future of our country at risk.