America Ignores Africa to Its Peril 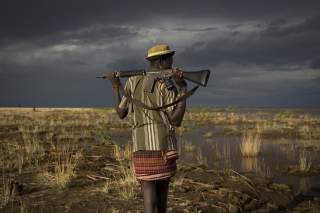 While Europe is reeling politically and fracturing from the challenges caused by failing states and terrorism in Africa, America is pivoting away.

The continuing deprioritization of Africa by the current administration is a mistake. Africa is critical to U.S. national security. It is a battleground for many of the issues that will shape America’s position in the world. These issues include the expansion of the global Salafi-jihadi movement, the rise of China, the reemergence of Russia, and the weakening of Europe.

Congress should lead the way and authorize the Trans-Sahara Counterterrorism Partnership, a bipartisan program that requires a comprehensive strategy and a holistic inter-agency approach to address violent extremism in Africa.

Africa’s importance on the world stage will skyrocket in the coming decades. The continent is home to 1.2 billion people and will double that size by 2050. It has nearly as much landmass as the surface of the moon, is rich with natural resources, and has the potential for massive economic growth.

Unfortunately, Africa’s growth is a liability as well as an opportunity. Instability and poor governance in Africa are spawning problems that reach across continents and will only get worse. Population growth under current conditions will lead to more migration, which is fraying Europe’s political fabric to the benefit of adversaries like Russia. African smuggling networks move drugs, people, and weapons between the Americas, Europe, and the Middle East. This illicit trade—including human trafficking and slavery—fuels organized crime and terrorist organizations. The number of terrorist attacks in Africa has risen rapidly in the past five years, and groups linked to al Qaeda and ISIS are now expanding to new areas on the continent, buoyed by persistent conflicts and governance vacuums.

The world is not prepared for the challenges that Africa brings. A coming youth bulge—ten to twelve million new workers each year—will strain African governments already struggling to create economic opportunities. Among the weak or failing African states are Somalia, Libya, and Mali—all facing political crises, armed conflict, and terrorist havens. Large countries that form the bedrock of Africa's stability are also at risk. Nigeria, Algeria, Kenya, and Ethiopia, together home to nearly four hundred million people, are facing recent or impending leadership transitions, domestic insurgencies, unrest, economic setbacks, and failing states on their borders.

Historically, U.S. policy has mostly treated Africa as a receptacle for development aid and a tertiary theater for counterterrorism efforts, behind the Middle East and South Asia. The Trump administration's lack of interest in the continent though has increased confusion over America’s role in Africa. Since the deaths of four American servicemen in Niger in October 2017, the U.S. military presence in Africa has been questioned anew by the public and American officials. The administration’s reprioritization from counterterrorism to great power competition has left Africa—still viewed mainly through a counterterrorism lens—without a coherent strategy. Today, the Pentagon is conducting a “sweeping” review of American Special Operations Forces (SOF) in Africa in response to pressure to reduce risk and cut costs. The administration’s efforts to slash governance building and development efforts on the continent have been prevented so far by Congress, but the initiatives remain at risk.

At the same time, U.S. adversaries recognize the strategic and economic opportunities of Africa and are taking advantage of America’s disengagement. Russia and China have both established military positions on the continent to challenge U.S. interests. China has already used its new base in Djibouti to disrupt U.S. air operations. Russia has intensified its efforts to gain allies across North Africa and displace Western influence in central Africa. It is taking steps to establish a military presence in Egypt to overlook the Mediterranean and the Suez Canal. This effort puts Russia—and its partner Iran—on track to threaten the free flow of goods through three global maritime chokepoints: the Suez Canal, the Bab al Mandab Strait, and the Straits of Hormuz. Russia and China also seek to supplant America with soft power. For example, China’s aggressive investment in Africa is well documented. Russia has also pursued economic deals with numerous African states, in multiple sectors, including banking and energy.

ISIS and Al Qaeda are also pivoting to Africa. Both groups are part of the Salafi-jihadi movement, which is spreading and strengthening in Africa. This movement may even be more likely to succeed in Africa than in the Middle East or South Asia because Salafi-jihadi groups thrive in conditions of poor governance, which is the norm across Africa and will worsen if current trends continue. Marginalized, aggrieved, and vulnerable populations are easily exploited by Salafi-jihadi groups that offer justice and protection. Incompetent and brutal militaries only worsen popular grievances and fuel recruitment. While jihadists based in Africa have not yet generated a direct threat to the U.S. homeland, they have facilitated attacks in Europe and progressed toward capabilities that will allow them to attack further. Furthermore, Africa is closer to America and Europe than other regions with Salafi-jihadi havens. The smuggling routes that cross the continent can move terrorists as easily as cigarettes.

Reactively withdrawing U.S. troops from Africa is a mistake. The administration should instead invest in bettering governance and security conditions in Africa. Moreover, Washington should use the Pentagon's ongoing review of the Special Operations Forces posture in Africa as an opportunity to define clearly America's military objectives there. The United States must ultimately think beyond counterterrorism and become a participant in Africa's future prosperity, not a bystander to Africa's exploitation by enemies and rivals.

Image: An armed Turkana man walks towards the shores of Lake Turkana near a temporary fishing camp some kilometres from Todonyang near the Kenya-Ethiopia border in northwestern Kenya October 12, 2013. The Turkana are traditionally nomadic pastoralists, but they have seen the pasture that they need to feed their herds suffer from recurring droughts and many have turned to fishing. However, Lake Turkana is overfished, and scarcity of food and pastureland is fuelling long-standing conflict with Ethiopian indigenous Dhaasanac, who have seen grazing grounds squeezed by large-scale government agricultural schemes in southern Ethiopia. The Dhaasanac now venture ever deeper into Kenyan territory in search of fish and grass, clashing with neighbours. Fighting between the communities has a long history, but the conflict has become ever more fatal as automatic weapons from other regional conflicts seep into the area. While the Turkana region is short of basics like grass and ground-water, it contains other resources including oil reserves and massive, newly discovered underground aquifers. Picture taken October 12, 2013. REUTERS/Siegfried Modola