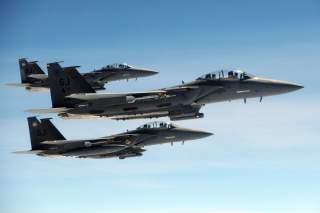 Given these pressing concerns, and many others, there is clearly an unambiguous and pressing need to rapidly address a Military Sealift crisis. In addition to upcoming budget planning, there appears to be an immediate need to re-direct or fast-track funding to address the deficit. Many believe the threats are simply far too serious for the US to do otherwise.

As the Pentagon accelerates its pivot toward great power competition and moves beyond 15 years of counterinsurgency, the US military continues to build up forces, increase training and conduct exercises with regional allies in both the European and Pacific theaters.

This is widely known, as NATO and US Army Europe continue to launch visible allied interoperability operations and -- simply put -- continue a substantial buildup of military power. Of course, much of this is intended to send an unambiguous “deterrence” message to Russia.

However, all of this highlights the massive US deficit when it comes to actually “getting there,” -- sending forward deployed forces and sustaining Ready Reserve Forces. US Military Sealift Command is, according to Congressional and Pentagon authorities, operating with insufficient personnel and boats for transport. C-5s, C-17s and other air assets can of course forward position troops, supplies and needed equipment --but how does the Pentagon get enough tanks and heavy armored vehicles to Europe without enough modern transport ships and sealift assets? How does the US counter Chinese incursions in the Pacific and ensure secure transit of vital international waterways? How can land assets such as artillery systems and armored vehicles get to key island locations in the Pacific?

The fleet is not only too small but drastically in need of upgrades and aggressive modernization. Many of the boats use antiquated steam propulsion and, perhaps of greatest significance, the ships simply cannot move the heavy assets needed to meet the great power threat posed by both Russia and China. Roll-on/Roll-off ships need upgrades --- new ones are needed.

For example, in an interview with Defense News last Fall, retired Rear Adm. Mark Buzby told the paper the average age of the fleet is 43 years. Of the 46 ships in his reserve force, about 23 or 24 need urgent attention, Buzby said, according to the article.

Congressional perspectives are aligned with Buzby, echoing serious concern about a US Military Sealift readiness crisis. The 2019 NDAA requires the Navy to submit a business case analysis for getting the Ready Reserve recapitalized.

“In order to procure more than two such vessels, the Secretary would need to certify that the U.S. Navy has initiated an acquisition strategy for the construction of no fewer than 10 new sealift vessels, with the lead ship anticipated to be delivered by not later than 2026,” according to an explanatory statement released by Congress, cited by Defense News.All of this may lead to longer term progress, but what kinds of near-term funding and modernization efforts might be needed to address the readiness crisis “today?” -- given the seriousness of great power threats in both Europe and the Pacific. Part of the needed Military Sealift increase involves a need to recover from a 2012 personnel and equipment efficiency and cost-saving reduction to the force.

A 2012 Military Sealift Command essay cites the effort as streamlining the force to become more agile.  Senior Pentagon officials routinely cite the continued need for more heavy forces in Eastern Europe as substantial. In recent years, the Pentagon has moved at least two heavy Armored Brigade Combat Teams to Europe, along with Stryker brigades and infantry assets. As part of this broad strategic push, the US Army is sending Stryker brigades armed with emerging Short-Range Air Defense technology.  A need for mobile air defenses provides the inspiration for arming Strykers with new weapons. The Cold War mechanized warfare air-defense emphasis atrophied during more than a decade of counterinsurgency.In addition, US Army Europe conducted a visible Dragoon Ride convoy across Europe several years ago, while conducting exercises with Eastern European allies along the way.

There is little doubt that this was deliberately executed as a message to Russia by showing that US Army combat forces could capably transit the European continent if necessary. An essay in West Point’s Modern War Institute makes the point that Russian and former Soviet railroad transport has, for decades, been far more developed than NATO and allied rail transport infrastructure in Western Europe. This phenomenon, it goes without saying, explains why the US would conduct exercises to emphasize its readiness and cross-continent deployability. US Military Sealift is indispensable to this effort.

Furthermore, not only is there a problem when it comes to transporting tanks and other heavy combat assets, US Military Sealift Command is also expressing concern about its ability to fulfill “global patient movement taskings,” according to an MSC news report.“Currently, we can meet global patient movement taskings, but if the demand increases and/or if operating in a contested environment, our ability to perform this critical mission might be impeded. The efforts of the GPMJAB (Global Patient Movement Joint Advisory Board) advance and help ensure the readiness of our global patient movement capability now and in the future,” said U.S. Air Force Col. John Andrus, USTRANSCOM (US Transportation Command) surgeon general.

Another pressing threat circumstance relates to the aggressive Chinese military and commercial shipbuilding enterprise, according to an interesting essay “Towards a New Comprehensive Maritime Strategy,” authored by Vice Adm. A. Brown (ret), President and CEO of NDTA (National Defense Transportation Association) and NDTA’s Military Sealift Committee.   Among other things, the editorial calls for a large-scale strategic reset when it comes to both ensuring vital commercial trade, expanding US Sealift assets and pursuing a broad-based Military Sealift operational uptick.

“China has the largest shipping companies in the world, is the world’s largest shipbuilder, and has the world’s largest port operating companies, resulting in maritime influence that spans the globe. Chinese built ships designed with cutting edge Chinese developed technology operated by Chinese shipping companies call at Chinese operated ports to deliver goods manufactured in a Chinese managed international supply chain throughout the world. That is the Chinese vision- a bold, compelling vision which has no parallel in the US, neither in specificity of desired outcome nor audacity in thinking."

Given these pressing concerns, and many others, there is clearly an unambiguous and pressing need to rapidly address a Military Sealift crisis. In addition to upcoming budget planning, there appears to be an immediate need to re-direct or fast-track funding to address the deficit. Many believe the threats are simply far too serious for the US to do otherwise.