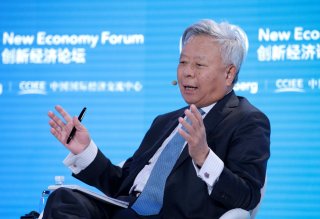 For a young and scrappy institution, the Asian Infrastructure Investment Bank (AIIB) sure gets a lot of attention. With a sliver of the World Bank’s human and capital resources, the AIIB ought to be a minor blip on the radar compared to other international institutions. Yet, the 2021 Aspen Security Forum—a prominent event on the annual calendar for the national security community—dedicated an entire session last Wednesday, August 4, to interviewing Jin Liqun, president of the AIIB. The rising prominence of Jin and the AIIB is less about the bank’s spending power and more about how the AIIB foreshadows China’s positioning as a player dedicated to multilateralism and climate action.

The AIIB is often viewed as a mechanism for China to finance its global infrastructure plan, the Belt and Road Initiative (BRI). But if that were the AIIB’s purpose, the Bank would be of little note given the China Development Bank and the Export-Import Bank of China, both of which pre-date the AIIB and have channeled robust resources into BRI projects. Instead, the AIIB’s primary value to the Chinese government is to promote an image of China as a beacon of multilateralism and allows China to make up for its relatively minor role in international institutions like the International Monetary Fund and World Bank.

That expanded power is evident in the success with which the AIIB has gotten European countries, along with Canada and Australia, to flout U.S. warnings and join the ranks of its one-hundred-plus member countries. With U.S. allies on board, the AIIB signaled to the world that the bank and China are multilateral players, ready to fill the gap left by the United States and (as China argues) its outdated institutions. Building support from a broad coalition of countries was crucial to “convince the rest of the world that this bank works by the same high standards, exactly like that of the World Bank,” Jin described at the Security Forum. The AIIB became a public diplomacy tool to enhance China’s reputation. In the AIIB, China gets a public diplomacy tool to enhance its reputation while also wielding veto power over an ostensibly independent multilateral institution.

Whether the AIIB is actually independent is a question increasingly worth asking, as it seems like the AIIB has made moves that closely foreshadow steps taken by the Chinese government—particularly regarding China’s climate policy.

When the AIIB launched with the slogan “lean, clean, and green,” the notion of “green” meant the bank would promote the economy (think, green for money), a stance in line with China’s policy on climate at the time. But in June 2015, a day before the Chinese government announced a surprising climate action plan leading up to the Paris Agreement, Jin changed the meaning of “green” to eco-friendly. The bank pivoted to promote environmentally friendly technology and green finance as central to its mission.

This was not the only time the bank has indicated China’s climate policies. In his speech at the United Nations General Assembly in September 2020, China’s President Xi Jinping declared China would be carbon neutral by 2060, a lofty goal requiring China to switch from coal for the majority of its power. Only weeks before this speech, Jin announced the AIIB would not invest in coal or related infrastructure. While the AIIB may stress its independence from China, it is difficult to view the close alignment between the bank and China as a mere coincidence.

What other shifts might we expect from the AIIB, and what might they portend for China’s broader sustainability strategy? When asked about modifying the bank’s energy investment policy at the Security Forum, Jin stated it would be updated next year, adding that, “My view is that in a new energy strategy, an updated strategy, coal definitely will be out.” Officially changing the policy to ban coal investments at the AIIB could signal a move for China to disavow coal leading, at least publicly, leading up to the Climate Change Conference in Glasgow this year.

The AIIB is an institution worth watching because it provides a glimpse into the trends taking hold in the Chinese government, whether that means cozying up with U.S. allies or pledging to reduce carbon emissions. For a notoriously opaque governing body, paying attention to the AIIB could offer a better understanding of where the Chinese government is headed in the future.

Calli Obern is a master’s candidate in International Policy at Stanford University, specializing in energy, natural resources, and the environment and a research fellow at Ecospherics, an advisory firm on environmental and national security issues.