America Must Make The Internet Bigger And Better 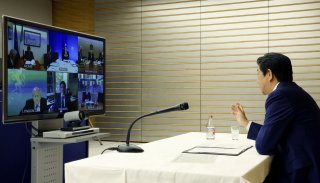 Could any other industry or piece of infrastructure have so gracefully accommodated the surge of volume experienced on the internet in recent months?

New analysis from Kentik shows that video conferencing traffic is up 500 percent since January. Multiparty real-time video conversation is among the most uncompromising types of traffic. It doesn’t tolerate much delay, and it consumes large amounts of bandwidth. This is why it took longer than many of us thought it would to catch on. (Remember AT&T’s video phone from the 1960s?) And yet, in a matter of weeks, we moved much of the economy from face-to-face office meetings to video calls.

Initial estimates from around the world showed immediate total traffic increases of between 10 and 40 percent. Several weeks later, Kentik estimates total US internet traffic this year is up around 50 percent.

In recent weeks and recent years, many sectors of the economy have not displayed this level of adaptation and growth. Overall productivity growth in the “physical economy” has been sluggish. In some sectors, such as healthcare, it’s been abysmal. We can’t go on like this.

In his magisterial call to arms over the weekend, Marc Andreessen urged us — nay, commanded us — “to build.” Skyscrapers, vaccines, apartment buildings, online schools, hyper-automated factories, and much more. In too many sectors of the economy and in too many regions, politics and other inertial phenomena have prevented actual building. In fact, as Andreessen laments, the building ethos has been in short supply, too. We need both more building and more “building.”

Look at the results when we are allowed to build. We built the internet. In the US over the last 25 years, telecom, cable, mobile, software, and web firms invested over $2 trillion in broadband networks and data centers. It is working.

Now we need to make it bigger and better. Even before the immediate crisis, we needed to put more of the economy on the internet. Now this imperative will accelerate.

Consider the virtual reality telemedicine firm XR Health, which just raised $7 million. Until several weeks ago, telemedicine was still stigmatized and discouraged by healthcare payers. Now, suddenly, these remote health services, which have been obvious but underused for two decades, will explode in popularity due to necessity. Ridiculous obstacles across the economy, which we for some reason tolerated, will now be torn down, forgotten, or ignored. And the internet will rush in to deliver better products and services at a fraction of the cost.

The deployment of 5G wireless networks will be at the center of this next phase, although as we’ve learned in recent weeks, we still need wired networks, too. I’ve called this next phase the exanet:

“The Internet was not conceived to be the commercial, social, and industrial platform for the entire planet. (The founders, for example, didn’t think too much about security, and the TCP/IP protocol, while in some ways ingenious, is less than ideal for many modern applications.) The Internet’s unlikely success is a testament to the network firms that figured out how to massively scale an experimental project and to the entrepreneurs who invented so many helpful and bizarre ways to exploit the newfound bandwidth.

If the first several decades of Internet were based on interoperability through digital packet switching and expanded capacity via fiber optics and broadband, the next phase will (in addition to continual capacity additions) focus on ubiquity, latency, reliability, application diversity, and security.

Just as there was a huge leap in user-friendliness and reliability when we switched from dial-up modems to always-on broadband, our new networks will have to make a similar jump to connect billions of objects automatically, seamlessly, and reliably. Do we want to re-enter the Wi-Fi password every time we add a device to the network or get in a car?”

The internet will be not a niche in the economy but the foundation of the economy. Not a network conceived as a science project that we wrangled into a commercial platform, but a high-performance, always-on, adaptable, entrepreneurial, heterogeneous, everywhere exanet. Let’s go build it.