America Must Make Sure It Can Fight and Win a Nuclear War. That's Why the INF Treaty Died. 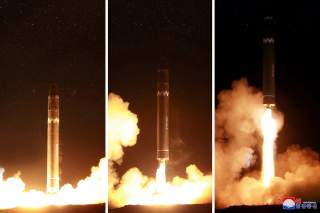 The United States looks set to withdraw from the Intermediate-range Nuclear Forces (INF) Treaty. The treaty, signed in 1987, prohibits the US and Russia from deploying ground-launched ballistic and cruise nuclear missiles with a range of 500 to 5,500 kilometres. The immediate reason for withdrawal is Russia’s alleged breach of its treaty obligations with the deployment of a new ground-launched cruise missile, the 9M729.

The decision by the US, seemingly pushed forward by National Security Advisor John Bolton, has been met with much chagrin, including concerns about reigniting a nuclear arms race and about playing into Russia’s hands. Steven Pifer of Brookings has argued that the international community will lay blame for the death of the treaty at US President Donald Trump’s door. Moreover, the Russians will be free to deploy intermediate-range weapons at will.

Some criticism of the decision is based on the misunderstood notion of strategic stability. Intermediate-range forces were originally banned because their short flight times and close proximity to the enemy were seen as destabilizing factors. To use the language of Thomas C. Schelling, such weapon systems exacerbated the ‘reciprocal fear of surprise attack’. So the INF Treaty, like the Strategic Arms Limitation Talks Agreement before it (1972), was built on the false premise that to prevent war, weapons required legal restraint. Indeed, there’s concern that nuclear weapons could soon be under no legal restraints for the first time since the 1970s.

Arms control has three main objectives: to reduce the likelihood of war, to reduce the cost of preparing for war, and to reduce the amount of destruction caused by war should it occur. When it comes to nuclear weapons, arms control is partially based on the notion that certain weapon systems are destabilizing because they’re perceived as undermining the doctrine of mutually assured destruction (MAD). The argument goes something like this: if a first strike that disarms an adversary is a viable option, the adversary’s retaliatory capability will be threatened and therefore their desire to launch a preemptive strike will be increased.

The problem with that analysis, and with arms control in general, is that it seeks technical solutions for political problems. As argued persuasively by Colin S. Gray, weapons don’t make war. As any Clausewitzian knows, war is a continuation of policy by other means (violence). Thus, the causes of war are to be found in politics, not in the technology of war.

It is certainly true that the acquisition and deployment of weapons can signal political intent, in which case voluntary restraint may be a signal of positive political will and thus may reduce tensions and the possibility of conflict. Nonetheless, the political nature of war and war preparation leaves us with a paradox for arms control. When you really want arms control (when relations are deteriorating), you can’t get it, and when it’s easy, it’s not required.

Reflecting the political nature of military matters, the decline in Cold War–era arms control treaties is simply symptomatic of the deteriorating relationship between America and Russia. In the current climate of nuclear modernisation and proliferation, the US has a choice to make. It can either continue to base its security partially on an arms control regime that is fundamentally flawed, or it can seek to control the arms of its potential foes by modernizing and increasing its own nuclear arsenal. Thankfully, the Trump administration has dropped the mistaken abolitionist idealism of the Obama years, and, as evidenced in the 2018 Nuclear Posture Review (NPR), is seeking to acquire a modern, flexible, resilient and useable nuclear capability.

Such a capability, which must confront a range of foes, should include intermediate-range forces. Nuclear weapons can’t be regarded as mere instruments of minimum deterrence, relying on the long-discredited notion of MAD. The US needs the capability to engage in nuclear warfighting across the entire spectrum of nuclear options. (Warfighting is defined here as ‘engagement with enemy forces to attain military objectives in the pursuit of policy goals’.) A mature posture can’t be built just upon large, intercontinental-range weapons suited for strikes against enemy cities.

A nuclear-warfighting capability is necessary for five main reasons. First, it enhances the credibility of deterrence by providing viable response options across the entire range of threats. Second, it provides strategic options to cope with the failure of deterrence. Third, if deterrence fails, it provides the means for damage-limitation operations against an enemy’s nuclear forces. Fourth, it offers the basis for a comprehensive theory of victory, which must be the foundation for any use of force in the pursuit of policy objectives. And finally, it meets the requirements for a just war by facilitating a reasonable prospect for success, proportionality and discrimination.

The 2018 NPR is a step in the direction of a nuclear-warfighting capability for the US. While it continues to prioritize deterrence, it envisages nuclear operations beyond deterrence and beyond simple retaliatory strikes in support of deterrence. Unfortunately, the NPR doesn’t fully embrace warfighting. Indeed, it explicitly rules out a return to nuclear warfighting and doesn’t put forth a broad theory of victory. That is unfortunate, but perhaps not surprising. The world is only slowly and reluctantly coming to the conclusion that we’re entering a new period of the nuclear age. In preparation for this new age, the Trump administration is correct to withdraw from the INF Treaty.

The best way for the US to avoid war, and to ensure its survival and achieve victory if war occurs, is to have a modern, flexible nuclear capability. Such a capability will hopefully deter any and all foes, but national security cannot be based on the hope of deterrence alone. Should deterrence fail, the US must have the wherewithal to fight, survive and win a nuclear war. The INF Treaty has become an impediment to developing a comprehensive warfighting capability for the new nuclear age. It’s time to move on.

David Lonsdale is a lecturer in war and security studies at the University of Hull in the United Kingdom.

This first appeared in ASPI's the Strategist here.