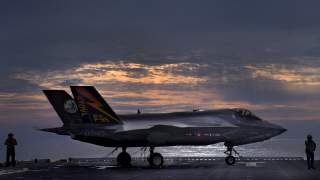 A defining question of the 21st century is whether a third world war between China and the United States is inevitable, or whether these would-be adversaries can find a way to coexist. At this time, the two countries seem to be on a path that leads to kinetic conflict, even as new technologies are changing the character of war and the global security landscape is shifting.

The United States is approaching this new era with a credo of “great power competition,” giving pride of place to military lethality. In truth, the Pentagon has been yearning for a real enemy for some time, the kind that brings order to both grand strategy and a messy world. Even so, the cultural transition from GWOT to Great Power has been swift. It turns out an aircraft carrier actually can turn on a dime, if only metaphorically.

One lagging shift, however, is the concept of “competitive space.” Even as Secretary Mattis points to the importance of the competitive space in global affairs and the primacy of non-military power and international partnerships in shaping that space, the United States is concentrating its investments in legacy weapons and confrontational diplomacy.

In spite of the heady words, in reality this is a time of strategic distraction for America, mired in political divisions at home and regional battles abroad.

China, meanwhile, has been seeking to define the “competitive space” for some time. From information age minerals in Africa to Hollywood’s cultural reach, the Chinese are making strategic investments all over the world.

A signature effort, the Belt and Road Initiative, allegedly means trillions of dollars in “win-win” infrastructure improvements for some 65 countries, from the Port of Gwadar to the Panama Canal. At the same time, China is pouring money into its military and making increasingly aggressive moves in the South China Sea and elsewhere. It’s all built on the shaky foundation of an autocratic and aggressive personality cult, but no one would say the Chinese lack strategic focus.

In this inauspicious moment for great power comity, there may be an opportunity for other countries to play a constructive and catalytic role (Russia, in contrast, seems determined to play a destructive and impunitous role). If public opinion is any indicator, there are three nations with widespread global support: Germany, Canada, and Japan.

There is irony there, of course, given that two of those countries are only one full generation away from being the villains of the last world war. Perhaps Germany and Japan learned lessons in defeat that posture them better today for a different kind of geopolitical leadership, one based more in economic strength, diplomacy, and foreign aid than in offensive military might. Playing to their strengths as security builders rather than war fighters also would position these countries to deal with the security challenges of the latter part of this century, which will not all be military in nature.

Perhaps this is an arc of civility that will help salvage a liberal world order.

In that regard, the United States needs a broader strategy. While a strong and modernized military is an important deterrent and counter to discrete aggression, the United States should have a plan to achieve an end state other than World War III.

If it turns out that WWIII really is inevitable, then the United States will also need more than military ways and means to prevail. Investments in a strong economy and polity are crucial. The industrial base, from natural resources to research and development to good jobs in an automated future, is a core strategic strength, which China clearly recognizes.

Finally, in war or peace, and in all the shades of gray in between, the United States should be looking once again to cooperate with global partners, whether that means building on mutual interests or facing common foes and challenges. Such cooperation requires a positive engagement with the world through development, trade, culture, investment, and political and military alliances and partnerships.

That means a comprehensive strategy not just to win a war, but also to win the peace — even better, to win without fighting.

Sharon E. Burke is a Senior Advisor at New America, where she directs the Phase Zero project. She served in the Office of the Secretary of Defense 1994-2000, on the staff of Policy Planning at the State Department from 2002-2005, and as the Assistant Secretary of Defense for Operational Energy from 2010-2014.