America Needs a Space Force: These 5 Movies Could Help 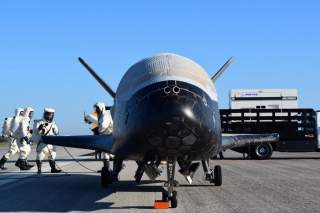 It sure looks like, one way or another, America’s Space Force is going to take-off. The Pentagon plans to have version 1.0 up and running in a few months. And both versions of the annual National Defense Authorization Act—now in conference committee—have language on the Space Force.

There are strong arguments that, done right, the space force would be good for America. At this stage, then, it’s worth thinking about what the character of our new force to look like.

And where better to look for inspiration than Hollywood? Here are five films that ought to inform how America’s military serves on the high frontier.

5. Earth vs. the Flying Saucers (1956). This classic black-and-white science fiction thriller is worth watching just to see the aliens mow down the Washington Monument, the Capital and Union Station. As they cruise over the mall, be sure to note the temporary office buildings from World War II still lining the reflecting pool.

Rather than be subjugated by superior enemy technology, scientists and soldiers develop an asymmetrical technology that takes down the enemy ships and saves the earth. That’s what we’ll need from our new space force—an innovative cadre of men and women who can out-innovate as much as out-muscle our adversaries in outer space.

Here is hoping the space force is an out-of-the-box thinking creative force.

4. Forbidden Planet (1956). Take Sigmund Freud, William Shakespeare and robots on another planet. Stir. Add in background music composed of “electronic tonalities” that was so innovative and otherworldly it was not considered eligible for an Oscar as a soundtrack. Pour out one of Hollywood’s most iconic outer space movies.

What do Commander John J. Adams and his crew have to teach our space force? Disciple and mission-focus are the bywords of this company of space troopers.

Guards and the space cook get extra duty for slacking off. (Though, to be fair, how were they to know the monsters were invisible?)

When the ship’s doctor breaks the rules, he winds up dead at the hands of an alien machine. That will teach him.

In space, you can hear the captain scream. So follow orders! Our space force needs to be as professional as the crew of C-57D.

3. Starship Troopers (1997). Why do people hate this movie? Yes, it barely resembles the Robert Heinlein book it was based on. But hey, you get $127 million-worth of state-of-the-art-special effects, lots of alien-bashing action and entertaining characters.

Both Heinlein’s book and the film were criticized for flirting with ideas that seemed a bit fascistic. Fair enough, we don’t want Nazis in space. We already had a film about Nazis in space with Iron Sky, and it didn’t end well for Earth.

But we certainly want our space force to be patriotic. And we want them to defend America and its vital interests just as fiercely and doggedly as John “Johnny” Rico, his girlfriend Carmen Ibanez, and their psychic best friend “Doogie Howser” defended the Federation.

We need a force of space patriots.

2. Galaxy Quest (1999). In this send-up of Star Trek, a band of TV-actors are whisked into space to battle really bad aliens. This is arguably the funniest space movie ever. (It’s toughest competition in that category: Spaceballs and the Mystery Science Theater version of This Island Earth.)

Let’s face it. Our space force is going to need a sense of humor. A TV show making fun of the force is already in the works. Even serious researchers make jokes about the idea.

Clearly, our space guardians will have to be able to take a joke.

1. Hidden Figures (2016). Based on a best-selling non-fiction book, the film tells the story of black, female mathematicians who worked at the National Aeronautics and Space Administration and were a big part of why America won the space race. This is a moving and inspiring film, not to be missed.

This film also reminds what makes America a winner. We have to be smarter than the other guy. And that requires finding smart people and letting them do their stuff. That is what gives America the right stuff (which brings to mind another good space force movie—The Right Stuff).

We need a force that can outsmart our space enemies.

When not watching movies, James Jay Carafano is a Heritage Foundation vice president, directing the think tank’s research into matters of national security and foreign relations.