Is America Ready to Fight in the ‘Grey Zone’ Against Russia and China? 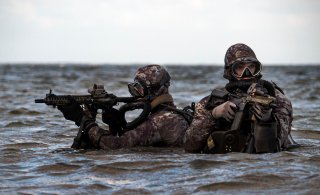 In recent years, the phrase “Grey Zone” has seen a great deal of use among military strategists and the media alike. Like so many buzz words (or phrases in this case) to come before it, the concept of the grey zone began as an important topic of discussion among military academics and policy makers, but quickly spiraled into headline fodder about America’s strained relations with global competitors like Russia, and increasingly, China.

So what exactly is the grey zone? It’s the metaphorical gap between peace and war, in which nations increasingly find themselves competing. Activities or operations in the grey zone, oversimplified, are clearly hostile acts that don’t meet the criteria to be considered an overt act of war. While the term itself does not have a single, unanimously-agreed upon definition, the Cambridge Dictionary offers a slightly more confusing explanation:

Grey Zone: Activities by a state that are harmful to another state and are sometimes considered to be acts of war, but are not legally acts of war.

The domain of America’s enemies

Russia’s grey zone activities may be among the most highly publicized, owing to both the nation’s heavy-handed use of cyber warfare campaigns and the aggressive actions of the nation’s covert operatives on foreign soil. Russia’s high-profile activities in the grey zone in recent years include the nation’s influence campaigns during the 2016 American presidential election, the attempted assassination of Sergei Skripal on UK soil in 2018, Russia’s successful hacking of the U.S. electrical grid in 2019, and countless others. Each of these actions prompted a critical response from the United States or other affected nations, but one could argue, none of those responses amounted to serious deterrence regarding future operations of the sort.

Russia is far from the only nation to engage in grey zone operations against the United States or its interests in recent years, however. China, Iran, and North Korea are all on the list of nations leveraging grey zone tactics of one sort or another in ongoing campaigns aimed at reducing or eliminating American advantages in realms ranging from kinetic capabilities to popular perception–and let there be no mistake, losing ground in either realm represents a security risk for the United States.

China’s grey zone is the size of the Pacific

China’s approach to the grey zone is perhaps best displayed throughout the vast South China Sea, where the nation’s illegal claims of sovereignty and military efforts to enforce them encroach on what would have once been considered literal acts of war, but are now relegated to the grey zone because open war is too severe an option to pursue. Chinese maritime forces, split between its Navy, Coast Guard, and Maritime Militia, amount to a massive 700-vessel fleet. China has used this numbers advantage to great success, surrounding Vietnamese oil platforms and starving the workers out to take control of natural resources, bullying nations off of their own fishing territory, and even fortifying island chains that international courts clearly ruled don’t belong to them.

China is able to act with relative impunity within the region, provided its forces don’t directly engage American personnel or equipment, for a simple reason: The world’s choices are to call China’s bluff and dive into a terrible war between nuclear powers and massive Naval forces… or resort to yet another round of public statements decrying China’s aggressive and illegal pursuits of territory and resources in the Pacific.

Iran’s downing of a U.S. Air Force RQ-4A Global Hawk remotely piloted aircraft in 2019 offers another powerful example of grey zone aggression. According to U.S. forces, the RQ-4 never came closer than 21 miles from Iranian shores, but Iran claims it closed to within just eight (international waters begin 12 miles from shore). Iran’s Revolutionary Guard fired on the Global Hawk with a Russian-made S-125 surface-to-air missile and the resulting hit cost the U.S. Navy a $220 million drone.

Firing on a military aircraft ostensibly flying over international waters is certainly a hostile act, but not hostile enough to warrant a new full-fledged war in the Middle East.

North Korea’s ballistic missile tests could easily be considered grey zone hostile acts, but it’s worth noting the soft power of grey zone activities as well, and North Korea’s own narrative campaigns are under-discussed. While China’s soft-power foreign influence comes in the form of bags of money (investment) and Russia’s often looks like social media troll farms, North Korea’s adoption of a Chinese narrative about the United States acting as an imperial “bully” in the Pacific demonstrates the value of international media as a coordinated tool for grey zone operations.

As the Trump administration applied pressure to North Korea’s Kim Jong Un to end his nation’s pursuit of nuclear weapons and ballistic missiles to ferry them to far-flung targets, the nation that usually trades in aggressive threats had a sudden change of heart. Instead, Kim assumed the role of embattled leader trying to keep the American wolves at bay as the United States bullied the small nation into submission. The truth, of course, was that Kim’s nuclear efforts were always about securing leverage for international negotiations, and the North Korean regime simply saw the value in discrediting a polarizing president’s approach to pressuring them on the world’s stage.

The switch from disputatious fight-mongering to playing the role of the victim is not, in itself, a very hostile act — but the coordination between North Korea’s chosen narrative and China’s public statements in the same vein had specific intent. Delegitimizing America’s position on the Korean continent in the world press not only helped to present China as the reasonable diplomatic leader in the region, it helps to discredit America’s own critical statements about China’s own aggressive acts.

Every nation, from the smallest to the largest, operates in the grey zone, and that includes the United States. Most of the operations conducted by the CIA, as well as many conducted by America’s special operations forces, could all be classified as grey zone operations–or hostile actions taken in foreign territory that are not considered acts of war. The truth is, there’s always been a grey zone, the concept has just benefited from better branding in the 21st century.

Despite political infighting and social issues that have risen to the forefront of American consciousness in recent years, the nation itself remains incredibly safe, prosperous, and powerful. That’s actually a problem when it comes to deterring or defending against grey zone operations. Nobody wants a new war, and the truth is, nobody would benefit from one either. Bad actors are just as aware of that as good ones.

Economic sanctions like those levied on Russia and North Korea have proven to be rather effective at making life harder for specific facets of aggressive governments, but not quite effective enough to serve as a real means of deterrence. North Korea’s situation has steadily worsened as a result of new sanctions levied by the U.S. and its allies in recent years, but even as troops literally starve on their posts, Kim’s nuclear ambitions remain undeterred.

Russia’s heavily sanctioned economy has left the nation unable to fund its military modernization efforts and has forced its military-industrial complex to pursue headline-grabbing pseudo-technologies aimed at foreign sales, rather than strategic capability. But, Russia has proven no less apt to engage in aggressive grey zone activities after new sanctions are levied. There’s good reason for this in both cases: The damage of economic sanctions has already been done. The deterrent value of sanctions diminishes as they’re levied. You can only take away the same dollar so many times.

That leaves the United States with little recourse but to threaten retaliation when it comes to the grey zone, but that’s where things get a lot more complicated. If the U.S. chooses to retaliate in kind within the grey zone, it discredits America’s initial complaint about the legality of the inciting incident. If the U.S. hacks Russia’s electrical grid in response to Russia hacking America’s, it legitimizes hacking for both nations as a necessary defense exercise. If, however, the U.S. opts to respond with conventional military force, it risks a new World War between nuclear powers.

Neither is a particularly enticing proposition.

Why doesn’t America just get dirty in the grey zone?

If the global community were as simple as your local bar, nations like Russia could be likened to the shorter-statured but stout guy who’s always looking for a fight, but benefits from the policing presence of the community. Even if you’re sure you could beat that guy up, there’s no real value in doing it. You’ll just have to eat a few punches, get blood all over your shirt, and spend the night in a jail cell. Likewise, the United States would almost certainly win a war with Russia… but to what end? America, and the world, would almost certainly be worse off when the dust finally settled.

So, in the same way you’ll tolerate sarcastic remarks and sideways glances from the bar’s resident tough-guy, America is forced to tolerate increasingly aggressive acts from bad actor nations. Part of the problem is actually rooted in America’s strength as a nation and the world’s success at avoiding the horror of global war for the past 75 years: It’s just not worth risking World War III over a Russian spy ring infiltrating NATO defense files in Bulgaria.