America Should Be Disappointed In China's Progress Towards Democracy 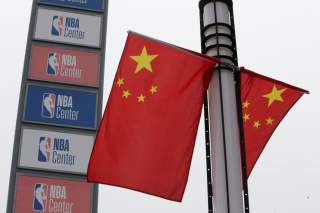 The following is the latest in a series of blog posts accompanying newly-released Bradley Lectures Podcast episodes. The subject of this post is “Democracy with Chinese characteristics,” an episode examining Arthur Waldron’s 2000 Bradley Lecture, “China after communism.”

When Daryl Morey, general manager of the NBA’s Houston Rockets, recently tweeted in support of protestors in Hong Kong, the backlash was swift and forceful. Morey quickly deleted the tweet and apologized to the Chinese government. Meanwhile, a cohort of professional basketball players demonstrated their obeisance to the Chinese Communist Party by repudiating Morey’s call to “fight for freedom” as Chinese police cracked down on anti-government demonstrators. “We apologize. We love China,” said former NBA MVP James Harden. “They show us the most important love … we appreciate the support that they give us individually and as an organization.”

The damage was done – the Rockets have lost millions for offending the autocrats in Beijing – and the message has been received: American businesses are free to dip into the honeypot of the Chinese economy, on the simple condition that they bring no attention to the Communist Party’s totalitarianism, human rights abuses, and vicious opposition to freedom movements.

Which brings us to the paradox at the heart of China’s political economy. China today is a curious combination of economic liberalism (to an extent), together with a system of government and social organization that is anything but liberal.

To be sure, the degree to which China has liberalized is unclear, because the Communist Party and its oligarchs still exert state pressure on many businesses while consistently exaggerating China’s economic growth. But what is clear is that the decision in the late 1970s to loosen price controls, decentralize economic policymaking, and allow foreign investment have greatly improved quality of life for many Chinese citizens.

University of Pennsylvania Professor Arthur Waldron observed the success of China’s economic liberalization at the end of the twentieth century and tried to outline how China would develop politically in the twenty-first. In his September 2000 Bradley Lecture, the subject of this week’s Bradley Lectures Podcast, he expressed optimism that continued liberalization would elevate the Chinese middle class, and hopefully lead to greater democratization. Nearly twenty years later, Professor Waldron appears to have been half-justified in his optimism. Economic liberalization fueled tremendous growth of the Chinese economy – giving the government yet more leverage to double down on its autocracy.

What is more interesting than simply revisiting Waldron’s predictions, though, are the conditions he outlines for turning a liberal economy into a liberal state, and what these conditions tell us about statecraft — even in the United States. “You have to base order on coherent local communities,” argues Waldron, citing Chinese democratizers from the early 1900s. “Built on local democracy and provincial democracy, you can build a national democracy.”

Courts, too, are integral — especially independent courts that can rule safely against the government. Without courts enjoying legitimacy and authority, the vacuum of dispute resolution is filled by whoever has the bigger gun. In China, the lack of an independent judiciary only reinforces one-party military rule.

As China ascends as a counterweight to the United States on the geopolitical stage, one imagines that its greatest fear is the proliferation of James Madison’s Federalist Papers. In the Federalist, Madison identified the key ingredients for liberalization, many of which China still lacks: Decentralization, republican democracy, separation of powers, and an independent judiciary, to name just a few.

Contrary to Waldron’s hopes, China has banned many of the institutions that make a republic possible, and uses the lure of its billions of consumers to effectively ban outsiders from speaking ill of its abuses. In his optimism regarding Chinese democracy, Waldron may have overlooked the impulse to use liberalism of one kind to suppress liberalism of another. Liberal democracy requires much more by way of institutional strength, norms, and virtue among the governing class than does simple economic liberalism.

For China’s own sake, one only hopes that Madison’s ideas are not banned there too.