America Should Not Run from Afghanistan While Afghans Still Fight 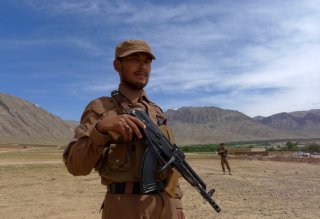 The Taliban have control over thirty-two of Afghanistan’s thirty-four provinces. But one, Panjshir, is firmly in government hands, and a second is contested, with at least three districts retaken by Northern Resistance forces as of August 20. We should not as a nation be rushing to raise the white flag of surrender to the Taliban and throw our Afghan allies under the bus before the Taliban even get the flagpole erected and the bus started. Under both international law and the Afghan Constitution, the lawful president of Afghanistan is now First Vice President Amrullah Saleh, and he is in Panjshir Province with a force of some 10,000 men, including about 6,000 commandos. Defense Minister Bismillah Khan Mohammadi is there as well. They have at least five operational helicopters and a number of armored vehicles. They have been stockpiling ammunition and supplies for four years.

The Panjshir Valley was the heart of Afghanistan’s resistance to the Soviet invasion from 1979 to 1989 and it never fell to the communists. The Soviets attempted at least nine assaults into the Panjshir with huge armored forces, armored personnel carriers, and Hind gunships. Their wreckage litters the valley floor to this day. The Taliban would not fare better. Since he became president, Joe Biden has promised to continue to support the lawful government and armed forces of Afghanistan, and under international law, the lawful government of Afghanistan is still on Afghan soil. It urgently needs international support. There are other centers of resistance in other parts of Afghanistan as well, notably in Nangarhar Province and in Khost Province, where the Khost Provincial Force comprised of around 4,000 Zadran and Kharoti Pashtun tribesmen remain fiercely anti-Taliban as they have been for a quarter-century. And Afghan society itself has changed dramatically since the last time the Taliban were in power. Half the population of Afghanistan has no memory of Taliban rule and its draconian laws. The Taliban are faced with overrule of a population which does not support them. Just because they would not fight for the corrupt and incompetent Ashraf Ghani does not mean they want the Taliban in power.

The United States does not have to run from Afghanistan. We can keep our promises and support the bona fide Afghan resistance to the unlawful seizure of power in Kabul by an illegal armed group. We can help the Afghans continue the fight, and not least in so doing, salvage some of our national honor. We have been in this position before, in the Philippines in 1941, for example, when the Japanese invaded after Pearl Harbor. Powerful Japanese forces captured most of an unprepared U.S. Army garrison and forced the unprepared U.S. Navy conventional forces out of the Philippines. U.S. prestige in Asia was at a low ebb then too. However, resistance among the Filipino population to the brutal and rapacious occupiers began immediately. A number of U.S. personnel escaped Japanese captivity and helped organize and fight with guerilla bands in the mountains of Luzon. Later, the United States supported guerilla units there, as well as in Burma, China, Vietnam, France, and other occupied countries. As my colleague Dr. Barnett Koven and I discussed here in May, this is originally exactly what the U.S. Army Special Forces were created in the 1950s to do: The first mission envisioned for the Special Forces was to support resistance forces in enemy-held territory in Europe in the event of a Soviet invasion.

Both China and Russia are now chomping at the bit to get back into Afghanistan and start supporting the Taliban usurpers. Neither country gives a hoot about international law or human rights, as their behavior at home has demonstrated. The economy of Afghanistan was in bad shape before the Taliban seized most of the country; now it will crater. The value of the national currency, the afghani, is at an all-time low. The Taliban believes it does not need much Western diplomatic recognition to govern, however, because China has assured them it will arrive with cash to fund their illegal government. China just wants access to Afghanistan’s mineral wealth in return, of course, beginning with the copper at the mines at Mes Aynak, where China tried and failed a decade ago to exploit Afghanistan’s resources. The first quid pro quo for China’s recognition of the Taliban’s illegal seizure of power will be a guarantee of security for its legal looting of Afghanistan’s copper.

This would be a much worse bargain with the devil for China however if the transportation infrastructure required to extract the minerals were vulnerable to guerilla sabotage and destruction of roads, rail lines, and bridges. The Taliban were good at insurgency, but they have no experience in counterinsurgency at all, and no means of maintaining an armed security force beyond a few local thugs with guns. International aid from the United States and Europe funded 90 percent of the Afghan government, including all military salaries. The Taliban will receive none of that. Instead of a large military, from 1996-2001 in areas they controlled they relied on fear, terror, and intimidation to maintain order and prevent resistance. Since China is not going to station troops in Afghanistan, defending Chinese debt trap investments will be on the shoulders of the Taliban alone.

In the new era of “Great Power Competition,” the United States must be willing to employ all means available to win. We are clearly not winning the economic war with China now, nor the “war of ideas.” The fiasco in Afghanistan this summer has made countries around the world doubt the wisdom of alliance with the United States. Even our NATO partners are discussing a world order without a reliable United States to back it up. In this new era, we will not always be able to throw our conventional weight around as we did during Desert Storm, and great power competition is highly unlikely in any case to take the form of the kind of major conventional armored warfare of the type the U.S. Army prefers to fight. The struggle for a free and fair global economic order will instead be fought by China and Russia in the shadows, with industrial espionage, debt-trap diplomacy, bribery, cyber sabotage, critical infrastructure attacks, and paramilitary guerillas. The United States standing up for democracy and free and fair economic systems is the right thing to do. But whether we like it or not, just espousing high-sounding policy goals while playing by the Marquis of Queensbury rules is not going to win that fight, any more than it won the Cold War.  If we don’t relearn from the last period of great power competition and reengage in this war in the shadows, China’s momentum will only accelerate, and Russia will continue its grey zone machinations to realize Vladimir Putin’s dream of restoring Russia’s former empire.

Recognizing and supporting the legal government of Afghanistan in the Panjshir will not be without risks and costs. But it would show the world that we d.o stand by our friends. It would provide a critically-needed counterterrorism toeprint in the middle of Afghanistan, where Al Qaeda is now present in fifteen provinces. A small covert presence could enable the delivery of critical supplies to the resistance, such as spare parts for their helicopters, medical supplies, and aviation fuel via cargo drone. It could be supported by unmanned aerial vehicle (UAV) capabilities like the RQ-4 Global Hawk aircraft. The new Aevum surveillance and cargo drone offers even greater support options. One of the MH-47G Special Operations Chinook helicopters in Afghanistan now could be flown into the Panjshir. The MH-47G can operate at up to 19,000 feet and has midair refueling capabilities, giving a small special operations forces element an emergency exfiltration capacity. There are certainly challenges and obstacles to overcome as well, such as the lack of a paved airstrip in the Panjshir. But this can be done. We have done it before. It will take political courage and commitment to our allies, and it will stretch our long-range covert mission capabilities to the limit, but it can be done. For our national security in combating Al Qaeda, ISIS, and Haqqani network terrorism, it should be done. And the whole world is watching