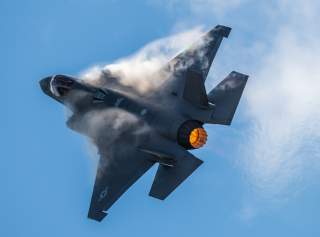 The U.S. Air Force could be months away from deciding whether to put into production its first, fighter-style “wingman drone.”

“Reporting the company’s second-quarter 2019 results in a [July 31, 2019] earnings call, Kratos president and CEO Eric DeMarco said that the company was confident that Valkyrie was “on track for initial production and a programme of record,” according to Jane’s.

“The XQ-58A demonstrator is powered by an off-the-shelf Williams International FJ33 twin-spool turbofan,” Jane’s noted. “It has not been confirmed if this engine type is being retained for follow-on production.”

The Air Force’s wingman drone initiative is moving quickly. The Air Force Research Laboratory’s Skyborg program is developing artificial intelligence for the wider wingman-drone effort. To develop the hardware, AFRL is experimenting with copies of the subsonic XQ-58.

The Air Force wants an early version of a wingman drone to be ready for combat by 2023. Kratos is betting that the service will tap the XQ-58 as the basis for a combat-ready wingman ‘bot.

“What we have here today is a sub-scaled jet-powered aircraft; it’s about 12 feet long and do about 250 knots,” stated Jeff Jessen, an engineer with the Emerging Technology Combined Test Force. “Our goal is to verify an autonomy safety net.”

The Testing Autonomy in a Complex Environment software, or TACE, is a product of the Applied Physics Lab at Johns Hopkins University.

David Axe serves as Defense Editor of the National Interest. He is the author of the graphic novels War Fix, War Is Boring and Machete Squad. This first appeared in August 2019.