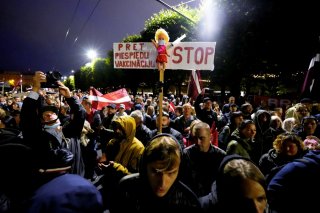 There’s a saying that when the United States sneezes, the world catches a cold. Now some of the world’s most robust immune systems are struggling with a bad case of QAnon.

The three Baltic countries—Estonia, Latvia and Lithuania—are some of the best-prepared on Earth to defend against the evolving threat of modern information campaigns. Their governments, businesses and civil societies honed their skills against Russian information and cyber warfare for nearly a decade before the United States uncovered evidence of Russian interference in the 2016 presidential campaign.

The coronavirus panedemic was a major stress test for the Baltics, forcing intelligence and strategic communications analysts to reconfigure their Russia-centric threat models in order to face a tsunami of misleading information coming not just across their Eastern border, but from every corner of the Earth. The Latvian Strategic Coordination Department coordinated crisis communications while also supporting the volunteer-run Kopā pret COVID-19 (“Together Against COVID-19”) initiative. In Estonia, the government’s strategic communications team called on an emergency reserve of crisis communication experts. At DebunkEU.org’s headquarters in Vilnius, Viktoras Daukšas reported that his staff worked fourteen- to eighteeen-hour days during the initial months of the pandemic in order to monitor and analyze a three-fold increase in digital mis- and disinformation.

They noticed an alarming new trend among the most popular pieces of disinformation. “Typically, videos in the Lithuanian language on Youtube might have maybe 100k [views] - if it’s a really popular one, 300k. But then we started to analyze and we found twelve videos in the Lithuanian language that were viewed more than three million times. Which is crazy,” added Daukšas. “And all of them are conspiracy theories—about 5G, about COVID, and about QAnon.”

“The summer and autumn of 2020 saw an explosion in the number of Lithuanian Twitter accounts containing the letter Q,” Re:Baltica reported last February. Conspiracy-minded individuals in the Baltics used QAnon-related hashtags like #WWG1WGA, #Q17, or #savethechildren to attract online audiences or to learn about the latest anti-lockdown protest techniques. References to "Plandemic," the most popular piece of coronavirus-related conspiracy media in the United States last year, appeared on protest signs across the Baltics, alongside anti-LGBTQ narratives, anti-5G slogans, and accusations that Bill Gates is injecting the world’s population with microchips via forced vaccinations.

The similarities between anti-COVID narratives in the United States and abroad is “a question of conspiracy theory templates,” according to Nerijus Maliukevičius, a professor researching information warfare and strategic communications at the University of Vilnius. QAnon hashtags served to connect bubbles of conspiratorial belief across borders and language barriers. “If something becomes a story in the States, it spills into all other conspiracy theory bubbles.”

As Americans learned from last January’s Capitol insurrection, QAnon and its adherents can inflict real violence. I spoke to Maliukevičius after an estimated 5,000 Lithuanians gathered outside the national parliament on August 10 to protest against new restrictions for unvaccinated individuals. According to local reporting, protesters erected improvised gallows with the inscription “For Lithuania’s Traitors” and compared COVID restrictions to Nazi Germany. Twenty-six people were arrested and eighteen police officers were reportedly injured after the protests turned violent. A week later, another 5,000 demonstrators flooded the Latvian capital of Riga after the government announced compulsory vaccinations for some professional groups, marking the country’s largest protests since 2009. When Maliukevičius saw that protesters in both Vilnius and Riga used the Star of David as a symbol of perceived discrimination, he realized these demonstrations were part of “the same dramatization that is played out by anti-vaxxers” in the United States and Europe.

Online conspiracy networks play a central role in organizing anti-lockdown protests in the United States and around the world. “A lot of the [protest] tactics actually come from abroad, and the content as well, for the domestic disinformation actors,” noted Nora Biteniece, a consultant for the Strategic Communications Coordination Department at the State Chancellery of Latvia. “They follow groups—foreign disinformation or COVID-skeptic groups—then they just translate the content and put it on their websites, on Facebook and so on.” For example, she saw protests against coronavirus restrictions in Latvia increase in size and sophistication after “World Freedom Rally” protests organized by coronavirus skeptics in Summer 2020.

The QAnon constellation of conspiracies threatens global public health by promoting both vaccine hesitancy and physical violence. A recent FBI assessment noted the connection between QAnon and domestic violent extremism, and acknowledged that “the current environment likely will continue to act as a catalyst for some to begin accepting the legitimacy of violent action.” Facebook banned QAnon in October 2020 after an unprecedented surge of conspiracy content, but a report from the Institute for Strategic Dialogue concluded that the ban “came too late.” An international network of conspiracy theorists continues to propagate anti-vaccination and anti-government narratives on the site in at least fifteen different languages.

Fueled by the pandemic, QAnon adherents and anti-vaxxers have become “a new type of International,” observed Maliukevičius, drawing a comparison between the old Soviet Communist International and the modern conspiracy movement. “What is fascinating to see is how QAnon and conspiracy networks movements create a global network or movement, and this can really be seen in Lithuania. It’s not so much ideological, but based on conspiracy, all things anti-systemic, a very complex picture you have here from extreme-right to extreme-left.”

QAnon is an unquestionably American phenomenon, and its international proliferation is embarrassing at best. At worst, QAnon, anti-vaxxers and other conspiracy groups are prolonging the global pandemic and fomenting anti-government violence against the United States and American allies. The problem will likely get worse without meaningful interventions, and after several years of neglect from platforms and policy-makers, QAnon and coronavirus conspiracies are deeply entrenched online.

What can we do to solve our QAnon problem? There is no easy solution, but we can take inspiration for best practices from the Baltics. The simplest place to start may be improving the Centers for Disease Control and Prevention's (CDC) communication practices, which have been criticized throughout the pandemic for being unclear, contradictory or withholding information the CDC used to decide public health guidelines. In an evolving crisis like the COVID pandemic, transparency about what officials do and do not know goes a long way towards shoring up trust in public institutions.

When it comes to vaccine hesitancy, outreach to local activists and media influencers plays a vital role in spreading information to hard-to-reach demographic groups. Because QAnon and anti-vaccine conspiracies frame COVID vaccines as part of an international government conspiracy, interrupting that framing via interpersonal encouragement and community outreach may be the most effective way to increase vaccination rates among those who are still hesitant.

We should also consider larger, structural changes that would increase our foundation of institutional trust. “You can’t solve disinformation tricks and acts just through communication, and debunking and things like that,” Biteniece observed about the domestic disinformation problem in Latvia. “In the long term, we need to improve the quality of our education, we need to improve the socioeconomic situation in the country.” Providing economic relief packages, freezing rent payments, and delivering other kinds of material assistance improves people’s quality of life, reduces fear and uncertainty, and undermines the effectiveness of conspiracy groups that rely on distrust in government to recruit new followers.

When it comes to our digital information environment, the United States also has unique regulatory jurisdiction over social media companies. Facebook is the most popular social media network (and the de facto internet) in several countries, including the Baltics. The company has also become increasingly secretive about its inner workings, and implemented a number of changes that collectively make it harder for independent researchers and monitoring organizations to understand the spread of dangerous misinformation on its platform. Requiring more data transparency would help the public better understand the extent of our disinformation problem, the main actors, and whether Facebook has done enough to address anti-vaccination conspiracies and other dangerous misinformation on its platform. At the very least, access to Facebook data would give us a clearer assessment of the threat of disinformation and online conspiracies. If the platform is really a neutral mirror reflecting the ills of society without causing them, people deserve to know.

These conspiracy networks are not just a bump in the road to the return to normal life. They are their own viral contagion, spreading beyond American borders to infect our allies. The United States didn’t create the pandemic (unless you believe certain conspiracies from Russia), but until it takes measures to contain the spread of viral disinformation, it will be accountable for prolonging it.