An American-Made Greek Tragedy: Coronavirus and the Thucydides Trap 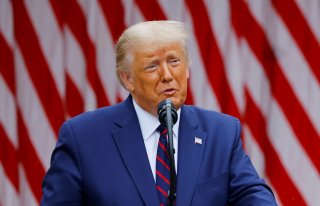 The ongoing contest with China is transforming America’s domestic and international policies, raising an alarming corollary to Graham Allison’s “Thucydides Trap.” Drawing upon Thucydides, Allison worries that the United States and China are headed toward war as a result of great power competition when a new power rises as an old power falls. The Thucydides Trap Corollary follows from Allison’s observation, but also accounts for the additional damage that great power competition inflicted on Athens as both a democracy and empire. The real question is not whether the United States can compete with China without resorting to war (the Thucydides Trap), but whether it can compete with China without becoming more imperial abroad and less democratic at home (the Thucydides Trap Corollary).

Thucydides’ rich account transcends the great power conflict between Athens and Sparta. Each city-state led large alliance systems, ensuring that the war affected the entire Greek world. The Peloponnesian War was also a competition between two different systems of government, democracy and oligarchy. Great power competition between the United States and China will parallel the Peloponnesian War as a struggle between two global alliance systems and their competing systems of government.

Thucydides devoted as much of his investigation to the internal political divisions plaguing democratic Athens as he did the actual fighting between the two main adversaries. Thucydides himself was a victim of Athenian democracy, exiled for his alleged failures as a general. He therefore highlighted the weaknesses of a democracy at war. Too many convulsions—social, political, and even natural (such as coronavirus)—are currently shaking the United States. Accompanying these events are challenges not only to American leadership in the world, but also to the democratic model and global order imparted by the United States. Like Athens, the United States stands to lose its democracy at home and influence abroad as a result of long-term great power competition.

A History of Paradoxes

The American Republic is the product of Britain’s great power competition during the Seven Years War from 1756 to 1763. Britain became more imperial and authoritarian towards the American colonies as a result of the war. The cascading events led to the American Revolution. Following independence, the Founders, who were steeped in history stretching from Ancient Greece to contemporary Britain, warned succeeding generations of Americans to avoid foreign entanglements, wars, and a standing army as threats to liberty. At the same time, the early American republic displayed a troublingly similar tendency to Athens.

Sparta won the Peloponnesian War by beating Athens at its own game. Sparta, a land power, built its own fleet and defeated the Athenian navy, the source of Athenian power. Paradoxically, China seems to have learned lessons from the Cold War and Soviet collapse by “liberalizing” its economy and legitimizing its foreign policy with appeals to international law and institutions. Meanwhile, the United States toys with more illiberal domestic policies just as it adopts an increasingly domineering approach to the alliances and international system it largely created and nurtured. The United States is learning the wrong lessons from history.

Thucydides explained that Athens lost not only the power but also the legitimacy to maintain its empire. The United States is losing legitimacy at home and around the world as a democracy and an Empire of Liberty. Disinformation campaigns by adversaries have encouraged some observers to call for U.S. government intervention and regulation in the sources and types of information available to the public. Chinese economic espionage and manipulation have also caused the United States to pivot towards protectionist and neo-mercantilist measures, a shift towards a statist economic system and away from the free trade system the United States spent the last century promoting. As the rest of the world looks on, American democracy—the Jeffersonian example undergirding the Empire of Liberty—looks less democratic, and even less appealing as a system of government to weather the inevitable domestic and foreign crises of a great power.

The Empire of Liberty is also behaving more imperiously just as China challenges the United States as a global leader. The United States is adopting a bullying posture towards its allies like Athens did before it. Critically, the United States needs a durable alliance structure if it hopes to contain Chinese expansionism and China’s own fledgling neo-imperial projects like the Belt and Road Initiative. For its part, China is actively seeking to supplant American leadership by undercutting American alliances and usurping the American-inspired global order to portray itself as a legitimate and rule-bound member of the international community. Is the world better off with America or China at the helm? Reading Thucydides, the choice is not as obvious as it may appear.

During the Peloponnesian War, Athens and Sparta each argued to domestic and “international” audiences that it was trying to defend itself and the rest of Greece from the threat posed by the other. Freedom is therefore in the eye of the beholder, and both the United States and China frequently try to make the public case that the other is the real threat to freedom. American domestic and international policies amid the coronavirus pandemic are straining the U.S. position in this debate.

Thucydides explained that the disastrous Sicilian Expedition was the product of demagoguery and partisan politics, not sound policymaking and strategic thinking. Competition with China means the United States requires the patience and prudence to have internal debates across a range of issues in order to form sound national policy and strategy. Sadly, demagogic and partisan speeches have already displaced patient and prudent debate despite the very real threat China poses to American democracy and global leadership.

Thucydides also warns that war can divide a democracy rather than unite it. The so-called “Cold War consensus” in the United States during the 1950s collapsed during the 1960s due to perceived illiberal activities at home and corresponding imperial behavior abroad. The United States today appears incapable of forming coherent national policy and strategy for long-term competition with China due to internal divisions and opposition politics. Coronavirus has highlighted the problem.

The fault for the coronavirus ultimately lies at China’s feet. This simple acknowledgment in no way supports the conspiracy theory that China created the coronavirus. Ironically, China has leveled that exact accusation at the United States, leading to a propaganda war of sorts between the two rivals. However, China mishandled the unfolding pandemic at home, and then misled the world over a global crisis that was China’s initial responsibility to manage and mitigate. And yet, the United States became the target for both domestic and international blame and derision due to the Thucydides Trap Corollary.

Domestic opposition politics have completely overshadowed China’s original sin. Instead of underscoring how coronavirus illustrates the challenges of long-term competition with China, the discussion in the United States has devolved into blame-shifting between the Republicans and Democrats over the coronavirus response. In fact, a plague in Athens during the early years of the Peloponnesian War contributed to internal divisions that weakened Athens over the long course of the war. Coronavirus has even further destabilized American domestic politics and policies. The United States has managed to turn coronavirus—a challenge originating from China—into another successful weapon in China’s ongoing efforts to subvert the legitimacy of American democracy. Undoubtedly, China has taken note.