Americans Are Coming Together Over Paid Family Leave 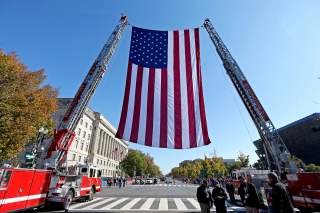 Amidst many controversial issues roiling the news these days — impeachment, trade wars, an impending presidential election — one policy matter has become increasingly less contentious: paid family leave. In the past week, two major developments have occurred. First, Senators Cassidy and Sinema, along with Representatives Stefanik and Allred officially released their bipartisan paid parental leave bill. Second, a bipartisan agreement that is set to be signed by the White House included a provision added to an annual defense bill that will provide 12 weeks of paid parental leave to federal employees. It is laudable to see an honest effort at bipartisan compromise in these increasingly polarized times.

First, there was las week’s introduction of the Cassidy-Sinema bill. Their proposal redesigns the Child Tax Credit (CTC) by allowing parents to advance $5,000 from future credits at the time of the birth or adoption of a child. Currently, parents can claim $2,000 each year. When a parent decides to pull forward benefits, parents would reduce their CTC by $500 for the next ten years. Low-income families who do not qualify for the full benefit can claim a benefit adjusted to 100 percent wage replacement for 12 weeks of work.

The Cassidy-Sinema plan has its pros: It targets low-income families, (according to the Bureau of Labor Statistics, only 8 percent of individuals in the bottom wage quartile have access to paid family leave), it is relatively budget neutral, it is optional, and importantly, it has bipartisan political traction. However, it is not perfect. Experts have discussed these pros, as well as the drawbacks, alongside Senators Cassidy and Sinema. One drawback is the lack of explicit job-protection. Also, as per the 2017 tax reform, the expansion of the CTC to $2,000 is set to expire in 2026, so in order for this plan to work in years to come, this provision must be expanded permanently. In addition, not all of the current $2,000 is fully refundable. While some have claimed that this bill “offers loan, not leave”, at minimum, pulling forward tax benefits at critical moments for families could help support childcare costs and other expenses that occur at the time of birth or adoption.

The second big change is the proposed paid leave for federal employees. Currently, military service members can take up to 12 weeks of paid leave after the birth or adoption of a child, while civilian federal employees only receive the 12 weeks of unpaid leave. This soon-to-be federal legislation brings parity to civilian and service member benefits. While the legislation is limited as it only extends (very generous) paid leave to 1.7 percent of all workers, Democrats have called this step a “crucial win”, and Ivanka Trump has said that this will “mark a huge step forward towards making paid leave a reality for all Americans.” Proponents hope that it will provide a model for the private sector.

And they are right. To move from unpaid coverage to 12 weeks of paid leave for 2.1 million individuals is a major step for American families. The exact details of the legislation and the Congressional Budget Office’s scoring remain to be seen. The cost will largely depend on the wage replacement rate and maximum weekly benefit cap. There is a work requirement similar to that of the current FMLA. We anticipate that the policy will not be very costly, however, because it only covers federal employees. Using a cost model developed for the AEI-Brookings Working Group on Paid Leave, we estimate that a federal parental leave policy of 12 weeks with similar work requirements as the proposed, a 60 percent wage replacement rate, and maximum benefit cap of $600 per week would cost between $9 and $12 billion per year, if extended to all Americans. Since this policy only reaches about 2 million Americans, the cost will be a fraction of that.

While neither development is perfect on either side of the aisle, nonetheless, both recent proposals provide the opportunity to pave a clearer pathway toward financial security for all parents. One such example of effective compromise is the AEI-Brookings Working Group on Paid Family Leave plan that advocated for eight weeks of paid, gender-neutral parental leave with a 70 percent wage replacement rate, job-protection, and funded by an employee payroll tax (an estimated increase in the payroll tax by less than a quarter of a percentage point). This plan, much like proposed current legislation, was not the ideal plan for anyone among the ideologically diverse working group of experts. Yet, it is a compromise that everyone felt was more beneficial to the American people and society than the alternative — inaction.

With a similar sentiment of compromise, the urgency to prioritize the needs of American families, and a spirit of continued care for our fellow citizens, we hope that this impetus on paid leave will continue and be a significant part of the 2020 policy agenda.

Erin Melly is a research associate at AEI.