America's 6th Generation Fighter Could Be Everything: 4 Things It Must Have 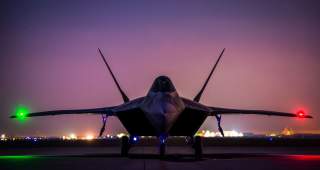 While the United States moves towards full-scale of the fifth-generation F-35 Lightning stealth fighters, countries like France, Germany, Japan and the United Kingdom are looking to skip ahead to an even more advanced sixth-generation.

It’s too soon to identify for sure what the sixth-generation jets will look like, as none exist yet, and they are only planned to enter service starting in the late 2030s and 2040s. However, there are many technologies likely to feature in the sixth generation of aircraft.

Of course, it is the nature of arms races and military industrial complexes to already looking ahead to the next game in town. Thus the Navy and Air Force are already courting concepts from the defense industry on separate sixth-generation successors to the F-35, called the FA-XX and Penetrating Counter Air respectively.

After the frustrations experienced in reconciling the Air Force’s and Navy’s differing demands for the F-35—and the mere 20 percent parts commonality that resulted between the two—the two services have little desire to jointly develop the Lightning’s successors. The PCA is intended to be a long-range escort fighter that can accompany forthcoming B-21 Raider stealth bombers into enemy airspace and protect them from enemy fighters. The FA-XX will likely be an interceptor that can better protect Navy carriers from enemy bombers and missiles.

Either way, following the F-35 which emphasized strike capability over air-to-air characteristics, U.S. sixth-generation fighters will likely reemphasize air superiority. Whether that means renewed emphasis on maneuverability or a return to sustained supersonic flight (supercruise) remains up for debate.

But the following four technologies will likely be shared both the air forces and Navy’s otherwise dissimilar future jets.

Critics of stealth aircraft have long claimed that stealth technology is always on the verge of obsolescence thanks to the power new sensors and clever tactical ploys.

But in reality, stealth has never been a game of absolutes. Stealth aircraft were never completely undetectable to radar nor infrared, and no existing sensor technology promises to completely nullify the benefits of reduced radar and infrared signatures.

But the naysayers have pointed out that the more stealth aircraft proliferate, the more technologies and tactics tailored to defeat them—low-bandwidth radars, cooperative engagement technology networking multiple radars together, and long-rage infrared-search and track systems—will become normalized as well.

These technologies won’t render stealth useless, but like a bachelor’s degree in a developed economy, it will become an increasingly basic requirement to participate in many scenarios, not an automatic ticket to success.

In short, aircraft will need at least some degree to survive at all in contested environments—but they won’t be able to count on reduced radar cross-sections to keep them alive by themselves. And the exorbitant price necessary to obtain the very highest degrees of stealth may have to be judiciously sacrificed in favor of cost and kinematic performance.

Most of the fourth and fifth-generation fighters serving in the U.S. military have fairly short effective combat radiuses when flying on internal fuel. Non-stealth jets can at least compensate by lugging external fuel tanks and topping up with in-flight refueling from airliner-sized tanker aircraft. But both those solutions will compromise the radar signature of a stealth aircraft.

This is an acute problem, as highly precise cruise, ballistic and hypersonic missiles are rapidly proliferating across the planet—and these could blast parked jets, and the extensive support infrastructure they depend upon, extremely rapidly. An untouchable sixth-generation stealth jet on a tarmac in Okinawa or the deck of a carrier in South China Sea might face long odds of surviving a massed missile strike that could fall from the sky with only a few minutes warning.

For these reasons, larger internal fuel capacity allowing safer and more flexible basing will be priorities in future sixth-generation jets. This will likely result in larger aircraft with coincidentally greater payload.

Large internal fuel volume is not the only possible solution. Other approaches might involve development of stealthy in-flight refueling tankers, or stealthy conformal fuel tanks. And of course, proliferation of standoff-range cruise and hypersonic missiles promise to allow strike planes to attack defended “bubbles” of airspace from further afield as well.

Manned-Unmanned Teaming (As In, Teeming with Drones)

As it becomes harder and harder to conceal stealth aircraft from the prying eyes of advanced sensors, the cleverer and potentially cheaper solution might be simply to throw in the towel and show them everything—as in hundreds of potential targets, making it difficult for foes to figure out which target amongst a hundred decoys is the real one.

You can see how such a tactic could be implemented in footage of this terrifying test in which U.S. Navy Super Hornet deployed 103 gnat-like Perdix drones. At the one-minute mark, you can see their radar returns rapidly multiplying like a swarm of locusts.

Of course, drones used as decoys need to be modified to appear fighter-like on radar, as has been done somewhat expensively with the Air Force’s MALD-X drone decoys. The Australian Air Force, meanwhile, has led the way by ordering “Loyal Wingman” type drones designed to back up pilots with additional sensors and weapons—and presumably, catch a missile for them if necessary.

However, unlocking the full potential of future loyal wingmen requires a number of integrated technologies, including advanced artificial intelligence so the drones don’t require too much direction from already over-tasked combat pilots, and resilient networks that can maintain secure command links with friendly forces even in the face of enemy electronic warfare.

Of course, future jets might also be using their own electronic warfare tech driven by artificial intelligence to try to disrupt their adversaries as well.

Electrical Generation (as in, Jet Fighters that Could Light Up your Christmas Tree)

As jet fighters grow more complex and accumulate diverse arrays of sophisticated avionics, the demands on their electrical generating systems are growing as well—to the point that the latest F-35 update is looking to manage the stealth jet’s power more efficiently.

But beyond the efficiency improvements that can be implemented with engine controls and software, engine manufacturers will need to develop next-generation fighter engines that generate far higher power outputs using turbos turned by their turbofan engines.

That added electrical output could also be used to power directed energy weapons, such as lasers or microwaves. The Air Force already plans to test a laser turret on an F-15 jet fighter on 2021 designed to scramble the guidance system of an incoming anti-aircraft missile. However, more powerful lasers could travel greater distances and inflict destructive thermal effects, turning them into offensive weapons with virtually unlimited ammunition.

As stealth becomes less of a trump card against savvy opponents, laser or even kinetic hard-kill active-protection systems may, in coming decades, provide a new layer of defense to warplanes that otherwise seemed to be at the mercy of increasingly long-range sensor and anti-aircraft weapons.