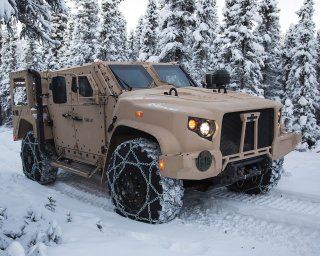 “Integrated lethality on an agile and protected vehicle like the Oshkosh JLTV is quickly filling capability gaps that exist in many international militaries,” John Lazar, Vice President and General Manager of International Programs for Oshkosh Defense, said in the release. “This past year, we’ve seen an increased interest in the Oshkosh JLTV from international customers with dynamic demonstrations and live fires across Europe with more planned for 2022.”

The continued expansion of the JLTV program demonstrates a global appetite for the blend of attributes woven into the vehicle. Since its inception, engineers and Army planners developing the vehicle sought a new platform to not only replace the Humvee as a tactical transport all-purpose vehicle, but also expand beyond Humvee’s mission set to a wider range of operations.

The JLTV was designed with an unprecedented blend of protection, payload, and performance. The Army sought a platform able to go off-road as needed, carry large amounts of troops, supplies, and ammunition, and even function as a heavily armed combat platform. While not tracked or heavily armored like a tank or infantry carrier, the JLTV has operated with anti-tank missiles, counter-drone technology, and a new generation of sensing and computing technologies. This supports the Army’s move toward more expeditionary operations, meaning an ability to rapidly deploy impactful combat power to meet urgent or emerging threats and combat demands.

Another reason why interest in the JLTV is expanding is the continued development of its combat capabilities. The JLTV is likely to be regularly upgraded with new high-speed computer processing, on-board electronics, and command and control technology. Beyond that, Oshkosh is working with several JLTV partner nations to add a new Non-Line-of-Sight (NLOS) Missile called Spike. The NLOS Spike, a missile system developed by Israel, can track and destroy drones, helicopters, low-flying fixed-wing aircraft, and even ground targets. The targeting and fire control system connecting the NLOS Spike to the JLTV includes an ability to redirect and course-correct during flight as new information arrives.

A recent NLOS Spike demonstration with Oshkosh showed that the weapon can hit targets at ranges up to thirty-two kilometers. The JLTV-integrated weapon also brings multi-domain attack possibilities as it can be fired from a land vehicle to destroy enemy ships, landing craft, or other maritime threats. On land, Spike can also be used to find, target and track enemy tanks, something which combines anti-armor attack capability with an expeditionary, deployable tactical vehicle.