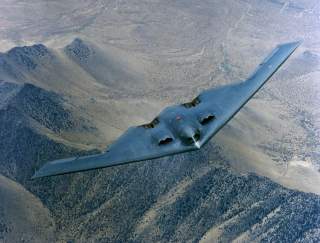 (Washington, D.C.) --The Air Force now appears to be testing components and building initial models of its new, highly-secret B-21 stealth bomber, a platform intended to hold any target at risk, anywhere in the world, at any time, for decades to come.

Despite a chorus of dialogue about the pace of technological progress underway with modern air defenses, the new bomber is said by senior Air Force leaders to include an unprecedented new generation of weapons, sensors, attack technology and stealth applications.

While, of course, the exact timing of specific stages in the development of this weapons system is understandably not available for security reasons -- the B-21 is basically a “black” program -- senior service developers are pointing to great progress with the program now that it has moved beyond critical design review into a manufacturing phase. Former Air Force Secretary, Heather Wilson, made specific reference to the aircraft’s construction in a written statement included in the United States Air Force 2018 Acquisition Annual Report. Wilson said “the B-21 program is on the right track…as it transitions from the design phase into a robust manufacturing phase that will ultimately produce our first B-21 test aircraft.”

Wilson’s reference to a first B-21 test aircraft seems quite significant and entirely consistent with the purpose of the current acquisition phase the platform is undergoing -- Engineering, Manufacturing and Design -- the point in the process where platforms are built. The program does seem to be entirely on-track given that its plan to have an operational aircraft by the mid 2020s has not changed in years. The service plans to buy at least 100 of the new bombers.

"The program completed a critical design review in November 2018 and is continuing with detailed design work," the Air Force report stated.

The Air Force Acquisition Report also contains a few other significant details. While the B-21 will, of course, be a nuclear-armed platform, the report specifies a timeline for the integration of nuclear weapons, stating that there will be “nuclear certification within two years of declaring initial operational capability,”

When it comes to nuclear weapons, it appears likely, if not certain, that the B-21 will be armed with the now-in-development Long-Range Stand-Off Weapon (LRSO). The Air Force Acquisition Report states that the LRSO is being designed to be compatible with the B-52 bomber and the B-21 Raider. Furthermore, the service report says that the Air Force will acquire 1,000 LRSOs.

The Air Force states that “initial operational capability is planned for 2030.” The program completed Systems Requirements and Systems Functional Reviews in 2018, the report states.

The Air Force has been working with industry on prototyping and design work on the nuclear-armed cruise missile, set to enter into a new Engineering and Manufacturing Development phase of construction by 2022, service officials said.

The LRSO will provide an air-launched component to the Pentagon’s current wish to expand the attack envelope possibilities for its nuclear arsenal; the NPR calls for the addition of a new low-yield submarine-launched nuclear-armed cruise missile.

A cruise missile armed with nuclear weapons could, among many things, potentially hold targets at risk which might be inaccessible to certain stealth aircraft, given the growing pace at which modern air defenses are able to detect a wider range of aircraft - to include the possibility of detecting some stealth bombers.

As a result, senior Air Force leaders say that engineering a new, modern Long-Range Standoff weapon with nuclear capability may create one of very few assets, weapons or platforms able to penetrate emerging high-tech air defenses. Such an ability is, as a result, deemed crucial to nuclear deterrence and the commensurate need to prevent major-power warfare. Some have raised the question as to whether a nuclear-armed cruise missile could lower the threshold to a nuclear engagement or, at very least, cause confusion among enemies who might mistake a conventional attack for a nuclear one. Pentagon and Air Force developers have consistently maintained that the weapon will bring an indispensable element to the US deterrence strategy.

The LRSO will be developed to replace the aging AGM-86B Air Launched Cruise Missile or ALCM, currently able to fire from a B-52. The AGM-86B has far exceeded its intended life span, having emerged in the early 1980s with a 10-year design life, Air Force statements said. Both the ALCM and LRSO are designed to fire both conventional and nuclear weapons. While Air Force officials say that the current ALCM remains safe, secure and effective, it is facing sustainment and operational challenges against evolving threats, service officials also acknowledge.