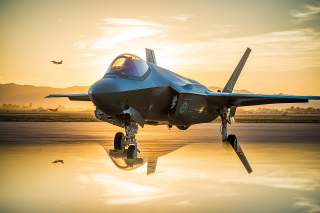 It's no secret that relations between Washington and Ankara have been on a downward trajectory for years. A recent consequence of, and contributor to, this deterioration has been Ankara's announcement in 2017 that it would purchase S-400 Triumf surface-to-air missile systems from Russia rather than a Western air defense missile such as the Patriot. Turkey has also reportedly paid a deposit for a $2.5 billion contract with Russia, with delivery to follow in October 2019.

At the same time, Turkey is set to receive at least thirty F-35A stealth fighters from the United States through 2022 and would like to acquire 120 ultimately. A ceremony held on June 21—which involved an interpretive dance by a man in a leather wing suit—officially transferred the first four F-35s to the Turkish Air Force, though the aircraft remain on U.S. soil while crew undergoes training.

However, on June 18 the U.S. Senate voted eighty-five to ten include a clause in the 2019 defense budget blocking their transfer to Turkey, despite the $175 million Turkey invested in the aircraft's development and the substantial involvement of Turkish companies in building F-35 components. (Technically, the defense authorization must still be reconciled with the version in the U.S. House, and would not come into effect until after the first F-35s are delivered.)

The senators’ grievances range from Turkey’s military campaign against Kurdish forces in Syria which Washington supports, President Erdogan’s descent into authoritarianism and persecution of political dissidents, an incident in which Turkish presidential bodyguards beat up protesters in Washington, DC. And if that weren’t enough, senators are also angry at Ankara’s increasing tendency to hold foreign nationals as political prisoners and then promise to release them in exchange for the fulfillment of arms transfers—including a U.S. citizen, the preacher Andrew Brunson.

Recently the Defense Department has indicated that if the F-35 sale could be blocked “for national security concern” even without an act from Congress—and the Pentagon’s chief motivation appears to be Turkey’s S-400 contract.

Assistant Secretary of State for European and Eurasian affairs Weiss Mitchell told reporters “an acquisition of S-400 will inevitably affect the prospects for Turkish military-industrial cooperation with the United States, including F-35s. We can’t be any clearer in saying, both privately and publicly: a decision on S-400s will qualitatively change the U.S.-Turkish relationship in a way that would be very difficult to repair.”

Not only would the purchase breach current sanctions against Russia, but if Turkey has both F-35s and S-400s, it will be in a position to test just how useful the F-35’s stealth is versus the formidable air defense weapon. And if Turkey can acquire that data, then so could Russia.

Why is Turkey interested in the S-400 and not the Patriot? The Russian system possesses greater area-denial capabilities with missiles able to strike at (slower) targets up to 250 miles away, compared to 100 miles for the Patriot PAC-2/GEM.

Furthermore, Turkey considers Greece, a fellow NATO country, to be a potential adversary due to disputes over the island of Cyprus, and perhaps trusts that S-400s would pose a more reliable threat than the Patriot. The Turks also point out that Greece operates the older, but still capable Russian-built S-300 system. Finally, Ankara’s chilling relations with both Europe and the United States make it politically desirable to diversify arms suppliers and remind NATO there could be a price for jilting Turkey—which also controls the Russian Navy’s access to the Mediterranean via the Bosporus Strait.

Of course, not only would the S-400 be incompatible with NATO systems, but any datalinks that were patched-together with S-400 batteries would be of questionable security due to Russian cyberwarfare and could compromise NATO defensive networks more broadly. Finally, it seems unlikely that Russia would sell air defense missiles to Turkey without ensuring its aircraft are protected from them—nullifying the battery’s usefulness versus NATO’s most capable potential adversary.

The F-35s entering service with the United States and several other countries supposedly have the radar cross-section of a golf ball. But that doesn’t mean they are impossible to detect.

At longer distances, large ground-based low-bandwidth radars have a decent chance of picking up an approaching stealth fighter—though they could only report its approximate position and lack the resolution to establish a target lock. Other shorter-range, platform-dependent methods for detecting stealth jets include long-range infrared and electro-optical sensors (though these can be affected by weather conditions) and electromagnetic sensors.

However, at short ranges, a stealth jet does eventually become visible on high-band targeting radars of enemy fighters or ground-based SAM batteries. While a stealth jet can detect active radar emitters from afar and attempt to avoid or shoot radar-homing missiles at them, a cunning defender could keep their radars deactivated until the stealth jet falls within range—then light them up. This tactic was the one that to shot down an F-117 stealth jet over Serbia in 1999, though complacent NATO mission planners also were implicated.

But exactly how close can an F-35 get to either type of radar before becoming visible? Although various defense ministries surely have their estimates, they’re not exactly sharing them with the public.

Obviously, data on just when and how an F-35 appears on an S-400 battery’s 96L6E “Cheeseboard” radar would be of great interest to anyone studying how to detect and shoot one down. It is already a standard practice for patrolling aircraft to practice scanning adversary ships, radars and airplanes to build a “library” of information on their radar and electromagnetic signatures. For this reason, Israel has maintained tight security around the operations of its F-35 jets to deny Syria’s air defense radars an opportunity to study their effectiveness against it.

Because Turkish F-35s would regularly operate in airspace defended by S-400s, such operational data would be collected as a matter of course. Turkey may not necessarily want to share such information with Moscow, though it would be an undeniably useful bargaining chip. However, it seems quite possible that the battery’s highly networked computers could harbor backdoors granting access to the Russian military.

Worse still, Turkey wants to link the F-35 fighter jet to its HvBS network. If S-400 computers are also connected to HvBS, they could be in a position to retrieve data collected by an F-35’s sensors. In fact, breaking into the dense stream of sensor data an F-35 is designed to transmit to friendly forces to create a fused sensor-picture would be another potential avenue for tracking the stealth jet’s activities and fatally compromising the capabilities of F-35 across Europe.

In short, the Pentagon sees the combination of S-400 batteries and F-35 fighters as one that may give Russia a chance to closely study the stealth jet, and tailor their air defenses to defeat it.

Both China and India are also acquiring S-400s, even while New Delhi is growing closer to the United States and is weighing whether to purchase F-35s as well. Meanwhile, Saudi Arabia has also hinted interest in the S-400 but received a similar warning from Washington it may be cut off from certain technology transfers if it moves towards purchasing it. Whatever happens, the stealth jet and anti-aircraft system are likely doomed to cohabit future global hotspots, even if they are not actually shooting at each other.

Ankara and Washington, meanwhile, have numerous, painful strings to pull against each other. Even if Turkey receives F-35s, Washington could cut off access to the aircraft’s ALIS cloud-based network, largely crippling the stealth fighter’s capabilities. Turkey has threatened to purchase Russian S-500 missiles and Su-57 stealth fighters if it is denied F-35s, or to kick U.S. troops out of Incirlik Airbase—which is vital to U.S. operations in Syria and hosts U.S. nuclear weapons. So far neither side appears inclined to budge.