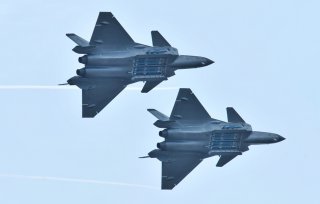 Now that it has been in existence for several years, many are likely to speculate about the merits of the Chinese fifth-generation J-20 stealth aircraft. Naturally, a key question likely to come to mind quickly may simply be: can it rival the F-22? While there may not be huge volumes of available information on the Chengdu J-20 jet, leaving much to some degree of speculation, there are a few dynamics of potential relevance to point out.

The Chengdu J-20, which has only emerged in the last five years or so, is much newer than an F-22 Raptor stealth fighter aircraft. Yet is it comparable? Chinese news reports often cite progress with the Chengdu J-20 and have at times pointed out specific efforts to match the F-22 Raptor.

What would it mean to truly rival or surpass the F-22 jet? Does this indicate that the emerging, or soon to emerge, modified J-20 engine would achieve an F-22-like “supercruise” ability to sustain Mach speeds for long periods of time without afterburners? Does it mean it can vector and maneuver in a manner somewhat analogous to an F-22 jet?

Well that may not be fully known, yet it seems there are a few things that can be observed; the J-20 fuselage, with its double-wing configuration, may be somewhat stealthy, yet it does appear larger and therefore potentially less maneuverable than a more streamlined F-22 fuselage. The F-22 Raptor has a forty-four-foot wingspan and is, at certain high altitudes, able to hit speeds as fast as Mach 2.25. The J-20 jet is several meters longer than the F-22 jet but built with a similar forty-four-foot wingspan.

A key advantage of the F-22 jet is that not only can it hit extremely high speeds, but it can also sustain them as well. Also, a slightly shorter, sleeker, and more streamlined fuselage when compared with the J-20 jet, coupled with potentially unmatched levels of propulsion, thrust, and high-speed maneuverability, could very well give the F-22 jet an advantage.  The Chinese military has also in recent years been working to upgrade the engine of its Chengdu J-20 by replacing the Russian AL-31F with its domestically-built WS-10C, according to the South China Morning Post.

Made by Lockheed Martin and Boeing, the F-22 jet uses two Pratt & Whitney F119-PW-100 turbofan engines with afterburners and two-dimensional thrust vectoring nozzles, an Air Force statement said. It is sixteen feet tall, sixty-two feet long, and weighs 43,340 pounds. Its maximum take-off weight is 83,500 and there is an ongoing and interesting discussion comparing the engine thrust of America’s F-22 and F-35 jets to China’s J-20 engine.

Weapons integration, sensor range, Electronic Warfare, and targeting are perhaps the most defining attributes likely to help distinguish which aircraft, the Chengdu J-20 or F-22 Raptor, would prevail in an air-to-air engagement or out-perform the other in combat. An ability to see, attack, out-maneuver, and destroy an enemy aircraft at further ranges and with more targeting precision and sensor fidelity would likely prove to perhaps be the most decisive factor in any combat engagement.  The F-22 jet’s ongoing 3.2b software upgrade has produced now-operational weapons upgrades to the AIM-120D and AIM-9X air-fired weapons. The enhancements greatly improve targeting precision, accuracy, guidance systems, and range for the weapons, potentially bringing as-of-yet unseen combat advantages. Some of the enhancements to the weapons, perhaps of greatest significance, include anti-jamming radio frequency technologies built to adjust frequency to sustain weapon targeting and thwart attempted jamming.

Yet another point of comparison worthy of examination can be found in the question of fleet size, meaning it may not yet be clear just how many J-20 jets China will operate? They were reported to be working toward fifty J-20 jets several years ago, however, given its well-known production capacity, China may be able to greatly exceed that. What’s relevant here is that, even if the Chengdu J-20 could compete with an F-22 Raptor, something by no means established, there may not be enough of them. The U.S. Air Force operates 186 combat-ready F-22 jets and, of course, plans more than 1,700 F-35 jets.