This Is America's New Low-Yield Nuke for Its Submarine Force 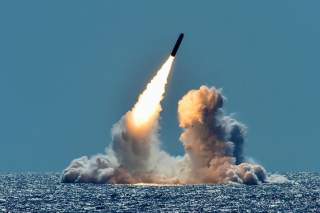 The modification effort, in the early phases of development, is in alignment with DoD’s Nuclear Posture Review (NPR) released last year by the Trump administration and Pentagon, which calls for the introduction of several new lower-yield nuclear weapons.

“The modifications to a small number of submarine-launched ballistic missile (SLBM) to provide a low-yield option and the pursuit of a modern nuclear-armed Sea-Launched Cruise Missile will provide additional diversity in platforms, range and survivability, and a valuable hedge against future nuclear “break-out” scenarios,” Pentagon spokesperson Johnny Michael told Warrior Maven.

A senior Navy official told Warrior that the modifications involve engineering a new reentry body or “warhead” for the missile.

“As it currently stands, the Trident can carry the W76-1 of W88. 'If' there was a low-yield option, it would be a third type of warhead the missile 'could' carry,” the official said.

Developers explain that new, lower-yield reentry bodies would, in keeping with the intended operational function of the Trident II D5, exist for one, singular -- yet crucial-- purpose.

“Unlike the fast attack submarine that is multi-mission, the SSBN (nuclear-armed ballistic missile submarine) has one purpose - to carry the Trident II D5. The Trident II D5 is also single purpose. While it can carry different types of reentry bodies (W76s & W88s), it has one single purpose - strategic nuclear deterrence with assured second strike capability. It’s not tactical. It’s not conventional. So its sole purpose, that is the missile, is to carry reentry bodies,” John Daniels, Public Affairs Officer for the Navy’s Strategic Systems Programs told Warrior Maven

For years, senior Navy and Pentagon leaders have discussed the “Sea Leg” of the nuclear triad intended to prevent catastrophic nuclear war. It hinges upon what might be called a paradox; weapons of massive destructive power - capable of killing millions - are engineered to “keep the peace.” In fact, an Air Force 3-Star in charge of building new ICBMs told Warrior Maven in a previous interview that, since the dawn of the nuclear era, there has not been “major” power warfare like that which the world saw in WWII.

Accordingly, this apparent contradiction defining the existence of nuclear weapons - is saving lives. The undersea portion of the overall nuclear triad - which consists of land-fired ICBMs, air-launched nuclear weapons, and sea-launched ballistic missiles -- is of key importance to ensuring a second strike. In the even that land and/or air nuclear weapons were damaged or destroyed in a catastrophic first-strike nuclear attack, sea-launched nuclear armed missiles would ensure the total destruction of the attackers. This, according to strategic deterrence strategy -- simply prevents nuclear war from ever starting.

Potential modifications to engineer a low-yield option for the Trident’s warhead, would likely be long-lasting, given the current Navy plan for the missile.

The Navy has been working with Lockheed on a Trident II D5 life-extension program aimed at ensuring the weapon can serve well into the 2040s.

A new, life-extended variant, called the Trident II D5LE, was first installed in 2017, arming the fleet with an upgraded weapon, according to a Navy fact sheet. The three-stage ballistic missile can travel a nominal range of 4,000 nautical miles and carry multiple independently targeted reentry bodies, according to Navy and Lockheed information.

In recent years, the Navy as been working with Lockheed on a number of key technical upgrades to both modernize and sustain the nuclear weapon. Some of these are ongoing, and others have made sufficient progress, laying the foundation for next-stage sustainment efforts, Navy officials told Warrior.

Hans Kristensen, Nuclear Information Project at the Federation of American Scientists, told Warrior Maven that the D5LE variant increases precision and targeting by using two stars for navigation - instead of one. “This provides more flexibility with regard to the submarine’s precise position,” Kristensen said.

Also, as mentioned by Michaels, the Pentagon’s NPR also calls for a nuclear-armed Sea-Launched Cruise Missile (SLCM). Cruise missiles can fly closer to the surface on more of a linear trajectory - and potentially operate in closer proximity to the attacking submarine. This, by design, could offer a range of lower-yield, more precise nuclear strikes - should they be ordered.

Interestingly, historians explain that the Navy’s Tomahawk missile was at one point armed with a nuclear weapon - and senior Navy leaders have specifically told Congress the service is exploring options to arm the Virginia-class attack submarines with nuclear weapons.

“The SLCM will also provide an arms control-compliant response to Russia's non-compliance with the INF Treaty, its non-strategic nuclear arsenal, and its other destabilizing behavior,” Michaels said.

Some members of Congress have raised the question as to whether the introduction of lower-yield nuclear weapons could both encourage a new arms race and lower the threshold to nuclear war. Senior Pentagon weapons developers have consistently emphasized that the plan is intended to achieve the reverse effect, and function instead as a crucial new layer of needed deterrence.

This article by Kris Osborn originally appeared in Warrior Maven in 2019.