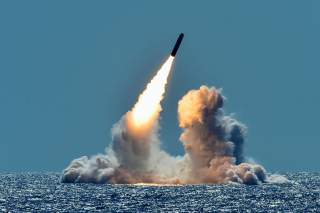 Key point: Low-yield nukes would give Washington more ways to deter its rivals, but also might raise the chance of a nuclear device being used.

Just last month, in light of the upcoming House-Senate debate on U.S. nuclear modernization, Sen. Elizabeth Warren along with seventeen Democratic Senators wrote to the Senate Armed Services Committee urging support for three nuclear initiatives that were adopted in the House defense bill.  Specifically, the initiatives (1) express the sense of Congress that the United States seeks to extend the New START Treaty with Russia, (2) deny funding for new INF-type missiles "until diplomatic and strategic planning steps are taken", and (3) prohibit deployment of a lower-yield warhead for the Trident D-5 submarine-launched ballistic missile (SLBM).

We too disagree on the first initiative, and we find the second vague.  Neither of us, however, can support the third. A lower-yield warhead for Trident is one of two modest changes to longstanding U.S. nuclear posture reflected in the 2018 Nuclear Posture Review.  By lower-yield is meant explosive force in the range of a few kilotons, not insignificant by any means but a factor of twenty and more below that of today’s SLBM warheads. This warhead could be fielded relatively quickly, with a small, very low-cost modification to an existing warhead (i.e., the current W76 SLBM warhead) and do so without requiring underground nuclear tests or adding to the size of our stockpile.

The Warren letter argues that the launch of a single, low-yield warhead, presumably in response to Russia’s limited first use in regional conflict, would enable Russia to locate and destroy the submarine and its remaining missiles, which are a critical part of assured, survivable, forces able to retaliate against a much more massive attack.  This argument ignores the facts. For decades, the U.S. has had pre-planned limited strike options including the possibility of a so-called split launch, that is, a few now with the threat of more later from a single submarine. The U.S. Navy practices this tactic—shoot-evade-shoot again—as a matter of course. We can safely assume that it has evaluated this risk and deemed it manageable in light of the demanding capabilities required for Russia to achieve a prompt destruct capability against U.S. submarines.

The Warren letter also argues that a low-yield Trident warhead is dangerous in that it will lower the U.S. nuclear use threshold making nuclear war somehow less terrible, and hence nuclear war more likely.  This assertion has no empirical basis. Since the 1950s, the U.S. stockpile has had thousands more of the so-called tactical warheads than we have today, many with much lower yields. Such warheads were deployed at the height of the Cold War but never used in any conflict.  There is no evidence that the simple possession of these weapons made nuclear use by the United States more likely. As former Secretary of Defense Mattis has stated:

Why do we support the decision to field a lower-yield Trident warhead?  Most significantly, it results from substantial changes in Russia’s behavior since the 2010 nuclear review carried out by President Obama and his team.  These changes include, most notably, Russia’s open contempt for the post-Cold War security order, its illegal occupation of Crimea and ongoing war with Ukraine, its nuclear threats to U.S. allies, its deployment of a land-based cruise missile in abject violation of the INF Treaty, the surging role of nuclear weapons in Russia’s security posture, their increased prominence in military operations, and the concern that a limited-first use, “escalate to win” nuclear employment strategy has gained prominence in Russia’s nuclear doctrine.

On this last point, consider the following scenario.  Mr. Putin launches a conventional strike against NATO to occupy the Baltic States and return them to Russian rule.  Because of an initial conventional mismatch, Russian forces establish a significant Baltic presence in the first week.  Meanwhile, NATO is mobilizing to reverse this “fait accompli” with U.S. conventional air, sea and ground forces on their way to reinforce the continent.  Putin orders use of one or two low yield weapons in Europe to coerce allies (and allied publics) to cease mobilization and thus preserve the status quo. In taking this step, Putin may well believe that the United States would not respond with strategic warheads that could cause significant collateral damage

If, as reflected in recent doctrine, military exercises, and aggressive modernization programs for tactical nuclear weapons, Russia’s leaders believe that Moscow could conceivably engage in limited nuclear first-use without undue risk, then the U.S. must work to dispel such dangerous and destabilizing notions.  Yes, the U.S. has low-yield warheads that could be delivered by aircraft, but not with the assured level of penetration to defenses provided by ballistic missiles. We believe that an SLBM-delivered low-yield warhead option should be available to national leadership specifically to bolster deterrence of Russian limited first-use.

The rationale for a lower-yield Trident option is to raise Russia’s nuclear use threshold, not lower ours.  It is not to more readily fight a nuclear war but to deter one. It does so by helping to convey a credible message that no security benefit at all, only complete and unacceptable downside consequences, would result from any use of nuclear weapons.  That is the essence of deterrence.