America's Patriot Missiles Are a Real Threat to North Korea 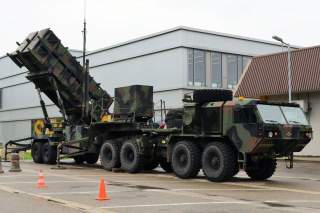 While the Army has of course been upgrading its Patriot missile for quite some time, the enhanced target range and accuracy of these most recent versions seem quite relevant to a pressing need to bolster South Korean ballistic missile defenses in light of the threat of attack from North Korea.

The recent test marked the latest development in a series of radar and targeting upgrades to the Patriot missile designed to increase the range of threats it can destroy -- to include more of drones, rotary wing aircraft, cruise missiles, extended range tactical ballistic missiles and high-speed aircraft. Army efforts to upgrade the radar, fire control technology and flight software for the PATRIOT missile  are, among other things, designed to sharpen its target tracking ability against approaching enemy attacks.

"Our Patriot modernization effort reduces the size of the hardware on the weapon and gets the latest RAM, faster processing speed, smaller motherboards and improved command and control," Rasch said.

The upgrade includes the addition of new technology designed to keep pace with fast-emerging threats well above and beyond the tactical ballistic missiles for which the weapon was initially designed, developers explained.

The missile system also functions in tandem with the Terminal High Altitude Air Defense, THAAD, system to provide the U.S. with a “multi-tier theater defense,” Rasch explained, adding that this integration has taken place in South Korea.

To intercept an incoming missile, the PATRIOT steers towards a predetermined intercept point chosen by its ground-based fire solution computer, selects the proper trajectory, and then applies a direct, body-to-body hit on the target.

In service since the early 80s, PATRIOT missiles have been upgraded several times, including this latest MSE software improvement. Recent tests have been designed to asses an even newer target-tracking technology called Post Deployment Build, or PDB-8, service officials explained.