America's Powerful Tomahawk Cruise Missile Is Getting a New Upgrade 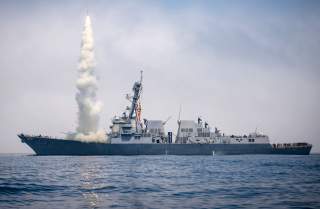 PATUXENT RIVER NAS, Md. – Smart munitions experts at the Raytheon Co. are moving forward with a U.S. Navy program to retrofit the venerable Block IV Tactical Tomahawk missile for the anti-ship role with a new sensor system to enable the weapon to attack moving enemy vessels at sea.

The order calls for Raytheon to update technical data package of the guidance test set, and upgrade existing units to support the MST additions -- including hardware and software.

The Maritime Strike Tomahawk program is planned for initial operational capability in 2022, with procurement of upgrade kits continuing into 2023. Raytheon has been sole Tactical Tomahawk missile producer since 1994.

The Tactical Tomahawk missile has unique flight, launch, and information-processing capabilities that a seeker modification could help meet these needs affordably, officials say. Raytheon can integrate a new sensor suite into the Tactical Tomahawk quickly, and is the only known source with the technical knowledge to update the missile quickly enough for rapid delivery to the Fleet.

Since 2012 Raytheon has spent about $55 million of its own money for studies, mock-ups, and engineering analysis to find a Tomahawk missile seeker solution with the limited space available inside the missile to accommodate seekers, ancillary equipment and the processor.

For the Maritime Strike Tomahawk, Raytheon is proposing a seeker, processor, software, and a new inertial measuring unit for terminal maneuvers. Raytheon also is redesigning the system’s power budget and system cooling.