America's Stealth Destroyers Are Experimenting on How to Fight Alongside Drones 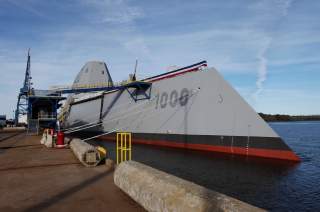 Key point: Washington isn't sure what to do with its stealth destroyers so it might as well have them experiment. The Navy is hoping to use these ships along with others and drones to figure out how all these advanced weapons might work together in a real war.