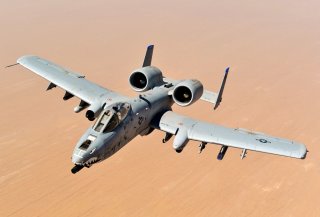 Key point: The troops feel strongly that nothing is more important than a pilot dedicated to expertise in close support.

Many Air Force senior officers contend that close air support (CAS) can be done by any platform that can launch a guided weapon at a set of target coordinates.

Troops who've needed and received close support in combat know how dangerous it is to think of targets as nothing but GPS coordinates. They found out the hard way that their high priority threats are hard to detect, even harder to distinguish from friendlies, and prone to shift rapidly from moment to moment. That's why they feel so strongly that nothing is more important than a pilot dedicated to expertise in close support—and why they have such strong preferences for the A-10 over any other platform. The results of a survey of 500 combat-experienced Joint Tactical Air Controllers and Joint Fire Observers say it all: 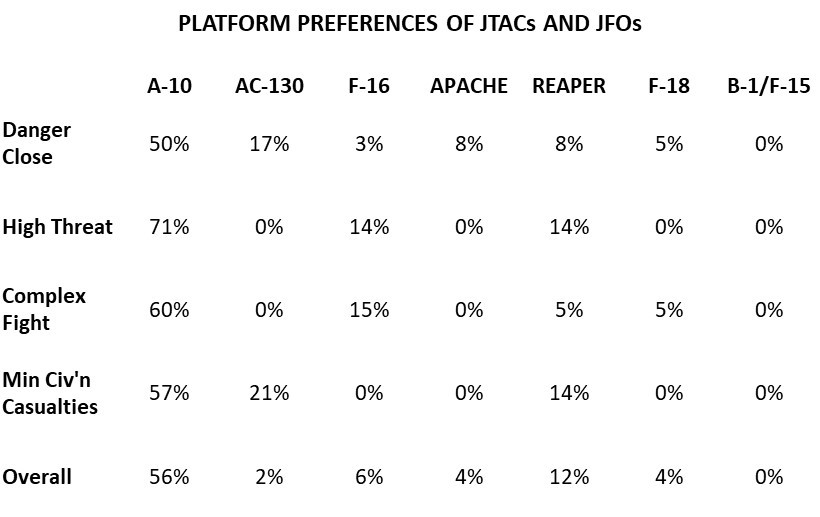 Almost all the ground controllers and observers surveyed agreed that the pilot's training and understanding of ground combat is more important than any other factor. But they had strong preferences in platforms. In a high threat environment with lots of air defense, they preferred the A-10 over any competing platform by 5:1—and across all scenarios, by 4.7:1. As the survey's authors put it: “The bottom line is that when ground troops were told their lives were in danger, they strongly preferred the A-10—so much so that they felt it was necessary to write it into the survey.”

The reasons for these strong A-10 preferences are not hard to fathom. When the enemy is hidden, close and dangerous and/or the weather is bad, other platforms—especially fast movers—simply can't get in close enough and survive long enough to deliver accurate firepower on the right targets.

When production ended in 1984, the Air Force had 707 A-10s. Immediately after the Warthog's brilliant 1992 performance in Desert Storm, the Air Force generals cut the fleet in half. They wanted the money to help buy new, ultra-expensive systems like B-1s and B-2s. And the brass have continued salami-slicing the A-10 force ever since. We are now down to 281 A-10s—and we would be well on our way to zero A-10s if the recent four-year campaign by Air Force Headquarters to shut down all A-10s had succeeded. Fortunately, the Congress refused to go along, mandating instead that the Air Force fully support the current 281 Warthogs. But in the proposed FY 21 budget, the USAF's leadership is back to salami-slicing the force by another 44 A-10s to help pay for the new big-ticket items they deem more important than winning ground battles and saving the lives of the troops. Even worse, their multi-year budget plan is to cut the current 9 operational A-10 squadrons down to 7. That means, quite simply, the Air Force thinks it's not important to have enough deployable units to provide year-round dedicated close support to our deployed troops.

During the upcoming National Defense Authorization Act (NDAA) hearings, Congress will have the opportunity to remind the Air Force that not only is it unacceptable to deny A-10s to our troops, it is also illegal. In the 2016 NDAA, Congress mandated that the USAF may not divest any A-10s unless they could prove by operational test that the F-35 was as good or better at delivering close support. It was a great moment for Congress and hammered home the crucial importance of their defense oversight responsibilities. But the need for that same Congressional oversight is urgent, once again.

The Air Force's response to that 2016 mandate was a very brief, pro forma pair of week-long F-35 versus A-10 flyoff tests in 2017 and 2018, deliberately designed and managed without any participation by the experienced operational test community. Despite poor test management, inadequate number of test sorties, test scenarios designed to favor the F-35 and antiquated, far-too-easily detected targets, multiple inside sources confirm that the A-10 achieved far better results against both lightly and heavily defended targets. The test report to Congress was due December, 2019. The spin the Air Force puts on their test results—and the way they testify in the FY21 NDAA hearings—will speak volumes about their integrity and their willingness to protect American troops. To move on from their recent embarrassing campaign to kill their most combat-effective and affordable close support platform, the Air Force needs to act to fully supply, maintain and overhaul for life extension all 281 of its Warthogs.

When American troops lay their lives on the line in combat, they expect that their country will give them the best available support and protection. We can do no less than give them the close air support platform they know they need.