Amtrak Says It Is Finally Making A Profit, But More Bad News Is Coming 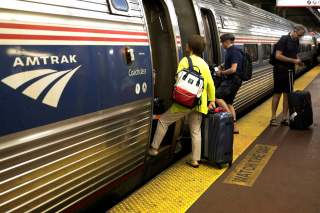 A press release issued by Amtrak last week would, if it were published by publicly traded firm, be a violation of securities laws and regulations. The press release claimed that Amtrak's FY 2019 annual financial report, which has yet to be published, would show that passenger revenues covered 99 percent of operating costs. Amtrak officials further projected that the company would show a profit for the first time in its history in 2020.

Last week's press release and other of Amtrak's public statements pretend that depreciation doesn't count. Yet depreciation is more than just a tax deduction: it is an actual measure of the wear-and-tear on infrastructure and equipment that must eventually be replaced.

The second problem is that Amtrak counts more than $225 million in tax subsidies from 18 states as "passenger revenues." The vast majority of taxpayers who pay these subsidies never ride Amtrak trains, so they can hardly be considered passenger revenues.

Between these two misrepresentations, Amtrak's losses in 2019 were more than a billion dollars greater than Amtrak claims. Unfortunately, there are no government agencies watchdogging Amtrak the way the Securities & Exchange Commission monitors publicly traded firms.

Of course, Amtrak isn't attempting to defraud private investors -- it doesn't have any. Instead, it is attempting to delude elected officials and other members of the public into supporting more subsidies for Amtrak. Amtrak will admit that it needs capital subsidies, it just doesn't want to admit that actual passenger revenues are insufficient to pay to maintain the infrastructure paid for with those subsidies.

In fact, Amtrak has at least a $33 billion maintenance backlog of basic infrastructure. That doesn't count the fact that passenger cars operated by Amtrak, which have an expected service life of 25 years, average more than 30 years old, the most in Amtrak's history. Replacing the older cars in its fleet will cost at least another $4 billion.

The bottom line is that Amtrak is a huge money pit for the very good reason that passenger rail is much more expensive than other forms of travel. Amtrak fares average twice as much, per passenger mile, as average air fares, and when all subsidies are counted, it costs four times as much to move someone a mile by Amtrak as it does by airline. The tendency of Amtrak officials to commit fraud to promote their program is just one more reason to end those subsidies. For more information about Amtrak's fraud, see my policy brief published today.

This article by Randal O'Toole first appeared at the Cato Institute.