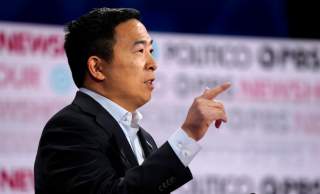 Democratic candidates were asked why their party has been unable to convince a “strong majority of Americans to support impeachment.” The moderator also asked how the candidates would “persuade more Americans that” impeachment is “right.”

Yang blamed the media for Americans being split on impeachment, saying the country does not trust the media. He also criticized networks for being untruthful about why Trump was elected in the first place.

“The media networks didn’t do us any favors by missing a reason why Donald Trump became our president in the first place,” Yang said during Thursday’s debate. “If you turn on cable network news today, you would think he’s our president because of some combination of Russia, racism, Facebook, Hillary Clinton and emails all mixed together.”

“But Americans around the country know different.”

The entrepreneur continued on to talk about manufacturing jobs, noting America “blasted away” millions of jobs based in various states around the country. He added that the country gets its news from different networks, and none of the news is the same.

“The more we act like Donald Trump is the cause of all of our problems, the more Americans lose trust that we can actually see what’s going on in our communities and solve those problems,” Yang said.

This question came just one day after the House voted to impeach President Donald Trump on Wednesday evening, with zero Republicans voting yes.