Andrew Yang: The Next Mayor of New York City? 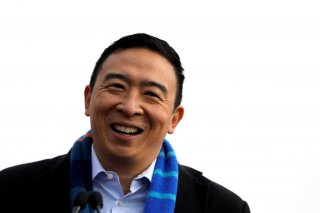 After dropping out of the Democratic presidential race in February, Andrew Yang decided to skip Washington politics and head for a smaller crowd—New York City.

Some New Yorkers, however, are displeased.

During the last few months, Yang spent time on the Senate campaign trail in Georgia in hopes that his efforts would help Democrats regain control of the upper chamber. He has also pushed lawmakers on Capitol Hill to swiftly pass coronavirus relief and debated President Joe Biden’s potential Cabinet picks.

But when it comes to New York City politics, his efforts are nearly still.

The supposed New Yorker brewed steam during his run for the presidency in 2020, where he unexpectedly gained much traction and support in his bid, primarily for his signature stance of a universal basic income. Yang has also built a massive online fan base for his “quirky” approach to politics, an unorthodox method that’s placed him ahead of his mayoral competitors by double-digits in a spate of polls.

Yang suddenly turned to the mayoral race after the November election, after primarily focusing on politics on getting Biden into the Oval Office.

But Yang’s candidacy “would offer a clear test of whether New Yorkers want a splashy but inexperienced contender with bold ideas for navigating the city’s recovery, or whether a mood of citywide emergency propels a more familiar local figure with a traditional governing background,” Katie Glueck, a reporter for the New York Times, wrote.

As a former presidential candidate, Yang established a national network of lawmakers—an asset that his fellow competitors do not have. Vice President Kamala Harris rang Yang on Thanksgiving. Transportation secretary nominee and former Democratic presidential candidate Pete Buttigieg talks to him on a regular basis. Sen. Jon Ossoff (D-Ga.), the newly elected congressman that helped Democrats pull off a trio of power on the Hill, reportedly called Yang to offer him good luck in the mayoral endeavor. His relationship with critical Washington players would prove strong for the city, as it boils in financial and poverty crises with a dire need for federal help.

“I got along with Bernie well. You know who is actually really easy to get along with? Joe Biden. Even before Andrew Yang was a thing, Joe was always very gracious,” Yang told Rep. Ritchie Torres (D-N.Y.) on a walk through the congressman’s district in the South Bronx.

Yang uses his weapon of contacts as part of his pitch for the job, but the push on his involvement in Washington politics has neglected his drive in city-related politics and issues.

“If someone’s looking for a candidate who has spent the last couple decades steeped in city government, like, I will likely not be their candidate,” Yang said in an interview earlier this month from his home in New Paltz, N.Y., roughly eighty miles outside Manhattan.

When asked what he can bring to New York and how he’s worked to understand the unprecedented obstacles that Manhattan has faced, especially during the coronavirus crisis, Yang responded by outlining how his family endured the hardships of the statewide lockdown.

But Politico reported that he actually dodged Manhattan when infections surged across the state, and instead, spent time on Biden’s campaign run, hitting Georgia and Pennsylvania, and also escaped to his isolated second home in upstate New York.

His comments received a swirl of criticism. Social media users blasted him for not understanding one of the basic struggles that millions of Americans have faced, especially being unemployed and sustaining a family during an economic downturn.

“Anyone who is not perceived as a ‘real New Yorker’ will not be considered a real candidate,” Leslie D. Feldman, a political science professor at Hofstra University, said. “Yang is considered more of a ‘national candidate’ and his ‘escape’ to upstate NY during the height of the pandemic has been publicized in the news as more evidence of his ‘non-New Yorker’ status.”

Yang has proposed a slew of ideas that aims to revamp the city after experiencing several crises due to the impacts of the pandemic, including the basic income initiative, broadband internet access and the creation of a “people’s bank of New York” that would help residents who are battling financially and unable to make ends meet.

Local lawmakers and operatives, however, seem hesitant to support such policies, citing Yang’s lack of understanding of city needs and absence in New York politics.

“Local politics is extremely local in NYC and it isn’t clear that Yang has a great handle on how things work here,” Seth Barron, associate editor of City Journal and project director of the NYC Initiative at the Manhattan Institute, said. “He wants gambling on Governors Island even though that is specifically banned and would require an act of Congress. His modified [universal basic income], which would be means-tested, is just a return to cash welfare, which was a disaster and a poverty trap.”

Feldman also questioned Yang’s universal basic income position, saying “Andrew Yang’s ‘guaranteed income’ is problematic and may be perceived by voters as ‘more socialism’ and they can see how socialism has affected New York City to the point of collapse.” Feldman added that “guaranteed income” would only make residents more dependent on the government to provide financial assistance to families, thereby handing a considerable amount of power to the entity.

“No elected official in the country has done more to shine a spotlight on the need for a basic income than Andrew Yang,” Torres said, noting that he’s considering endorsing the former presidential candidate.

Yang is also the only mayoral contender with a massive social media presence, posting on TikTok and Twitter to reach a spate of young followers and encourage them to back his bid. He predominantly uses online campaigning to boast his candidacy, but experts seem skeptical that this method would attract the 3.2 million registered Democrats in the town, considering most young voters don’t participate in local politics.

“Use of social media might seem like an advantage, but younger people . . . use it and that demographic does not have a pattern of consistently voting,” Feldman said.

“He does have a base of active supporters who spend a lot of time on social media, and they may drum up a lot of noise, though of course, it may all be within a kind of echo chamber,” Barron said. “The typical triple-prime Democrat in NYC however is not necessarily a big social media user,” noting that classic New York Democrats “have been following local politics for decades and know who the mainstream players are.”

In the meantime, New Yorkers who plan on voting at the local level must balance whether they want a candidate with a strong national presence and a sheer priority for Washington politics, or someone who understands traditional New York needs.

“The 2020 campaign seasoned him to a certain extent but it's not clear that he can gear down to the nuts and bolts of municipal policy. But he certainly cannot be written off,” Barron said.