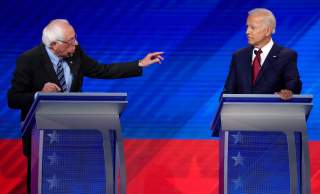 The Vermont senator defended Medicare for all to former Vice President Joe Biden, a defense that included the word “damn.”

“That’s right, Joe,” Sanders said. “Status quo over ten years will be $50 trillion. Every study done shows that Medicare for all is the most cost-effective approach to providing health care to every man, woman and child in this country.”

“I wrote the damn bill, if I may say so,” Sanders added.

ABC News warned candidates on Thursday ahead of the debates that swearing would not be tolerated.

“We wanted to take this opportunity to remind you that, as the debate will air on the ABC broadcast network, we are governed by Federal Communication Commission indecency rules,” an ABC News memo states.

“We will not be broadcasting on any delay, so there will be no opportunity to edit out foul language.”

The warning follows 2020 presidential candidate Beto O’Rourke’s statement following the El Paso shootings during an interview with CNN, “Yes, this is fucked up.”

“We’re averaging about 300 mass shootings a year,” O’Rourke said. “So yes, this is fucked up. If we don’t call it out for what it is, if we’re not able to speak clearly, if we’re not able to act decisively, we’ll continue to have this kind of bloodshed in America. And I cannot accept that.”