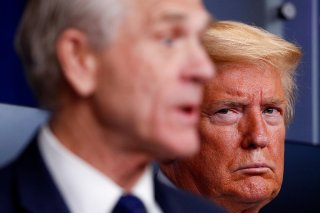 As the number of unemployed people in the United States passes ten million, Congress is eyeing the possibility of another stimulus package. The previous one passed a week ago, was one of the most expensive single bills in U.S. history, totaling $2.3 trillion. As the economy continues to fall apart amidst the coronavirus-enforced business shutdowns, the federal government wants to remain active with new legislation.

While Senate Republican leadership remains skeptical of the utility of a fourth stage of the relief process at this time, Speaker of the House Nancy Pelosi and Treasury Secretary Steven Mnuchin are already in preliminary discussions about what the framework of a possible bill might look like.

First on the policy wish list, for both congressional Democrats and President Donald Trump, would be a massive infrastructure plan. The demand for infrastructure spending and revitalization has been a bipartisan consensus since Trump took office. “It is crumbling. You look at our airports, hospitals, roads, and highways, the bridges are falling down. You look at our schools. Our country is falling apart. We have become Third World in many respects,” then-candidate Trump said in 2016.

But despite this apparent agreement between Democrats and the administration, “infrastructure weeks” have come and gone over the past three years with no bills being crafted. But now that Senator Richard Shelby, Chair of the Senate Appropriations Committee, has said that he supports up to a trillion-dollar infrastructure bill in response to the coronavirus, the ball may finally be rolling.

Something else members want to see in a new stimulus is more cash payments. The previous gave $1,200 checks to individuals who earned $75,000 or less, $2,400 for couples who made $150,000 or less, and an extra $500 per child under the age of 18. While intended to be a one-time payment, predictions about the length of the crisis have increased. This would necessitate another payment to people whose employment has been affected by the government’s closure of businesses.

Other ideas include more benefits for medical workers and those whose jobs have been deemed “necessary” during the pandemic. “I am urging President Trump to give all of the federal front-line workers hazard pay, and I would think a very important thing in our next bill is to require hazard pay for all of the front-line workers,” said Senate Minority Leader Chuck Schumer.

Besides these new or extended policies, some members of congress think a fourth bill’s primary purpose should be to fix the third bill. “I think phase four needs to first of all be focused on what we find are the shortcomings in phase three. There had to be some,” said Senator Roy Blunt of Missouri. “There was no way we could put a package together that quickly, though we needed to put it together that quickly, and have not left some gaps. And we need to fill those gaps.”