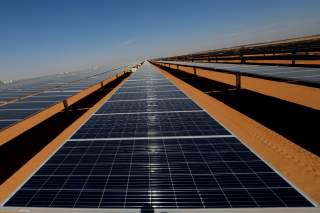 Looks like another federally backed solar energy plant has gone bust. Bloomberg News reports, “A $1 Billion Solar Plant Was Obsolete Before It Ever Went Online.”

In 2011 the $1 billion [Crescent Dunes] project was to be the biggest solar plant of its kind, and it looked like the future of renewable power. Citigroup Inc. and other financiers invested $140 million with its developer, SolarReserve Inc. Steven Chu, the U.S. Department of Energy secretary at the time, offered the company [$737 million in] government loan guarantees, and Harry Reid, then the Senate majority leader and senior senator from Nevada, cleared the way for the company to build on public land.

The state of Nevada chipped in another $119.3 million tax abatements over 20 years. But, Chris Martin and Nic Querolo write at Bloomberg,

By the time the plant opened in 2015, the increased efficiency of cheap solar panels had already surpassed its technology, and today it’s obsolete — the latest panels can pump out power at a fraction of the cost for decades with just an occasional hosing‐​down.…

The plant’s technology was designed to generate enough power night and day to supply a city the size of nearby Sparks, Nev. (population 100,000), but it never came close. Its power cost NV about $135 per megawatt‐​hour, compared with less than $30 per MWh today at a new Nevada photovoltaic solar farm, according to BloombergNEF, which researches fossil fuel alternatives.

It all reminds me of another giant taxpayer‐​funded failure of the Obama administration’s green‐​energy enthusiasm, Solyndra. Visiting the Solyndra solar‐​panel factory in Fremont, California, in May 2010, President Obama declared, “The true engine of economic growth will always be companies like Solyndra.” But despite $535 million in federal loan guarantees, Solyndra declared bankruptcy 16 months later.

Plenty of people in and around the Obama administration genuinely believed that fossil fuels were dangerous and unsustainable. But as I wrote in 2018 in American Consequences magazine,

when governments pick winners, politics usually rears its ugly head. Official investigations and reporters dug into the story and found that, as the Washington Post reported, “Obama’s green‐​technology program was infused with politics at every level… Political considerations were raised repeatedly by company investors, Department of Energy bureaucrats and White House officials.”

The family funds of Oklahoma billionaire George Kaiser, a big Obama fundraiser, owned a third of Solyndra. As the company was failing, Kaiser wrote to a Solyndra board member, “Why don’t you pursue your contacts with the WH?” Two months later the board member wrote Kaiser, “The DOE really thinks politically before it thinks economically.” Solyndra’s lobbyists met at least three times with an aide to top White House official Valerie Jarrett.

Government subsidies can bring any business into existence. But apparently even subsidies can’t ensure the production of something useful.

This article by David Boaz first appeared at the Cato Institute.