AOC Wants to Launch a New War on Poverty 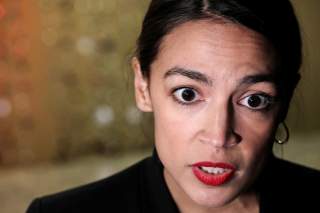 Rep. Alexandria Ocasio-Cortez (D-NY) yesterday released the text of various bills designed to make America, in her terms, “a just society.” One bill, the “Recognizing Poverty Act,” pursues that goal by effectively increasing the number of Americans officially counted as poor. The bill directs federal bureaucrats to establish a new “up-to-date adequate family income level,” i.e. “poverty line.” The legislation defines the new poverty line as “an amount equal to the income that would be sufficient to make ends meet.” Whatever that means, the amount would include “expenditures on food, clothing, shelter, utilities” along with “new necessities such as internet” and “other needs identified.” In case that leaves any doubt, the legislation notes “the poverty line proposed under this subsection shall not be less than the poverty line” in effect today. Presto — the number of “poor” would have to go up. As under AOC’s proposed $94 trillion Green New Deal, you can be sure more federal benefits would soon follow for the newly poor as well as the currently poor, even those “unwilling to work.”

One of the many ironies of this legislation is the fact that the current “official poverty measure” ignores the bulk of federal spending designed to alleviate poverty. That overestimates the number of Americans who today are counted as poor by ignoring the tens of billions of dollars in benefits millions of families receive specifically to supplement their low incomes. AOC’s bill does nothing to correct that flaw, and instead heads in the opposite direction by hiking the poverty line, which, as her office notes, determines eligibility for much of the social safety net including “Medicaid, Food Stamps, Family Planning Services, the Children’s Health Insurance Program (CHIP), and the National School Lunch Program.”

How high might the new poverty line go and how many people could fall below it? Her bill doesn’t say. But in setting the new poverty line her legislation directs federal bureaucrats to consider, among other criteria, “the Self Sufficiency Standards initially developed by Diana Pearce and Wider Opportunities for Women.” Such “self-sufficiency standards” are billed as “an alternative to the official poverty measure.” A 2018 report about the self-sufficiency standard in AOC’s home of New York City notes “For a Bronx family of three, this minimum is about $76,000, which is almost four times the official poverty measure ($20,780).” The report adds “Two out of five New York City households … have incomes below the Standard, while only 14% fall below official poverty thresholds.” And the gap is not just a big city thing where the cost of living is comparatively high. In rural South Carolina, for example, a 2016 report found the self-sufficiency standard ranged from 166% to 244% of the federal poverty level, depending on the county.

So if it tracks the self-sufficiency standard, the new AOC poverty line might go well up the income ladder and in some places could more than double the number of people “in poverty.” In some parts of the country, that new poverty line might even exceed the US median household income of $63,179 in 2018. That could designate even some average Americans as officially poor while opening up the door to billions more in welfare and related spending.

This article originally appeared at the American Enterprise Institute.