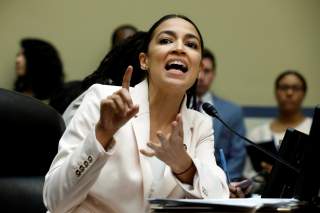 The “Green New Deal” will fail for many reasons. One is that the people pushing it seem oblivious to the needs of poor and minorities families, who would be directly hurt by the plan.

By one estimate, that Green New Deal would cost $600,000 per household and eliminate the use of all fossil fuels in just 10 years. It would result in higher energy prices for all Americans, but would disproportionately hurt people of color and other minorities who are the most susceptible to energy poverty.

Energy poverty occurs when households are unable to afford their basic electric and heating needs due to high energy prices.

Yes, we need to protect the environment. But unrealistic proposals like the Green New Deal only contribute to energy poverty and won’t work for low-income families.

We need an energy approach that makes better use of what we have, especially if it can keep costs low and create jobs.

One of the answers is natural gas. Natural gas is abundant and affordable compared to most forms of energy, and it burns cleaner than other fossil fuels. In fact, shifting to gas-fired plant generators was the single greatest factor in the United States achieving a 28 percent reduction in CO2 emissions since 2005, according to the Energy Information Administration.

When temperatures dropped to the teens and single-digits, demand exceeded supply and forced prices to skyrocket. There’s simply no excuse for forcing low-income African-Americans and other minorities to choose between heating a home and putting food on the table.

These pipeline shortages are bad enough, but they are made worse by the same activists who claim social justice in supporting the Green New Deal.

Where’s the social justice and compassion in blatantly opposing affordable, traditional energy resources that are becoming cleaner and more efficient every year?

Recently, I saw some of these “keep it in the ground” people in economically depressed Buckingham County, Virginia, protesting the construction of the Atlantic Coast Pipeline, where a pipeline compressor would create jobs and up to $1 million in tax revenues. That’s a desperately needed economic jolt to a county where every third person is African-American.

But the activists, with their bullhorns, T-shirts, and protest signs, ignored the potential benefits of this project and claimed to be fighting “environmental racism” by opposing the pipeline compressor. All of the protestors were white.

The Atlantic Coast Pipeline could save consumers in Virginia and North Carolina more than $377 million in electricity bills annually—states with disproportionately high black populations.

How a pipeline that would make life more affordable and create more prosperity is racist is beyond my comprehension. Sadly, the only environmental racism I see is actually “green energy discrimination” foisted upon minority households, who can least afford higher energy costs.

I’m all for renewable energy where it makes sense and where it doesn’t needlessly drive up our cost of living. If electric cars are attractive to consumers, let them compete in a free market without the help of government subsidies—our tax dollars.

The working poor and middle class need to rely on affordable energy, and no one should be vilified for using a fuel-efficient gasoline engine to get to work. That’s ridiculous.

There is a practical, realistic path forward when it comes to modernizing our national infrastructure and pipeline grid. We can do it while improving energy efficiency and lowering greenhouse gas emissions.

But the Green New Deal, with its $93 trillion price tag, isn’t any viable plan at all. It’s a pipe dream—a bad deal for America.