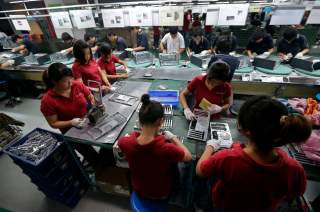 One temporary worker jumped to his death from a Zhengzhou Foxconn factory dormitory in 2018 reportedly because he did not receive his bonus, The South China Morning Post reported.

The report found that Apple’s Foxconn factory in Zhengzhou, China — the largest iPhone factory in the world — violated China’s rule that bars temporary workers from exceeding 10% of a factory’s total workforce.

The company’s temporary workers, otherwise known as “dispatch workers,” made up about 50% of its workforce in August to “manage the influx of orders during peak season” as Apple produces its latest line of iPhones.

Apple and manufacturing partner Foxconn broke a labor law in China to build their latest iPhones, the companies confirm after a @chinalaborwatch report was published.

Additionally, the study found that the factory’s base wage, $295, was “insufficient” for a family living in Zhengzhou, and its social insurance contributions fell short of China’s labor requirements. CLW also noted that many workers said they never received bonuses they were promised for agreeing to work “for a certain period of time.”

One temporary worker jumped to his death from a Zhengzhou Foxconn factory dormitory in 2018 reportedly because he did not receive his bonus, The South China Morning Post reported.

Apple responded to the report in a Monday statement, saying “most of the allegations” in the CLW report “are false.”

“We did find during our investigation that the percentage of dispatch workers exceeded our standards and we are working closely with Foxconn to resolve this issue,” according to the South China Morning Post.

“We looked into the claims by China Labour Watch and most of the allegations are false. We have confirmed all workers are being compensated appropriately, including any overtime wages and bonuses, all overtime work was voluntary and there was no evidence of forced labor,” it added.

Apple confirmed it will launch its iPhone 11 model on Sept. 10 for a start price of around $1,2000, according to The Inquirer.