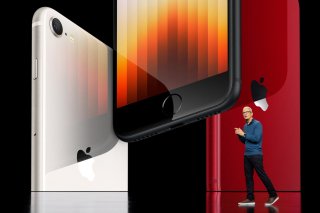 Apple on Tuesday held its latest keynote event, titled “Peek Performance.” While the company announced a new Mac Studio and Studio Display, M1 Ultra chip, a new iPad Air, and a deal to stream Major League Baseball games on Friday nights, the main piece of news at the event was the latest iPhone announcement.

In addition to new green finishes for the iPhone 13 lineup, Apple announced the arrival of a new iPhone SE. It’s the third edition of the company’s budget version of the iPhone and the first new one since 2020. The new iPhone SE features 5G capability, improved battery life, and the A15 Bionic chip. It comes in three colors—midnight, starlight, and (PRODUCT) RED.

“iPhone SE has been an incredibly popular choice with our existing users and for new iPhone customers, thanks to its iconic design, exceptional performance, and affordable price,” Kaiann Drance, Apple’s vice president of Worldwide iPhone Product Marketing, said in the company’s announcement. “And with 5G, iPhone SE gives users faster downloads and uploads, higher quality video streaming, real-time interactivity in apps, and much more.”

The new iPhone SE will have a starting price of $429, slightly more than the last iPhone SE but still less than the other available iPhones. The 2022 iPhone SE is available for preorder on Friday and will hit stores beginning March 18.

The new iPad announced by Apple on Tuesday is the iPad Air, which features the M1 chip and 5G on its cellular models. Apple describes it as “a Massive Leap in Performance” for the iPad Airs. Like the new iPhone, the iPad Air will be available for preorder on March 11 and in stores a week later.

Further, Apple announced its deal with Major League Baseball to stream a pair of games nationally each Friday night during the regular season on Apple TV+. The broadcasts, exclusive to Apple and produced by Major League Baseball, represent the company’s long-awaited first-ever foray into live sports rights. The games will begin once the current Major League Baseball labor dispute ends. Apple is reportedly also bidding to take over the NFL Sunday Ticket package.

“With the A15 chip this smartphone will be the fastest and most powerful phone at these price points by a wide margin and we believe based on our initial supply chain checks should translate into 30 million+ iPhone units out of the gates for this product launch,” Daniel Ives, an analyst with Wedbush Securities, said in a note after the event.

“Overall in this volatile geopolitical climate with a general risk-off preference among investors as the horrific and heartbreaking Ukraine invasion causes market jitters, we believe Apple is a safety tech name to own during this market storm. We view Apple as both a Rock of Gibraltar defensive tech name as well as the best 5G tech play in the market with a massive product cycle that is gaining more steam along with its valuable services business which is being undervalued by the Street in our opinion,” Ives added. He maintained his Outperform rating and $200 price target for Apple’s stock.

Shortly before the Apple event came news from Counterpart Research that Apple has dominated market share globally for smartphones. According to its list of the best-selling smartphones in the world in 2021, iPhones took the top five spots and seven of the top ten.

The Samsung Galaxy A12 was the top non-iPhone, with 2 percent, followed by the Xiaomi Redmi 9A with 1.9 percent. The previous iPhone SE, from 2020, was eighth, the iPhone 13 Pro Max ninth, and the Xiaomi Redmi 9 tenth.