The Arctic’s On Fire (You Can Even See It From Space). It Will Get Worse. 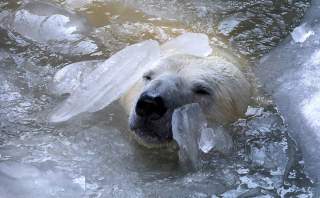 Europe’s historic heat wave is heading north this weekend, to the relief of the continent, but its path will send it right towards the Arctic — where it could speed up the melting of sea ice and coincide with devastating wildfires.

Unprecedented wildfires are currently raging across the Arctic Circle, with some the size of 100,000 football fields — so big they can be seen from space. Arctic sea ice is moreover already running at a record low this year; scientists worry a heat wave will only further exacerbate the area’s problems.

One week after the United States saw record-shattering high temperatures, the same fate befell Europe. On Thursday, Paris saw temperatures of 108.7 degrees Fahrenheit (42.6 degrees Celsius), a record high, with Belgium, Germany, and the Netherlands also facing their own record days. The sweltering weather is the result of a heat dome that has allowed hot air to come north from the Sahara Desert, all while blocking cooler air from reaching people.

July is typically a warm month in much of the northern hemisphere, but climate scientists have connected the uptick in dangerously hot temperatures to global warming, with future years set to be much worse.

Scorching temperatures can be deadly for children, the elderly, and people with disabilities, in addition to anyone without access to cooling systems. In Europe, where air-conditioning is less common than the United States, many residents faced grueling heat without an easy mechanism for cooling off. London, for example, does not have air conditioning in its crowded subway system.

And this recent heat wave is set to do more damage. Norway, Finland, and Sweden are all bracing for their own stint of bad weather this weekend. As the hot air moves north, it could also impact Greenland’s melting ice sheet, which covers roughly 80% of its surface. The country’s rapidly melting ice could eventually mean catastrophic sea-level rise, impacting almost every major coastal city in the world.

There have been more than 100 wildfires burning across the Arctic since June, often ignited by sources like lightning. Russia, Alaska, and Greenland have all been impacted by the blazes, and while wildfires are common this time of year, the current intensity and sheer number have experts concerned. Some of the fires also appear to be burning in peat soils — as opposed to forests — which burn for longer and can release significant amounts of carbon, speeding up global warming in the process.

In a memo released earlier in July, the World Meteorological Organization (WMO) said that the wildfires have released at least 50 megatonnes of carbon dioxide — more than the total annual emissions produced by Sweden.

“The northern part of the world is warming faster than the planet as a whole,” the weather monitoring body warned. “That heat is drying out forests and making them more susceptible to burn.”

Sea ice melt in the Arctic is also a concern. The white ice-covered surface is critical to reflecting sun away from the Earth and keeping temperatures cooler. Without it, dark oceans will warm far more rapidly.

A recent study found that even adhering to the goals of the Paris Agreement might not be enough to save the Arctic’s critical summer sea ice. The agreement aims to keep global temperatures below 2 degrees Celsius (3.6 degrees Fahrenheit) of warming over preindustrial temperatures, with an aspirational goal of limiting the increase to 1.5 degrees Celsius (2.7 degrees Fahrenheit).

Scientists are currently monitoring summer sea ice melt in the Arctic to see if it reaches a record low in September, which would mark a grim new record.