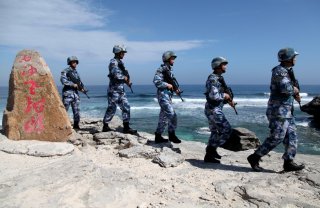 China, for nearly a decade now, has been busy transforming the reefs and atolls and even constructing man-made military-base islands in the disputed waters of the South China Sea.

Such moves have raised fears among rival South China Sea claimants like Vietnam and the Philippines who believe that China is illegally seizing control of the disputed territories and the waters that possess important minerals and marine life.

However, shady planning and the speed at which the islands were constructed are increasingly putting their future viability at risk. Cracks are already appearing to show—not surprisingly, nature is the one that is winning.

“Not everything is going China’s way,” according to the Economist.

“Rumors suggest the new islands’ concrete is crumbling and their foundations turning to sponge in a hostile climate. And that is before considering what a direct hit from a super-typhoon might do,” it continues.

As for the sizeable environmental impacts, many experts think that China believes that these man-made structures are indeed worth the cost.

They “allow China to control the entirety of the South China Sea in any scenario short of all-out war with the United States,” the publication continues.

Adding to the islands’ uncertain future is that they have been deemed highly vulnerable to any attack by enemy forces.

According to the South China Morning Post, the Beijing-based monthly military magazine Naval and Merchant Ships “highlighted the artificial islands’ weaknesses in four areas: their distance from the mainland, small size, the limited capacity of their airstrips, and the multiple routes by which they could be attacked.”

It continues: “These artificial islands have unique advantages in safeguarding Chinese sovereignty and maintaining a military presence in the deep ocean, but they have natural disadvantages in self-defense.”

The magazine, which is published by the navy shipbuilder China State Shipbuilding Corporation, also noted that the islands are located too far from the mainland, which would make it more difficult to quickly offer military support in case of an attack.

“Take the example of the Fiery Cross Reef. It has a runway now, but it’s 1,000 km (600 miles) away from Sanya city in Hainan province,” the article writes.

Such a distance would likely mean that—even utilizing China’s fastest combat support ships—it would take more than twenty hours to reach the islands.

As for the possible deployment of J-16 strike fighters, they “could not patrol the area because of the distance and could be easily intercepted or attacked by surface ships,” the paper claims.