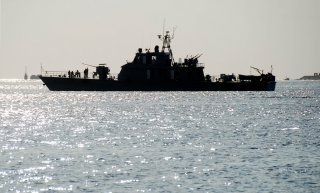 A year ago Iran sent multiple fuel tankers to Venezuela to aid its Western Hemisphere ally during the latter nation's fuel crisis. Now a pair of Iranian Navy ships, including a frigate, has rounded the Cape of Good Hope and is believed to be making a high-seas voyage to Venezuela. The second vessel was reported to be the Makran, an oil tanker that was converted into a floating forward staging base.

While the passage of the ships into the Atlantic Ocean isn’t a concern—and warships from many nations regularly made distant port-of-call visits around the world—it is unclear exactly what the motivation is for Tehran beyond showing its capabilities to deploy vessels so far from its shores.

Washington is carefully monitoring the situation and trying to determine what exactly the Iran vessels might be carrying. Last month, USNI News reported that seven fast-attack boats could be seen in satellite imagery taken of the converted tanker. Some Biden administration officials have already expressed concerns that the Iranian vessels could be carrying weapons—and Tehran has been put on notice that the United States will respond if that turns out to be the case.

One concern is that the fast attack boats, which can be armed with a variety of weapons including small arms, anti-ship missiles and even torpedoes, could be transferred to the Venezuelan Navy—providing the South American nation with the ability to conduct swarming operations against military or commercial shipping in the Caribbean Sea.

“While DoD will not comment on intelligence matters, we would note that the delivery of such weapons would be a provocative act and a threat to our partners in this hemisphere. As such we would reserve the right to take appropriate measures— in concert with our partners—to deter the delivery or transit of such weapons,” Pentagon spokesman John Kirby said in a statement to CNN.

Last year there were concerns that Beijing was helping arm and bolster the Venezuelan Navy.

Is a Stronger Iranian-Venezuelan Alliance Brewing?

Both Iran and Venezuela are already subject to harsh U.S. sanctions, while they remain allies and trading partners.

The two nations have been drawn together by mutual anti-U.S. sentiment—and each is a founding member of the Organization of Petroleum Exporting Countries (OPEC). Moreover, when the Shah of Iran was overthrown in the 1979 Islamic Revolution, Venezuela was one of the first nations to recognize the government of the Islamic Republic.

For more than two decades the two countries’ collaboration was largely limited to the oil industry, but under the rule of the late President Hugo Chávez, Venezuela reached more than three hundred agreements with the government in Iran.

Tehran could be using the mission to simply highlight its growing naval capabilities. Currently, the Iranian Navy lacks the ability to conduct true “blue water operations”—those in the open oceans at great distances from its home ports for an extended period—but this could be a sign that Tehran has intensified its efforts to expand beyond the Persian Gulf or even the Arabian Sea.

Past efforts to sail around the Cape of Good Hope have ended in failure for Iran, but the Middle Eastern country is clearly redoubling its efforts. Yet, even if successful that won't mean Iran will have a blue water naval force or even the capability to operate globally, but it would be an important first step. Moreover, closer ties between Iran and Venezuela could allow the Islamic Republic to establish a true foothold near to the United States. That would certainly be a serious concern for the U.S. Navy—but first Tehran needs to prove its vessels can actually make the trip and return home safely.