Are Israel and Hezbollah on the Path to War? 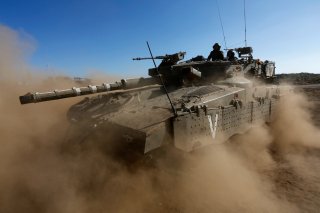 One of the first consequences of a return to the Iran nuclear deal will be the thawing of large quantities of Iranian funds overseas, giving the Islamic Republic access to tens of billions of dollars. The nuclear deal has nothing to say about Iran’s regional destabilizing activity or its missile program, which means that with its new war chest Tehran will be sure to strengthen its proxy organizations whose weapons are pointed at Israel.

No one should doubt that Iran’s commitment to Israel’s destruction is genuine.

Hezbollah in Lebanon is Iran’s main proxy and stands at the core of its proxy project. It is the flagship Iranian project in the Middle East and Hezbollah will thus be a central recipient of newly available Iranian funds.

Iran will use its new strength to try and consolidate its position as a regional power. Taking advantage of the American retreat from the Middle East, Iranian attacks will continue and become even more daring. American targets have already been attacked without response.

Iranian proxies are equipped with advanced weapons, meaning they are far more than terror organizations. They should be seen as military threats.

Iran is encircling Israel with these organizations. Its mission is twofold: developing capabilities to harm Israel, and simultaneously deterring Israel from acting against Iran’s nuclear program.

On the one hand, Iran wants to become a threshold nuclear state, and on the other, it is building capabilities to stop Israel from challenging its nuclear advance.

Against this background, Hezbollah has, since the end of the 2006 Second Lebanon War, built up an unprecedented degree of firepower in Lebanon, totaling some 150,000 projectiles.

These include hundreds of precise weapons such as surface-to-surface missiles with large warheads that can hit strategic targets and population centers in Israel, causing unprecedented damage. Its arsenal also includes sea-to-shore missiles and surface-to-air missiles. The size of Hezbollah’s arsenal is marched by its well-developed operational concepts, which are based on the experience it gained through its participation in the Syrian Civil War.

Hezbollah’s battle experience together with its massive arsenal amounts to a severe military threat against Israel emanating from Lebanon—a threat that has grown to monstrous proportions, yet has passed under the perception radar of much of Israel’s civilian population, which takes a greater interest in Gaza.

Hezbollah’s leadership is growing more daring, as a recent aerial violation of Israel’s air space through a remote-controlled aircraft reminds us. The declaration by Hezbollah secretary-general Hassan Nasrallah of his ability to convert thousands of unguided rockets into precision-guided missiles should be taken seriously.

Hezbollah has displayed threatening maps of Israel showing that it can hit an array of sensitive targets between Hadera and Gadera, a region covering the country’s densely populated center and the location of most of its economic, industrial, and strategic infrastructure.

Attacks attributed to Israel in Syria, as part of the grey-zone campaign against Iranian entrenchment and weapons trafficking to Hezbollah, have partially disrupted weapons smuggling to Lebanon, but they do not alone have the power to stop Hezbollah’s force build-up.

The combination of Hezbollah’s ideological extremism, its calls for Israel’s destruction, and its arsenal mean that it forms a state-level military threat. Nasrallah will at some point pull the trigger when he and his Iranian sponsors feel the time is right.

This could come as a response to an Israeli attack on Iran’s nuclear program.

In the event of such a war, combat is unlikely to be limited to a restricted number of “battle days.” Israel, for its part, will be interested in using the opportunity to remove most of Hezbollah’s capabilities from the arena, and will seek to not be dragged into rounds of limited conflict as it has been in Gaza.

Hezbollah could try to limit the conflict to a few “battle days,” but for Israel, this would represent a missed opportunity to reshape its strategic environment for many years to come. Thus, the scenario of limited Israeli-Hezbollah conflict is less likely. In addition, other Iranian proxies and partners, like Hamas and Palestinian Islamic Jihad in Gaza, Shi’ite militias in Syria and western Iraq, and the Houthis in Yemen could all join in the combat.

In the past year, Hezbollah has been accelerating its force build-up program, creating new strategic realities in Israel’s region. In essence, a monster is being built in Israel’s backyard by the Iranians, and the international community is powerless to stop it.

As Hezbollah’s arsenal grows, the cost it can extract from the Israeli home front in a future war keeps growing too. The scope of damage and casualties that Israel would experience would be unprecedented and would represent a sub-existential threat. Multi-story buildings would crumble, and a very large number of civilian casualties (injuries and deaths) would ensue, climbing into the thousands. Yet if Israel were to strike first, rather than waiting for Hezbollah to act against Israel, the results would be significantly less damaging for the Israeli home front.

As the threat grows, Israel’s leadership is approaching a decision junction. After three years in which the country lacked political stability and a set budget, disrupting military plans, Israel is returning to itself in all ways.

As things look today, Israel and Hezbollah are on an unavoidable military collision course, and Israel’s leadership must make fateful decisions.

Naftali Granot is a publishing expert with The MirYam Institute. Granot retired from the Mossad in 2007 after twenty-five years of active field service as the head of the HUMINT division and deputy director.