Are NATO and Russia Headed Towards a Showdown in the Black Sea? 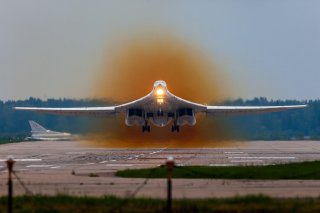 Moscow has taken notice of a fourth NATO warship in the Black Sea in just the past three weeks. While deployments of NATO vessels to the region aren’t actually all that unique, Russia has made clear that it will monitor the movements of all warships in the neutral waters. It was just two weeks ago that elements of the Russian Black Sea Fleet were reported to have fired warning shots at the Royal Navy guided-missile frigate HMS Defender as the British vessel sailed near the Russian-control Crimea following a port-of-call visit to Ukraine.

Days after the Defender incident, Russian Su-30 fighters and Su-24 bombers then repeatedly made low flying "mock attacks" over the Dutch Navy’s frigate HMLS Evertsen. The Dutch Defense Ministry responded that the Russian actions to “repeatedly harass” its warship were “unsafe,” “aggressive” and “irresponsible.”

It was last week that Russia’s National Defense Control Center announced that it was closely monitoring the Italian Navy’s guided-missile frigate Virginio Fasan (F 591), which entered the waters on Thursday. The Italian Defense Ministry responded that the warship, which is part of the NATO Standing Maritime Group 2, was deployed to the Black Sea as part of NATO’s ongoing annual Exercise Sea Breeze 2021 (SB21) in the region. The drills include warships and personnel from more than thirty nations.

Russia has also responded with its own military exercises in the region.

It's unclear why Russia is calling out particular warships. On Wednesday, its control center announced that the Russian Black Sea Fleet was now keeping a close watch on the course of a Spanish Navy’s patrol vessel as it entered the Black Sea.

“The Black Sea Fleet’s forces and capabilities have started to track the Spanish Navy’s patrol vessel Rayo that entered the Black Sea on July 7, 2021, to participate in the Sea Breeze multinational exercise of NATO member states and partner countries,” the control center said in a statement to Tass.

Rayo (P-42) is the second of six Meteoro-class corvettes that were designed and built to operate in the distant maritime zone. Spain originally announced plans to build a dozen of the warships, and the remaining six—which will include modifications for use as an oceanographic and underwater rescue—is scheduled to begin next year.

The P-42 entered service with the Spanish Navy in 2011. The corvette, which has a crew of forty-six sailors and can carry an additional thirty marines, is primarily deployed in the protection and escort of other ships in low intensity and asymmetric warfare situations, as well as in control of maritime traffic. The Meteoro-class can also be used in operations against drug and human trafficking and to provide support for crisis situations and humanitarian aid.

The corvettes have a top speed of 20 knots and are armed with a single OTO Melara 76-millimeter main gun, two 25-millimeter Mk-38 secondary guns, and a pair of 12.7-millimeter (.50 caliber) M2 Browning machine guns. The vessels carry an Augusta-Bell 212 patrol helicopter.